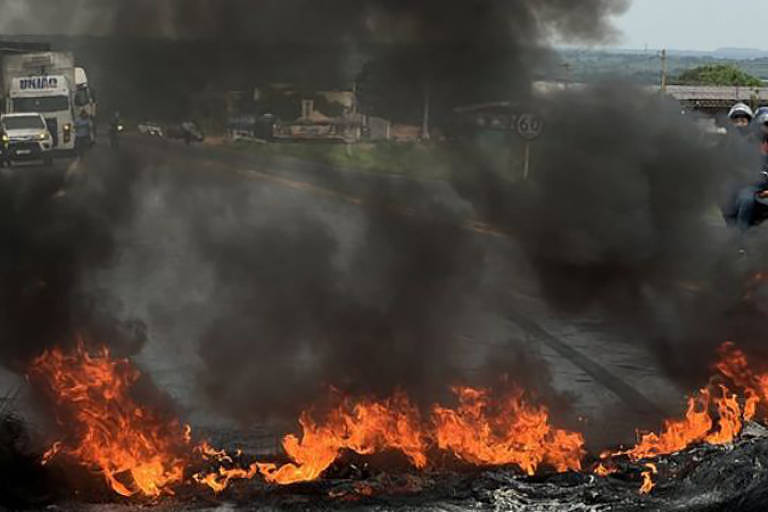 The reports of travelers ‘trapped’ on highways by blocking Bolsonar truckers

Banker Caio Guitton lives in São Paulo and traveled to Rio de Janeiro to vote on Sunday (30). He would return home the next morning. However, his plans were changed when he went through an experience that he regards as harrowing.

Caio was on a bus that left Rio de Janeiro at dawn on Monday and was heading towards São Paulo. He planned to arrive in São Paulo about seven hours later. However, the route was interrupted due to a blockage on the road, caused by a stoppage of supporters of the defeated president Jair Bolsonaro (PL) – among them, many truck drivers.

“I left Rio de Janeiro around 11:40 pm, because I wanted to arrive in São Paulo around 6 am to go to work. But around 1:40 or 2 am, the bus stopped at Via Dutra, in Barra Mansa (RJ) and was left in darkness, nobody knew what was happening”, says the banker to BBC News Brasil.

“Later, around 2:20 am, the highway concessionaire put a note on the website in which they reported about the truck drivers’ demonstration. Then I understood what was happening”, he adds.

He needed to find a way to go to a bus station to return to Rio de Janeiro and, still without a date, return to São Paulo.

The protest that stopped the traffic of Caio’s bus is an example of a measure taken by Bolsonarista truck drivers from several states: they closed highways in a demonstration against the election of Luiz Inácio Lula da Silva (PT).

In Mato Grosso, teacher Simone (not her real name), who lives in Cuiabá, was on a trip to a city in the interior of the state when the bus she was on stopped on the road. “We were supposed to arrive in Barra do Garças (MT) at 6am, but we arrived at 12pm”, she says.

So far, these demonstrations have been recorded on highways in 16 states, according to the Federal Highway Police (PRF). Across the country, the regions affected by the movement had long traffic jams, which reached up to more than 12 hours.

The protest caused a major traffic jam on Via Dutra, says Caio. As the day dawned, he noticed the “endless” line of parked vehicles. “There was a traffic jam for about 4 kilometers in front of the bus and behind it was even bigger”, he details.

“It was a distressing situation. We’ve been watching the war in Ukraine for months, with miles of traffic jams and we never think it will happen to us. It’s a feeling of total obscurity”, he comments.

He classifies the situation as “something similar to a mixture of war in Ukraine with The Walking Dead (American series) Tupiniquim”.

The banker believes that much of this situation could be avoided if Bolsonaro made a statement in which he accepted Lula’s victory – he has not commented so far.

“A good part of all this could perhaps have been avoided if there was a democratic gesture (by Bolsonaro) to accept the result of the polls and reduce the exalted spirits”, he comments.

At around 11 am, he left the bus. “I needed to work and I was apprehensive. Some people started to leave the bus when the day dawned. I put a deadline until 11 am to see if anything would happen, but nothing changed. So at 11 am I got off the bus and started looking for some alternative route on the highway”, he details.

Shortly before leaving the vehicle, he discovered, through social media, that a co-worker, Beatris Sá, was also stopped on another bus in the traffic jam. The two descended on the highway at the same time.

“We walked along the highway for about 20 minutes. It was scary, because there was a lot of traffic”, he says.

They got a ride with a stranger they saw in the opposite direction of the road and went to the bus station in Volta Redonda (RJ).

“Now we are going back to Rio de Janeiro to try to buy a plane ticket to get back to São Paulo”, says Caio. He says that there is no possibility, at least this Monday, of being able to return by bus.

For Professor Simone, the Bolsonaristas’ demonstration is an act “totally undemocratic, which does not respect and does not accept the system and the electoral process”. She assesses that there is not a “really fight-worthy agenda”.

“It is (a protest) out of pure and simple discontent with the result of the elections and with the desire of almost 51% of the population”, he declares.

In the roughly six hours she was on the bus on the stopped highway, she says she was “drift” along with the other passengers.

“Many passengers were angry because they were with children, sick people, hungry, thirsty and the like. The pro-Bolsonaro movement was questioning the results of the elections and disregarded our right to come and go”, he declares.

At one point, the truck drivers opened the way for the vehicles that were in the traffic jam on the Mato Grosso highway. “But I don’t know if it was a full or partial release,” he says.

The repercussion of the movement

Although the proportion of the protests has not spread like the 2018 strike, the movement causes concern.

The demonstration after Lula’s victory has divided truck drivers. While some reinforce that the movement should grow more and more in protest of Lula’s election, others defend that the category respects the PT’s election.

“The demonstrations are growing rapidly, and there is no immediate intervention by the PRF as there has been on other occasions. In addition, Bolsonaro’s delay in speaking out may contribute to the spread of protests,” said Wanderlei Dedeco, a truck driver from Curitiba, Paraná. , who acts as “adviser” to the truck drivers’ leaders.

In an interview with BBC News Brasil, Dedeco says he is against the strikes and says that, until the beginning of this Monday, he did not believe that the protests would last for a long time, but hours later he began to see the scenario with “other eyes”, after noticing growth. in demonstrations across the country.

The Attorney General’s Office asked this Monday that the director general of the PRF, Silvinei Vasques, provide clarification within 24 hours about roadblocks by truck drivers and clarify the measures taken to release the flow of vehicles.

In a statement, the PRF states that it has taken steps to return the affected roads to normality since Sunday night. “Directing teams to the locations and initiating the negotiation process for the release of highways, prioritizing dialogue, to guarantee, in addition to free and safe transit, the right of citizens to demonstrate, as happened in other protests”.

In addition, the PRF claims that it activated the AGU (Advocacy-General of the Union) to be able to free blocked roads.