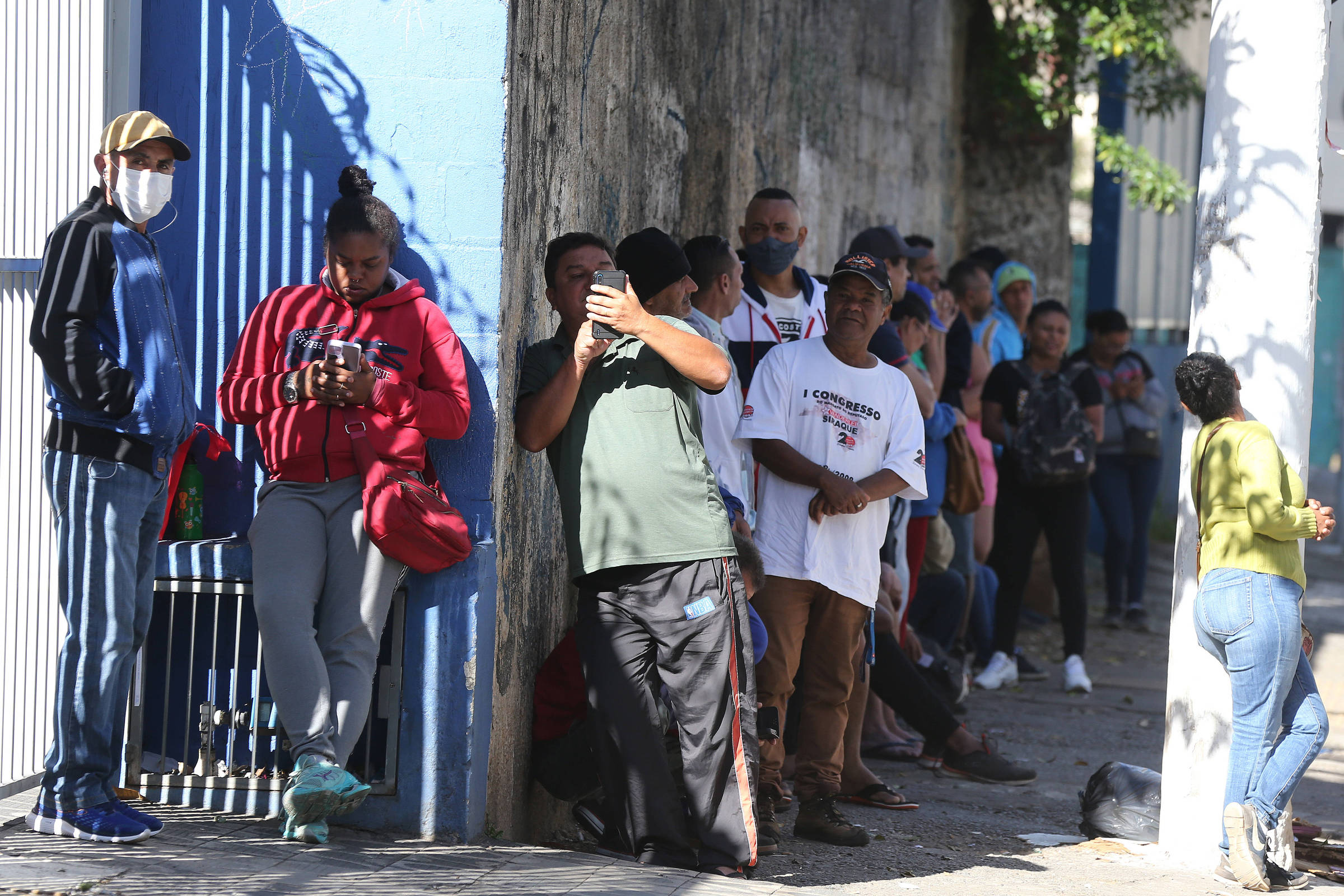 Auxílio Brasil loan is enough to pay bills, buy food and even for Christmas dinner

Beneficiaries of Auxílio Brasil got up early in the queue at Caixa Econômica Federal branches this Thursday (17) in search of a payroll loan, in São Mateus and Itaquera, in the east zone of São Paulo. Buying food, paying bills and even saving a little for Christmas dinner are among the plans of those who applied for credit at public bank branches.

Caixa began paying the November installment of the benefit this Thursday and payments continue until November 30th. The search for a loan comes after the Auxílio Brasil payroll was suspended at the bank for about two weeks. The suspension began before the second round, on the recommendation of the TCU (Union Court of Auditors), and ended this Monday (14), after a stoppage for Dataprev (a technology company of the federal government) to process the payroll.

Caixa claims that it carries out several actions to improve service. Especially at the branches in Itaquera and São Mateus, bank employees perform the so-called “qualified reception” one hour before the opening of the units for pre-service to preferred customers, distribution of passwords and guidance.

“All those who arrive before 4 pm are attended to on the same day”, says the note. Caixa attributes the increase in movement to the extended holiday and the start of payment of aid in November.

The cleaning lady Heleilde Reis Viana Marques, 35, was one of the first in line. She arrived around 5:15 am with the aim of taking out the loan to buy clothes for her 12-year-old son, pay bills and use part of the amount for Christmas dinner.

Heleilde tried to access the payroll on Wednesday (16), but says that the bank had no system. As you receive it through the benefit card —and not through Caixa Tem— the contract is at the bank branch or at the lottery outlets.

The cleaning lady expects to borrow about R$ 2,400 or more. The maximum amount is R$ 2,569, according to calculations by Anefac (National Association of Finance, Administration and Accounting Executives). “I don’t know how much it will release, but for me I take the maximum,” she says.

She claims that she is prepared for the monthly discount on the benefit installment, of up to R$ 160, but plans that, in 2023, she will be able to do more cleaning and cover the embezzlement in the budget. Currently, it only has two fixed houses.

Magno Claro Silva, 44, was the first to arrive in the queue at Caixa, at 5 am. His expectation is also to get the maximum loan amount. Silva says that he researched on the internet and there was a bank offering up to R$5,000, but he is not interested in taking out a loan through another institution. “Since I get it straight from Caixa, I prefer it.”

Currently unemployed, he has already worked with a formal contract in the metallurgy sector and in commerce. Today, he does odd jobs taking care of a stud farm in the metropolitan region of São Paulo and also as a waiter or kitchen help in restaurants in the capital.

Attentive to the news, he says that he did the math to get a loan that fits the budget and that he is following the PEC (proposed amendment to the Constitution) of the Transition. “The PEC has already been delivered, the money will continue. Even if I lose the benefit, I know I have to pay, so I’m going to do more odd jobs so I don’t ‘hang myself'”, he says.

Unemployed, Érica dos Santos, 37, borrowed money from the lottery. She will use the money to pay off debts and buy food, including fruit and vegetables, for herself and her 15-year-old son. “I was a bit hesitant to take it, for fear of debt, but it worked.”

The amount released was R$ 2,300. Érica was unable to say how much the monthly installment will be, although she received the contract with the loan details. As she has a NIS (Social Identification Number) ending in 1, she receives the aid this Thursday and only then will she know how much the discount on the benefit will be.

Installment starts to be deducted from the first payment

The discount of the installment of the Auxílio Brasil payroll loan starts to be made in the next payment after contracting, according to the rules of the loan. However, those who had hired the payroll in the first few days received information that the discount would only occur in December.

The flaw in the information provided by Caixa confused citizens, as the date December 7 appeared in the “first installment” field. After a wave of complaints, Caixa started to send messages, through Caixa Tem, to inform that the first installment will already be debited in November.

Beneficiaries receive the following notice on their cell phones: “Your loan installment is debited automatically from the first benefit to be received after contracting. The date of 12/07 that appears on the contract statement is the deadline for Caixa to receive the value of the Ministry of Citizenship.”

Beneficiaries also complained of undue loan. Box says it will cancel. For this, you need to apply to the agency.

Caixa started paying the Brazil Aid for November this Thursday (17). Unlike what it did before the election, the Bolsonaro government chose not to advance this month’s installment. The release of values ​​will continue until the 30th, according to the end of the NIS. Those with NIS ending in 1 receive first, and so on until the last day, when the money will be released for NIS ending in zero.

This month, part of the beneficiaries will also receive Gas Aid.

PAYMENT CALENDAR FOR BRAZIL AID FOR NOVEMBER AND DECEMBER

HOW TO DO Auxílio Brasil loan THROUGH CAIXA TEM

There is in the box

At a Caixa Aqui correspondent or at a Caixa branch

IN AGENCIES, LOTTERIES AND CORRESPONDENTS

Employees of financial institutions must inform the beneficiary who wants to take out the loan: