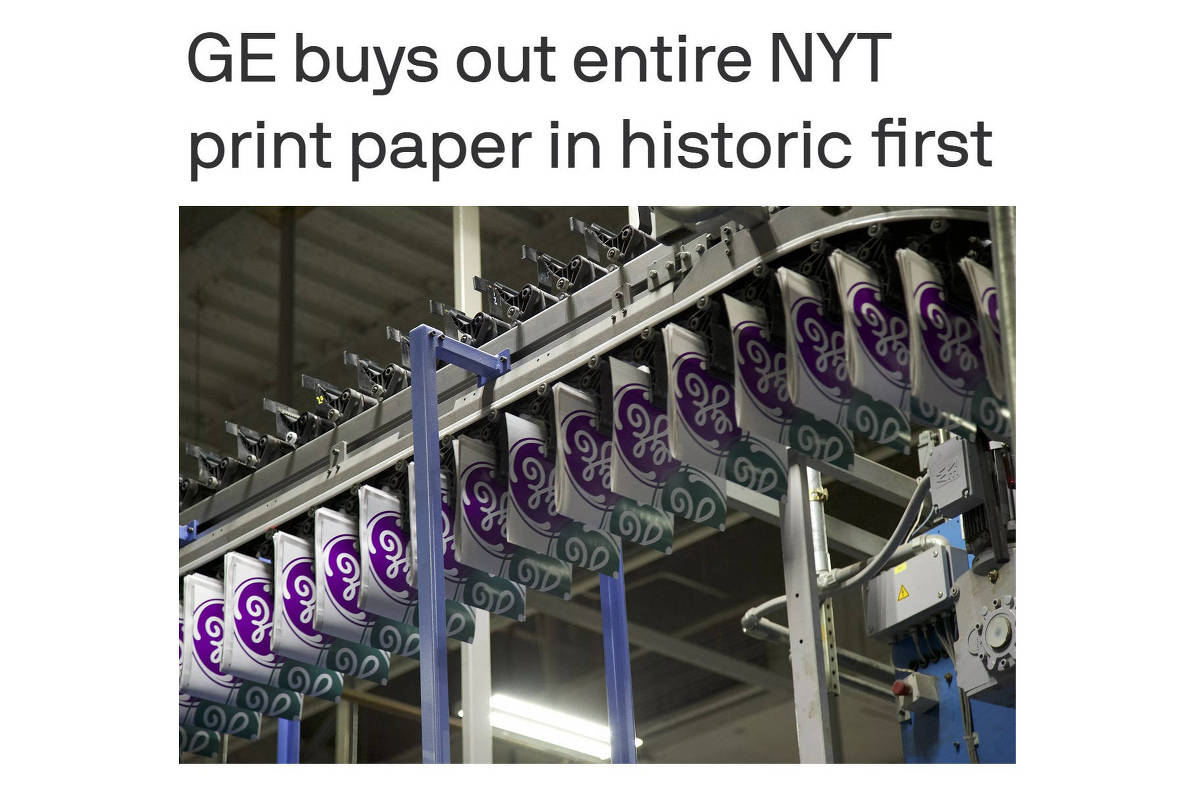 Nelson de Sá: For the NYT, the two sides of the end of Jack Welch’s GE story

The New York Times’ Dec. 6 issue was seen as “historic” in advertising. In fact, “for the first time in the newspaper’s 171-year history,” reported the Axios website, a single advertiser guaranteed exclusivity, plus something close to that on the website and other extensions (podcast, newsletter).

On the dust jacket, surrounding the printed newspaper, the three logos in different colors of GE or General Electric, as the company founded by Thomas Edison 120 years ago was better known.

It was proclaimed, on the front page and in advertisements spread across another 22 full pages, “How focus takes us further.” It was the publicity slogan to confirm that what was once the largest company in the world will now break into three, with different focuses: GE Aerospace, which will be its legal successor, GE Vernova and GE HealthCare.

The millionaire campaign (“seven figures”, says Axios) was a partnership with the newspaper, to the point of taking the main NYT and GE executives together to the printing plant in Queens, for a shooting ceremony.

One of the ads, a full page, showed “how to create a folding paper airplane using a visual guide”, according to a Guinness world record holder for keeping a paper airplane in the air.

Six months earlier, a journalist from the same New York Times, David Gelles, released a book that became a “bestseller” by pointing out what would have led GE to that point, “The Man Who Broke Capitalism”, the man who broke capitalism (Simon & Schuster, cover above).

Subtitled, “How Jack Welch Shattered the Heart of the Country and Crushed the Soul of Corporate America—and How to Undo His Legacy.” In short, as Ken Auletta of the New Yorker describes it, “why GE and so many companies run by disciples of Welch have sorely stumbled, along with Welch’s reputation.”

GE’s CEO from 1981 to 2001 rebuilt the company, according to the book, “using three tools in his crusade: cuts [downsizing]Business [dealmaking] and financialization [financialization]”. Among his disciples, as Gelles describes extensively, the Brazilian Jorge Paulo Lemann stands out.

According to the author, Welch transferred operations and jobs to other countries, made costly acquisitions such as the NBC network, sold little by little, and started financial bets on “subprime” and short-term loans that cost the company dearly in the 2008 crisis —when the even NYT ran the headline “GE (!) is in trouble”, it’s in trouble.

About what happens now, Gelles said, in an interview with NPR, but not in the NYT:

“Far from being the most valuable company on Earth and a conglomerate spanning the globe, GE will essentially be split into three discontinuous pieces. And that’s the end of the story. It’s what’s left of Jack Welch’s legacy.”

Facebook
Twitter
Pinterest
WhatsApp
Previous article
TST cuts pilot strike and reduces downtime to 10% of the crew
Next article
Panel SA: Two out of every ten LGBTQIA+ have already been attacked in means of transport