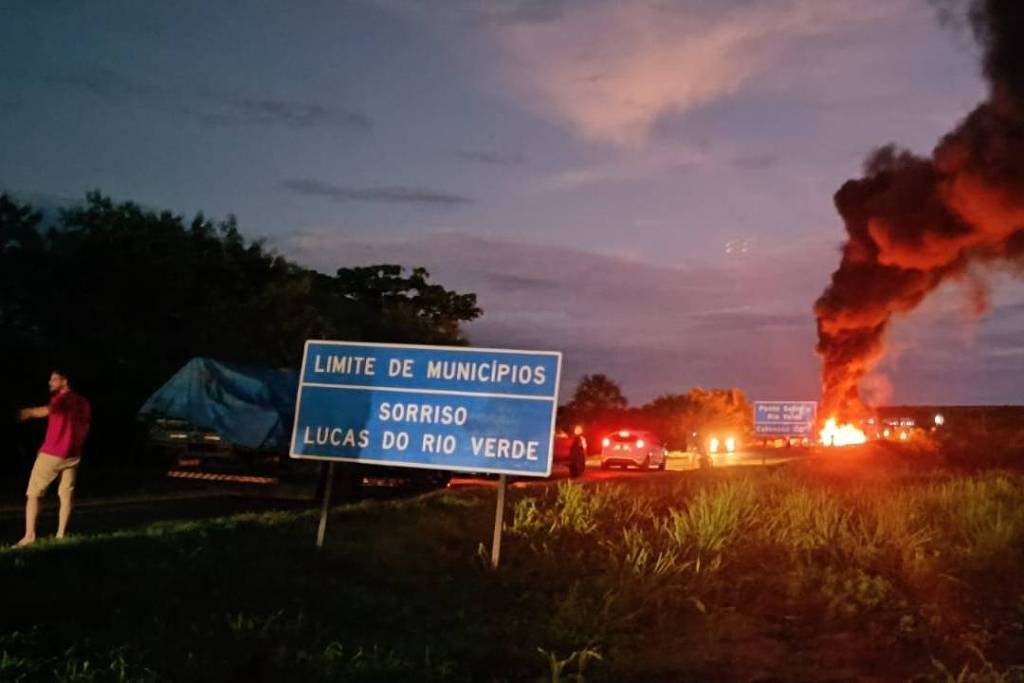 Highways are released, but extremists close new stretches in MT and PA

The highways of four states that had been blocked by extremists this Sunday (8) were released by security forces in the early hours of this Monday (9).

Protesters, however, organized new blockades and closed the BR-163 in at least three points. According to the Federal Highway Police, the highway is blocked at two points in the municipality of Progresso, in the south of Pará, and at one point in the city of Matupá, in the north of Mato Grosso.

The road closures come after a new escalation of anti-democratic acts in Brasilia that resulted in attacks on police, journalists and the depredation of the National Congress, Planalto Palace and STF (Federal Supreme Court).

This Sunday, the state of Mato Grosso was the hardest hit by the coup protests, with blockades on at least five stretches of federal highways.

Coup-supporting demonstrators burned tires and blocked stretches of BR-163 near the municipalities of Lucas do Rio Verde, Sorriso Sinop, Guarantã do Norte and Nova Mutum. The cities are among the main centers of agribusiness in the country.

There was also a block on the BR-174 highway, northwest of the state, close to the municipality of Castanheira. The road has been cleared.

This Monday morning, the government of Mato Grosso informed that the blockades were released after joint action by the Military Police, Fire Department and Federal Highway Police.

He also informed that the Civil and Federal Police are investigating the authorship of possible crimes related to the actions, especially in the damage caused to the bridge under the Rio Verde, in Lucas do Rio Verde.

“The Government of Mato Grosso does not condone movements that impede the guarantees of rights and people’s coming and going,” the government said in a note.

In the state of São Paulo, all highways are free of terrorist blockades. Blocked by Bolsonarists in a stretch in the interior of São Paulo on the night of this Sunday (8), the Anhanguera highway was completely freed on the morning of this Monday (9).

According to Autoban, the concessionaire that manages the highway, at 10:42 am today, the expressway towards the interior of the capital, at km 15, final 13, has congested traffic, a reflection of congestion on the marginal roads.

The Imigrantes highway loop, for the interconnection at km 42 towards Anchieta, and the return loop at km 40+200 towards the coast, are blocked due to weather conditions, says Ecovias.

In Santa Catarina, the blockade of the BR-101 highway, which had been closed by extremists at the time of the municipality of Itajaí, was dissolved.

The scenario is similar in Paraná, where two points on the BR-277 highway that had been blocked, near the municipalities of Medianeira and São Miguel do Iguaçu, were released.

The government of Paraná informed that the Military Police of Paraná acts to clear the highways and that no clashes with demonstrators were registered.

In a note, the Federal Highway Police informed that it continues with the uninterrupted monitoring of conditions on federal highways across the country.

He also highlighted that the interdictions “flagrantly violate, among others, the constitutional right to come and go” and that it adopts protocols for clearing roads that range from direct negotiation to the progressive use of force.

“The PRF points out that in all cases its action is within the legal prerogatives – human rights are always preserved – and its priority is to restore public order and road safety”, he informed.