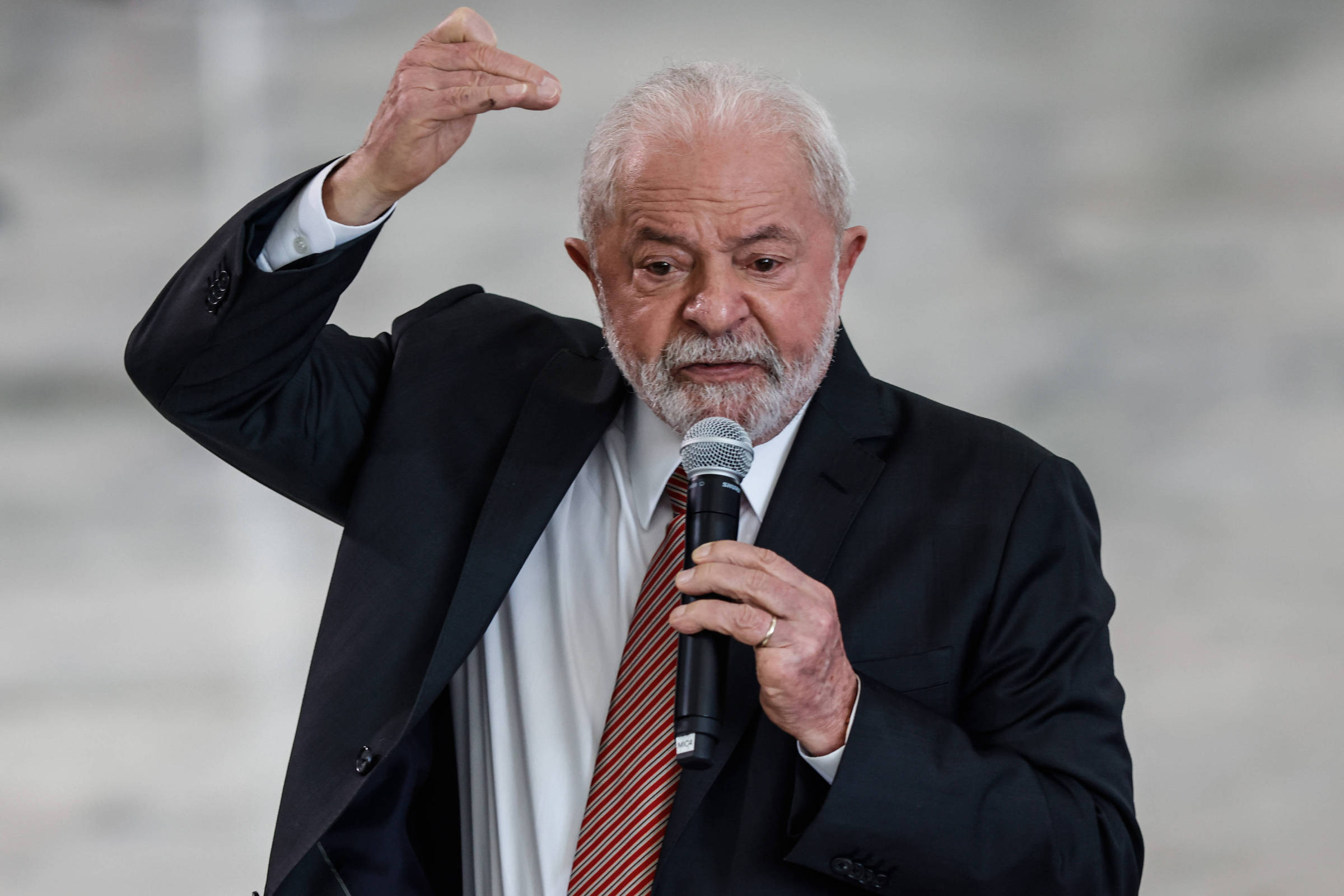 The promise of President Luiz Inácio Lula da Silva (PT) to exempt from IR (Income Tax) those who earn up to R$ 5,000 per month threatens to significantly reduce federal revenue and makes the task of formulating a package of changes linked to to the tribute. The measure is demanded by Lula while Minister Fernando Haddad (Finance) seeks to implement a package to reduce the gap in public accounts.

With the lack of adjustment in the table since 2015, currently everyone with taxable income greater than R$ 1,903.98 per month pays Income Tax. The lag reaches 148% since 1996 (when the full update stopped being done), according to the Sindifisco (Union of Tax Auditors of the Federal Revenue Service).

The entity calculates that updating the table due to inflation over the last 26 years would raise the exemption range to approximately R$ 4,600. Today, those who earn more than R$ 4,664 pay the maximum rate.

Economists on Lula’s team had been working with lower amounts to readjust the exemption range, between R$2,500 and R$3,000. To reach the R$5,000 advocated by the president, the calculated cost would exceed R$100 billion, with a risk of touching R$200 billion.

The value is close to the entire deficit calculated for 2023, of R$ 231 billion. To reduce this hole, Haddad this month proposed a set of measures to, mainly, increase revenue by reversing tax cuts made during the administration of Jair Bolsonaro (PL).

The size of the bill obliges the government’s economists, who were working with a milder increase in the exemption, to go back to their calculations to avoid a significant imbalance.

Cost estimates with the highest IR exemption are being made by different institutions. The collection as a whole is compromised because the increase in the exemption “pushes” the other brackets, creating a domino effect that reduces government revenue. The projected values ​​for this loss fluctuate depending on the parameters considered.

It is also not possible to specify the real impact of the measure, as the government can not only change the exemption range, but also change existing rates, deductions or benefits to compensate for the gap caused.

One of the more moderate estimates is that of the Sindifisco itself. The entity projects that the tax impact to cover the exemption for those earning up to R$ 5,000 would be R$ 21.5 billion. The total impact considering all ranges would be R$ 106.5 billion.

The union is in favor of correcting the table, but defends the adoption of progressive measures to compensate for the loss of revenue. Among them, the return of taxation of profits and dividends.

A report by XP Investimentos, signed by economist Tiago Sbardelotto, estimates that the tax impact would be between R$ 122 billion and R$ 171 billion, depending on the hypothesis of correction of the tax ranges and reductions in deductions.

In the report, Sbardelotto deals with the difficulties in achieving the value sought by Lula.

“The current dynamics of public accounts would not support such a reduction in revenue, especially with the increase in expenses expected for 2023”, says the text, which brings self-financing scenarios for the measure, but with smaller exemption ranges.

“If the choice is for exemption up to R$ 5,000, changes in the structure of the tax will be necessary, the adoption of higher rates and the end of some deductions and exemptions so that the result is close to neutrality.”

Gabriel Barros, partner and chief economist at Ryo Asset, former director of the IFI (Instituição Fiscal Independente, a Senate body that monitors public accounts), arrived at similar figures. It projects a global impact of between BRL 110 billion and BRL 173 billion.

“It is a very high figure and gives the feeling of unbridled fiscal expansion, without the care that the issue deserves”, he says. “I think it’s a mistake to address this issue now.”

Sought, the Federal Revenue declared that it does not disclose data on the subject until a measure regarding the increase in the exemption range is official.

Last Wednesday (18), Lula returned to demand an effective solution to the issue. “My companions know that I have a fight with PT economists [para garantir a isenção de IR para quem ganha até R$ 5.000]”, said the president in a public ceremony with union members.

What members of Haddad’s team think

During the campaign, two economists who are now in the government addressed the issue of income tax. They are Guilherme Mello, head of the SPE (Secretary for Economic Policy), and Bernard Appy, special secretary for tax reform.

Both dealt with the need to raise the exemption range, but in smaller amounts, and included in the strategy the return of taxation on profits and dividends — in an attempt to charge more from the richest, as requested by the president.

When talking about tax reform, four categories of taxes need to be kept in mind: consumption, income (including capital), labor (including payroll) and wealth. In addition to the changes in charging income, the team is thinking of making changes associated with other modalities.

Mello worked to consolidate proposals for Lula’s government program. As a whole, initially, the economists of the coalition that elected Lula worked informally with increasing the exemption range to R$3,000, and were surprised in October, still during the campaign, when Lula warned that the exemption would rise to R$5,000.

The group proposed that the return of taxation on profits and dividends should have progressive rates in order to equate taxation on capital income with taxation on labor income. At the same time, there would be a reduction in taxation on company profits.

The announced proposal was, in the end, to maintain the current total load and guarantee the company an effective rate within the international average.

At no time were the amounts of the rates or other details disclosed, on the grounds that it would be necessary to negotiate with the elected parliamentarians.

At this moment, the Ministry of Finance awaits the election of the presidents of the Chamber and of the Senate, after the recess, to advance with the tax reform in Congress. Haddad has already announced that the reform of taxes on consumption will be sent in the first semester, while the reform that deals with income would be addressed in the second semester.

Appy’s proposal, in turn, had a greater level of detail and can be seen in full in a public document on the internet entitled “Contributions to a Democratic and Progressive Government”.

The basic principle considered is that the readjustment of the table is necessary, but as the cost is high and competes with other priorities, especially the exemption from the payroll for lower-income workers, it would be necessary to incorporate joint changes in taxation on labor income and capital, including a mechanism to inhibit pejotization (in which the worker becomes a company for tax purposes and receives income with lower taxation than that paid by a professional with a formal contract).

With regard to the Income Tax table, the document suggested a more moderate increase in the exemption range, which would rise to up to R$ 2,500. At the same time, the other bands would be raised by the same difference in reais (a little less than R$600), along with a review of benefits.

To avoid new lags, the table would be adjusted annually for inflation.

At the other end of the table, there would be the creation of an additional rate of 35% for those who earn more than R$ 15,000 per month, or R$ 180,000 per year. To avoid pejotization, changes in payroll taxation and also in taxation on capital gains would occur in parallel.

In this case, Appy considered that it is necessary to review taxation on formal worker income, which is very high, but without proportional returns, as well as taxation on business partners.

“It is true that contributions on the payroll generate benefits for the worker, but, in relation to the portion of the salary exceeding the contribution salary ceiling for the INSS [R$ 7.087,22], the payment of the contribution is not reflected in the social security benefit, the amount of which is limited to the ceiling. For this portion of the salary, the tax wedge is around 40%, that is, the worker’s net salary is around 60% of the cost for the employer”, says the text of the proposal.

“On the other hand, a relevant portion of high-income professionals in the country receive their remuneration through companies with simplified tax regimes, of which they are partners. It is the well-known process of ‘pejoização'”.

In the case of payroll, a 10 percentage point reduction was proposed in the employer’s contribution to Social Security on the portion of wages that exceeds the ceiling of the contribution wage.

The package of changes includes the reduction of corporate income tax to international levels, accompanied on the other hand by taxation not only on the distribution of interest and dividends to shareholders, but on capital income as a whole.

This includes earnings from rent and financial investments in general, such as the Stock Exchange, investment funds, CDBs, government bonds, including dividends sent to other countries, earnings from the institution of quota eaters and closed funds.

By suggestion, capital income of up to R$ 500 per month would be exempt for individuals. Above this amount, the charge would be made in two stages.

There would be a withholding tax of 15% and collection via the individual’s annual Income Tax declaration. In this second stage, the charge would be staggered at rates from zero to 22.5%, offsetting tax at source when applicable. In this annual charge, the sum of labor income and capital income exceeding R$ 500 per month would be considered.

The progressiveness of the rates would serve to differentiate the charge on large and small investors or shareholders.

Appy has always defended that a good redesign of the tax collection structure should have a less socially unfair Income Tax, capable of contributing to the reduction of inequality. But, at the same time, it would be necessary to ease the payroll and taxation in the company, which would make room for the growth of the economy as a whole.