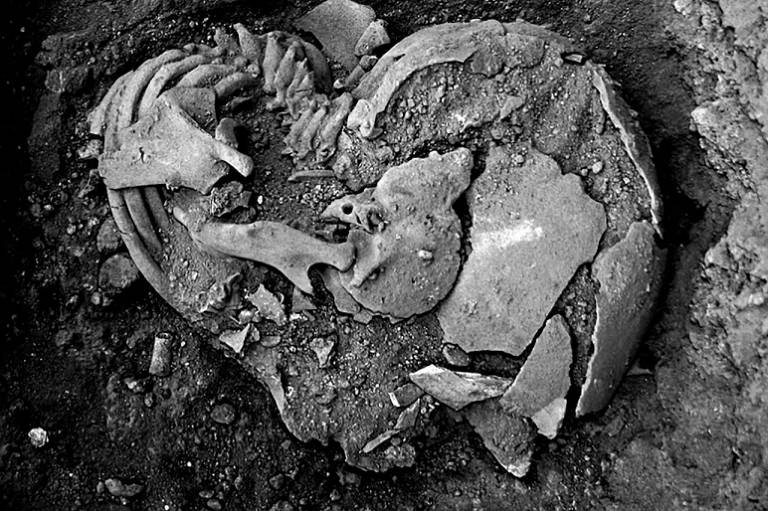 Case of syphilis from 10,000 years ago is discovered in the interior of MG

The child was four years old when she died, but she was so small that she could have been mistaken for a one-and-a-half-year-old baby. Buried nearly ten millennia ago in a cave in the interior of Minas Gerais, her skeleton had deformities most likely caused by a congenital case of syphilis.

This is the oldest record of the disease on the American continent, according to the quintet of researchers from USP who analyzed the bones of the little victim. They have just published the results of the examination of the remains in the specialized journal International Journal of Osteoarchaeology.

The researchers estimate that the burial of the child in the rocky shelter known as Lapa do Santo took place at least 9,500 years ago, while the oldest case of syphilis detected by previous work (in an adult individual) is 5,300 years old.

The clues currently available indicate that syphilis is the main exception in the process of epidemiological exchanges between the Americas and the Old World, which began with the arrival of Christopher Columbus in the Caribbean in 1492. brought by European invaders and enslaved Africans —measles, smallpox and malaria in particular— decimated the indigenous population, which had no natural defenses against such diseases.

The first outbreaks of syphilis in Europe, however, also coincided with the time of Columbus’ voyages. For centuries, the sexually transmitted disease caused by the bacteria Treponema pallidum pallidum, had a devastating effect on Old World populations, causing lesions on the genitals and, later, on relapses of infected individuals, on the skin and nervous system, with effects such as strokes and paralysis. In addition, the disease can be transmitted from the pregnant mother to the fetus.

Archaeological data have shown that both syphilis and other diseases caused by bacteria of the same genus, known collectively as treponematoses, already affected indigenous peoples thousands of years before the first European outbreaks, recorded at the turn of the 15th to the 16th century. The most accepted hypothesis today is that syphilis would have been taken by the first European crews to their continent of origin.

“There are no longer any doubts about the very ancient presence of these diseases in the Americas”, ponders bioanthropologist Rodrigo Elias de Oliveira, first author of the study. “The question is whether it emerged on the American continent or whether the disease arrived here along with the initial waves of population, around 15,000 years ago. In the case of this second possibility, it could have emerged in Asia or Africa itself .”

Although related diseases probably also circulated in the pre-Columbian indigenous population, there is no evidence that they can be transmitted congenitally. This fact, added to the specific lesions on the skeleton of the child from Lapa do Santo, many of which began during pregnancy, indicate that the most likely hypothesis is that he was a victim of syphilis.

The congenital effects of the disease can be detected in various malformations of the skull, teeth and limbs. One of the most visible is the so-called “saddle nose”, which, as the name suggests, has a “sunken” appearance. “The disease affects the cartilage that would normally join the nasal bones to those of the forehead, giving the upper part of the nose a concave shape”, explains Oliveira.

In addition, the child likely had difficulty walking, judging by injuries to his left femur. And because the bones in his skull fused together too early, when more room was still needed for the developing brain, this process must have increased pressure within the cranial structure, which would increase the risk of problems such as a stroke (stroke). . It would be an explanation for the early death of the victim.

According to Oliveira, although congenital syphilis is best known for cases arising from sexual transmission by the child’s mother, transmission through contact, through wounds on the skin, cannot be ruled out either.