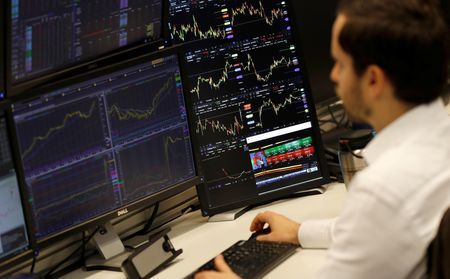 PARIS (Reuters) – European stock markets ended sharply lower on Thursday and Wall Street was also trading in the red mid-session in reaction to the acceleration of monetary tightening by central banks, led by the US Federal Reserve and Swiss National Bank, which which sent bond yields soaring and equities under pressure as investors increasingly feared the economy would plunge into recession.

After the US Federal Reserve (Fed) rate hike of 75 basis points on Wednesday evening, the Swiss National Bank (SNB) surprised Thursday by raising its key rate for the first time in 15 years by 50 basis points.

The two central banks have also clearly indicated that other increases could occur in the coming months to curb inflation that has reached a record level.

While the SNB maintained its growth forecast for the Swiss economy for this year, at around 2.5%, the Fed said it anticipated an economic slowdown and rising unemployment in the United States in the coming months.

The Bank of England (BoE), for its part, announced on Thursday a quarter-point increase in its key rate, its fifth increase since last December, assuring that it would act “with force” if necessary in the face of inflation risks.

In the euro zone, money markets are now forecasting a 190 basis point rise in European Central Bank (ECB) rates by December, compared to a forecast of 140 points on Wednesday.

The latest tightening of central banks fueled nervousness and volatility in the markets, with the CBOE index in the United States moving well above 30 points, as did its European equivalent, which ended with a gain of 8 % at 32.5 points.

“The Fed is now painting a central scenario that is much closer to a hard landing,” said Deutsche Bank strategist Jim Reid in a note.

Wells Fargo analysts, for their part, have estimated that the probability of a recession in the United States is now over 50%.

In Europe, all major sectors ended in the red, with retail suffering one of the biggest contractions in the wake of the warning from ASOS. The British online fashion group, which plunged 32.4%, reported a significant increase in item returns from customers amid strong inflationary pressures.

Its competitors Zalando and Boohoo fell 12.4% and 11.2% respectively.

The basic resources (-3%) and energy (-3.4%) compartments also suffered amid supply fears, with Engie (-7.2%) saying on Wednesday it had seen a decline gas deliveries after the new restrictions on exports decided by Russia.

On the upside, Euronext took 1.5%, thanks to JPMorgan’s recommendation increase on the value to “overweight”.

Tesla fell 6.4% after the group announced a further increase in the price of its cars due to inflation.

Jobless claims in the United States fell less than expected last week, to 229,000, while business conditions in the Philadelphia area deteriorated again in June, with a “Philly Fed” index falling to -3.3.

The Swiss National Bank’s unexpected rate hike supported bond yields in Europe, with some analysts believing that the ECB will now be even more aggressive in its monetary policy.

The yield on the ten-year French OAT took four points to 2.258%, while its Italian equivalent of the same maturity rose above 4% in the session before falling to 3.853% at the close.

In the United States, the yield of ten-year Treasuries, which rose during the session to 3.438%, and that of two years to 3.355% fell respectively by 7.5 points and 10.6 points at the close of trading in Europe.

The index measuring the fluctuations of the greenback against a basket of reference currencies, which had reached a 20-year high on Wednesday before the Fed’s announcements, fell on Thursday by 0.96%, the rise of 75 basis points in rates in the United States not constituting a surprise.

Oil prices, which fell in session to a two-week low, are volatile, with investors torn between fears of a recession in the wake of the sharp rise in interest rates and supply tensions.

Facebook
Twitter
Pinterest
WhatsApp
Previous articleSurvivor-Vrisida: Martikas had told me I love you, I did not
Next articleOpinion: What happened in the Brazilian economy? A reply to Samuel Pessôa

NASA communication with Capstone has been restored