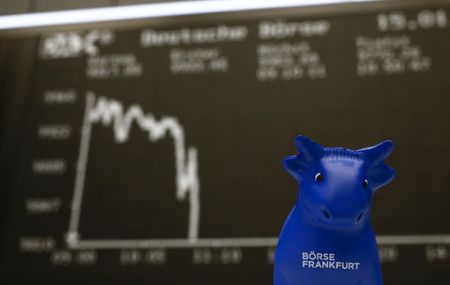 PARIS (Reuters) – European stocks ended in disarray on Monday, while Wall Street was trading in the red at midday after a volatile session in equity markets linked to the approach of the publication. decisions of several major central banks this week.

The London Stock Exchange remained closed on the occasion of the funeral of Queen Elizabeth II.

The stock markets in Europe, which evolved in the red for a good part of the session, turned around a little more than two hours after the opening of the American markets in the wake of the rebound of the three main Wall Street indices, before end up in disarray.

They had recorded in Europe Friday their worst performance in three months, while on Wall Street the indices had accused their weakest week since that ending on August 26.

“Markets will be looking for direction until the Fed meeting, there won’t be much trading in equities until then,” said Christopher Grisanti, equity strategist at MAI Capital Management, referring to the big two-day meeting of the American central bank which begins on Tuesday.

In the United States, money markets are expecting a rise of at least 75 points in Fed rates on Wednesday and the probability of a 100-point hike is estimated at 21% according to CME Group’s Fedwatch barometer.

In the euro zone, where rates were raised this month also by 75 points, the president of the European Central Bank (ECB), Christine Lagarde, is due to speak on Wednesday at an event organized by the Frankfurter Gesellschaft für Handel , Industry and Wissenschaft.

Monetary policy releases from the Bank of Japan (BoJ), the Swiss National Bank (SNB) and the Bank of England (BoE) are expected on Thursday. Apart from Japan, which should opt for the status quo, monetary tightening is also expected in these countries.

On the pan-European Stoxx 600, the automotive sector (+0.74%) was among the biggest risers, while on the other side of the spectrum, real estate (-1.36%) showed the steeper fall, in view of a further rise in the cost of credit.

In business news, TF1 and M6 fell by 2.33% and 3.43% respectively after the abandonment of their merger project.

Volkswagen, which aims for Porsche a valuation of 75 billion euros as part of the IPO of its subsidiary, gained 1.06%.

Microsoft lost 1.29%, while Apple and Tesla, up 0.96% and 1.15% respectively, benefited from bargain shopping despite the imminence of another interest rate hike.

Take-Two Interactive Software fell 0.48% as Bloomberg reported on Sunday that footage of its “Grand Theft Auto VI” game was leaked online by hackers.

On foreign exchange, the dollar was stable (+0.07%) against other major currencies, before the Fed’s decision. The note benefits from its status as a safe haven asset and from expectations of a possible rise in the cost of credit, which is greater in the United States than elsewhere.

In the bond market, yields hit new highs on Monday ahead of central bank decisions.

ECB economist Philip Lane said over the weekend that the rise in interest rates could continue into next year, while Luis de Guindos, the institution’s vice-president, said said on Monday that the next rate hikes would depend on macroeconomic data.

Oil prices are also volatile, with investors torn between the strength of the dollar, the prospect of lower demand given the expected rise in interest rates in the United States and concerns over supply.

Market: The ECB will raise rates as much as necessary, says Villeroy