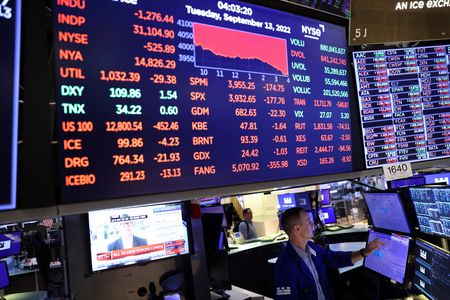 Market: Equities in the red ahead of central bank decisions

PARIS (Reuters) – Wall Street is expected to open lower again on Monday and European stock markets are in the red mid-session, caution prevailing at the start of a week marked by decisions expected from several major centrals, including those of the US Federal Reserve (Fed).

The pan-European FTSEurofirst 300 index fell by 0.64% and the EuroStoxx 50 for the euro zone by 0.88%. The Stoxx 600, which hit a two-month low in session, contracted another 0.69% after the worst weekly performance in three months recorded by European stock markets on Friday.

Monday’s drop in Europe is, among other things, led by the new technologies compartment (-1.05%), sensitive to the evolution of interest rates, as the Fed begins a two-day policy meeting on Tuesday. monetary.

A further 75 basis point rate hike in the United States is widely anticipated and the probability of a 100 basis point hike is estimated at 20%, shows the CME Group’s FedWatch barometer.

In the euro zone, the President of the European Central Bank (ECB), Christine Lagarde, is due to speak on Wednesday at an event organized by the Frankfurter Gesellschaft für Handel, Industrie und Wissenschaft.

Monetary policy releases from the Bank of Japan (BoJ), the Swiss National Bank (SNB) and the Bank of England (BoE) will follow on Thursday.

The new tightening expected from these central banks, with the exception of the BoJ, is fueling investor nervousness amid deteriorating economic conditions, with the US volatility Vix index nearing a peak of two months (27.83 points), while its European equivalent advances by 3.24% to 27.28 points.

The German Central Bank also indicated on Monday that the country’s economy could suffer all winter with possible gas rationing.

On the pan-European Stoxx 600, the main sectors are in the red and, in addition to the technology compartment, that of energy (-1.56%) posted one of the largest drops in the wake of the decline in oil, penalized by the strength of the dollar and fears over global demand.

In business news, TF1 and M6 respectively fell by 2.41% and 2.36% after the abandonment of their merger project.

Volkswagen, which aims for Porsche a valuation of 75 billion euros as part of the IPO of its subsidiary, gains 0.71%.

Deutsche Bank loses 0.63% after the announcement by the German bank of a payment of 60 million euros to the tax authorities, alongside other groups, in the context of the “cum-ex” affair .

Bond yields in Europe continue to rise, supported by new statements from ECB officials, including Philip Lane, who said over the weekend that the rise in interest rates could continue to next year. Luis de Guindos, the institution’s vice-president, however, said on Monday that the next rate hikes would depend on macroeconomic data.

On the American market, the yield of ten-year Treasuries gained nearly six points to 3.5061% and that of two years seven points to 3.9294%.

The dollar advanced 0.1% against other major currencies, very close to its 20-year peak reached on September 7.

Oil prices are falling, as the strength of the dollar and fears over demand take precedence over an easing of health restrictions in China.

Facebook
Twitter
Pinterest
WhatsApp
Previous article
Skylakakis on SKAI 100.3: The Tsipras program from TIF would drive every serious investor out of the country
Next article
Tf1: In sharp decline after the abandonment of the merger with M6