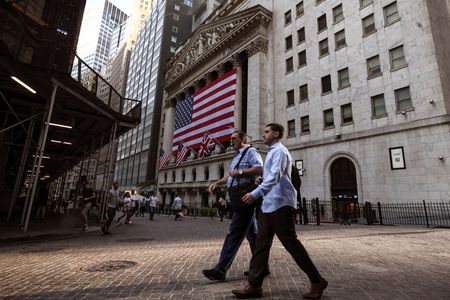 Wall Street: Wall Street continues to decline in the aftermath of the Fed

PARIS (Reuters) – The New York Stock Exchange opened lower on Thursday, still hurt by the prospect of seeing the rapid rise in interest rates orchestrated by the Federal Reserve penalize economic growth, employment and the profits of listed companies .

They have all already fallen more than 1.7% on Wednesday after the Fed announced another three-quarter point rate hike – which most likely won’t be the last – and statements from its chairman, Jerome Powell, on the inevitable impact of monetary tightening on growth and employment.

Several large banks, including Goldman Sachs, have raised their estimates for rising US rates and those of Societe Generale are now expecting a slight recession in the United States in early 2024.

The S&P 500 is trading less than 4% above its low for the year, hit in June, after the decline in recent weeks, favored among other things by profit warnings from FedEx and Ford.

And industrial values ​​remain misguided: among the largest declines in the Dow Jones at the start of the session, Boeing lost 1.29% and Honeywell 0.73%.

On the rise, Salesforce gained 2.36% after saying it expects an average annual growth of 17% in its turnover by 2026.

Facebook
Twitter
Pinterest
WhatsApp
Previous articleMarket: RTL expects preliminary offers for its share in M6 on Friday, according to a source
Next articleItaly: What is the stance of the far-right alliance towards Vladimir Putin?