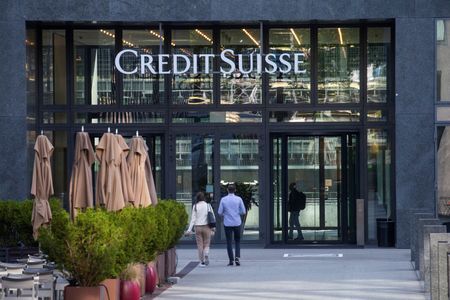 Credit Suisse: Sharp drop in CDS, the action goes up

LONDON (Reuters) – The cost to hedge against a risk of Credit Suisse default fell sharply on Tuesday from the previous day’s close, following the Swiss bank’s stock rally amid easing concerns against him.

The price of five-year CDS (credit default swaps) thus stands at 308.32 basis points, down 13 points, compared to Monday’s closing price which was 321.10 points, according to S&P Global Market. Intelligence.

Credit Suisse’s CDS jumped to 355 points on Monday, up 57 points since the start of the year, again according to data from S&P Global.

The action Credit Suisse, which hit a historic low last month due to doubts about the group’s solidity, recovered on Tuesday to 4.14 Swiss francs, up 5.15%. The title nevertheless still shows a fall of more than 50% since the beginning of the year.

The Swiss bank, facing multiple scandals and financial losses, is finalizing a restructuring plan to be unveiled on October 27.