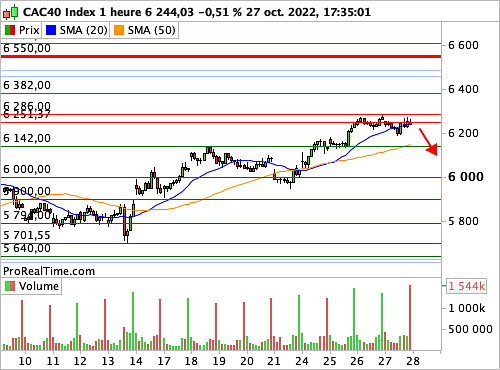 (News Bulletin 247) – Under a flood of contrasting quarterly copies, and after a new Board of Governors of the European Central Bank, the CAC 40 experienced another session of high volatility on Thursday. The barometer index of the Parisian financial and stock market will finally have managed to significantly limit its losses at the close (-0.51% to 6,244 points). Unsurprisingly, the ECB raised its key rates by 75 basis points, bringing them to 2.00%.

PIMCO strategists expect “a further 50 basis point hike in policy rates in December and a transition to 25 basis point increases next year as the up cycle pivots from the normalization of policy to policy tightening.”

“The ECB did not provide much guidance on quantitative tightening (QT) [hier] but hinted at decisions at its next meeting in December.

In terms of statistics, the very first estimates of Q3 GDP in the United States rose to 2.6% quarter on quarter, returning to growth beyond expectations. Good news is bad news? The opening on Wall Street will be instructive.

On the values ​​side, Casino (+15.72%) and Carrefour (+2.90%) pulled up the Parisian rating, after figures deemed reassuring. The owner of Monoprix has also announced that he plans to sell part of his stake in the Brazilian group Assai for 500 million euros, to continue his debt reduction. TotalEnergies gained 2.4% as the group raked in profits of $6.6 billion in the third quarter. Adjusted net income was $9.9 billion, while analysts had expected 9.6 billion euros, according to a consensus quoted by Royal Bank of Canada. STMicroelectronics ended down 7% despite posting strong quarterly results.

On the other side of the Atlantic, the main equity indices once again ended in scattered order, the Dow Jones managing to grab 0.61% on Thursday to 32,033 points, and the Nasdaq Composite, with strong technological coloring, contracting 1.63% to 10,792 points, weighed down by MetaPlatforms (-25%), whose quarterly copy was a big disappointment. The S&P 500, the benchmark barometer of risk appetite in the eyes of fund managers, lost 0.61% to 3,807 points.

A point on the other risky asset classes: around 08:00 this morning on the foreign exchange market, the single currency was trading at a level close to $0.9970. The barrel of WTI, one of the barometers of risk appetite in the financial markets, was trading around $89.40.

To follow as a priority on the statistical agenda this Friday, preliminary data for German GDP in Q3 at 10:00 a.m., and across the Atlantic, the PCE consumer price index, household spending and income at 2:30 p.m., home sales and the Consumer Confidence Index (U-Mich, revised data, 4:00 p.m.).

This bearish scenario is valid as long as the CAC 40 index is trading below the resistance at 6286.00 points.

Facebook
Twitter
Pinterest
WhatsApp
Previous article
DW: A message of cooperation in difficult times from the Mitsotakis – Soltz meeting
Next article
Mexico is a candidate for the 2036 Olympic Games

STOCK MARKET: Credit Suisse at its lowest, sharp drop in its subscription right