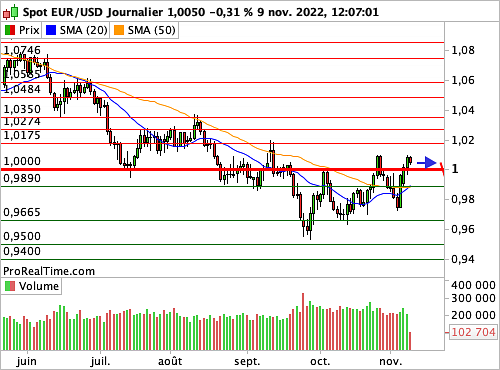 EUR/USD: Winding around a parity level

(News Bulletin 247) – The Euro Dollar remained close to a level of perfect parity as the final results of the elections in midterms (mid-term) in the United States. First lessons: the Republican tidal wave envisaged for a time in the House of Representatives will not take place. In the Senate, the results, at this stage, show a very balanced balance of power.

Other driver very important for the Euro/Dollar currency pair, the consumer price index will be released tomorrow (2:30 p.m. Paris time). On an annualized basis, and for the broadest basket of products (food and energy included), prices are expected to rise by 7.9%, compared to 8.2% last month. “U.S. inflation data released this week will come under scrutiny, after the latest jobs data confirmed the continuing labor shortage. policy of extreme tightening”, note the strategists of the BlackRock Investment Institute, in the conclusions of their forum on the “new market regime”.

The energy of pullback was maintained at the start of the week by two publications which came out significantly above expectations: German industrial production (+0.6% in September on a monthly basis) and the Sentix index of investor confidence in the Euro Zone which at – 30.9, although in negative territory, is making a nice comeback. The firm specializing in behavioral finance provided the following reading keys: “The global index rose by 7.4 points to -30.9, which is still not a signal of a trend reversal. But the rise in Situation and anticipation values ​​show how sensitive investors are reacting in their economic expectations to signals from the energy market, because this is the cause of the promising changes.October showed higher temperatures than usual and that means gas storage facilities in Germany, for example, are full to the brim, more than expected for November, spot market gas prices have crashed and fears of a catastrophic gas shortage are fading.”

At midday on the foreign exchange market, the Euro was trading against $1.0050 about.

In significant volatility, the currency pair has successively drawn two marubozus in daily data, of equal magnitude, and of comparable level, around the perfect parity, which continues to constitute a pivot level in the immediate future. The current main issue is positioning relative to the 50-day moving average (in orange). Knowing that the last green body dates from the “session” of 10/26, and that this trendline is in the phase of reaffirmation of its negative slope, we will speak of false exit and reintegration. We are now witnessing a second pullback on the perfect parity (1 Dollar per Euro). The bearish message is therefore reinforced.

We will keep this neutral opinion as long as the Euro Dollar (EURUSD) parity prices are positioned between the support at 0.9890 USD and the resistance at 1.0175 USD.

Facebook
Twitter
Pinterest
WhatsApp
Previous article
Tsipras – Strike: A resounding response to the Mitsotakis regime that plunges society into despair
Next article
Opinion – Black Guide: Why have travel companies and influencers not yet incorporated anti-racism?