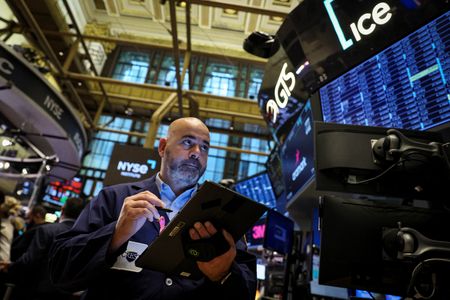 PARIS (Reuters) – The New York Stock Exchange had its best session on Thursday in more than two and a half years after the announcement of a more marked than expected slowdown in inflation in the United States, which could lead the Reserve federal government to moderate the rise in interest rates, to the great relief of investors.

We have to go back to the spring of 2020, a period marked by significant market fluctuations at the start of the COVID-19 pandemic, to find such spectacular performances.

The CBOE volatility index, a closely followed barometer of investor nervousness, fell nearly ten points to 23.53, the lowest since mid-September.

The consumer price index (CPI) rose 0.4% last month and year on year its rise fell to 7.7% from 8.2% in September as economists polled by Reuters forecast on average an increase of 0.6% month-on-month and 8.0% year-on-year.

US inflation is thus back below 8% for the first time since February.

These figures led investors to revise their expectations for a Fed rate hike: the estimated probability of a hike limited to 50 basis points next month jumped to more than 70%, while the assumption of a an increase of 75 points remained privileged at the start of the day.

“Inflation remains too high but there is evidence that the Fed has turned a corner in its battle and that the pace of future interest rate hikes will start to slow,” said Christopher Rupkey, chief economics officer of FWDBONDS at New York.

“The market is buoyed by the feeling that the moderation in inflation, which it has been waiting for so long, is finally starting to show itself.”

On the bond market, this reassessment of the outlook for higher rates resulted in a fall in Treasury bond yields: at the end of the session, that of ten-year “Treasuries” fell by 32 basis points to 3.8237%. and the two-year by nearly 30 points to 4.3321%.

At the same time, the dollar depreciated by 2.53% against a basket of reference currencies, allowing the euro to rise to 1.0206, its highest since August 15.

On the equities side, all the major S&P sector indices ended the day in the green, but the most spectacular performances benefited the compartments most sensitive to changes in rates: that of non-constrained consumer products gained 7.7%. , that of high technologies 8.33%, that of real estate 7.75%.

The most spectacular rise of the day is for the manufacturer of electric vehicles Rivian, whose share price soared by 17.42% after the announcement of a less heavy loss than expected, an increase in its pre- orders and the confirmation of its annual forecasts.

(Written by Marc Angrand, with Lucia Mutikani in Washington)

Facebook
Twitter
Pinterest
WhatsApp
Previous article
How to differentiate flu from Covid? How to protect yourself from BQ.1? Doubts about the rise in Covid cases
Next article
New adaptation of ‘Nothing New on the Front’ recalls the disgust that humanity awakens