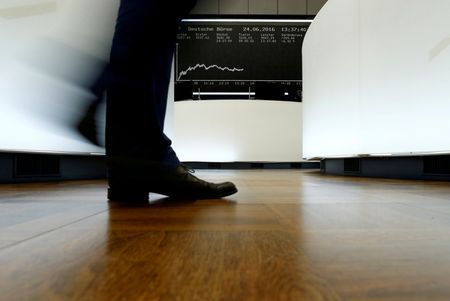 Market: Europe, excluding London, ends up in the green after US inflation

PARIS (Reuters) – European stock markets, with the exception of London, ended in the green on Tuesday and Wall Street was also up sharply at the end of the morning in New York, new data on producer prices in the United States. United States having confirmed the slowdown in inflation and the hope of a lull in the rapid rise in interest rates.

Less than a week after the publication of monthly consumer prices (CPI) in the United States which had shown a surprise slowdown in inflation, the monthly data for producer prices (PPI) in turn posted a unexpected deceleration.

That could prompt the Fed to moderate the pace of raising interest rates as markets now price with a 91% probability of a limited 50 basis point rise in the cost of credit in December after four straight 75-point hikes. points.

On the geopolitical level, the hope of a relaxation in Sino-American relations on the sidelines of the G20 summit which opened in Bali, Indonesia, also contributed to the good performance of the equity markets. The leaders of the group of the twenty most industrialized countries are struggling, on the other hand, to agree on a draft final communiqué stipulating that most of the member countries condemn the invasion of Ukraine by Russia.

In Europe, the new technologies compartment (+1.37%), which is very sensitive to changes in interest rates, ended up at the top of the Stoxx, while telecoms (-1.06%), weighed down in particular by Vodafone, showed the largest decline.

The British telecommunications giant fell 7.94% after lowering its forecast for free cash flow and full-year profit amid rising costs.

Also in London, Centrica, the owner of British Gas, advanced 3.37% thanks to the launch of a share buyback program.

In Paris, Orpea fell 2.33% in response to searches carried out on Tuesday in several establishments of the group, which relegated to the background the presentation of its “transformation plan”.

Teleperformance, whose stock tumbled last week on suspicion of labor violations in Colombia, rebounded 10.01%, buoyed by a buy recommendation from Citigroup.

Renault gained 1.55% after the reassuring words of its president on the discussions with its Japanese partner Nissan.

The giants of new technologies like Apple, Amazon and Alphabet grant themselves from 2.32% to 4.54% with the ebb of bond yields.

Home Depot gained 2.33%, the world’s number one DIY store having reported on Tuesday a growth in quarterly sales on a like-for-like basis above expectations.

Manufacturing activity in the New York area has rebounded stronger than expected since the start of the month, with an Empire State index up to 4.5, the highest level since July, after -9.1 in October, shows Tuesday the monthly survey of the regional branch of the Federal Reserve.

Investor sentiment in Germany has improved further since the beginning of November, with an index at -36.7 after -59.2 in October, buoyed by hopes of an imminent drop in inflation, says the survey of the ZEW Institute for Economic Studies.

Economic growth in the eurozone slowed to 0.2% in the third quarter, according to the second GDP estimate released by Eurostat.

The consumer price index in France, harmonized according to European standards, was confirmed at +7.1% over one year in October, according to INSEE.

The dollar, which has bottomed in session since August, fell 0.28% against a basket of benchmark currencies, hurt by the return of risk appetite in response to signs of slowing inflation American.

The euro took advantage of this to rise to 1.0375 dollars (+0.48%). The single European currency hit a high since July 1 at $1.0407, supported by the recovery in investor sentiment in Germany and comments by François Villeroy de Galhau, the Governor of the Banque de France, who sees rates of the ECB continue to rise above 2%.

Bond yields are affected by US producer price figures: the US 10-year is trading at 3.8106%, down around five basis points, while its German equivalent is trading at 2.114 %, down about six points.

Oil prices are volatile, caught between the ebb of the dollar and fears over Chinese demand: at the time of the close of the stock markets in Europe, Brent gained 0.27% to 93.39 dollars a barrel and light crude American (West Texas Intermediate, WTI) 0.38% to 86.20 dollars a barrel.

Facebook
Twitter
Pinterest
WhatsApp
Previous article
Moldova: Power outages after Russian missile attacks on Ukrainian cities
Next article
Mitsotakis: The Greece of 2022 has turned the page and cannot be compared to the Greece of the crisis