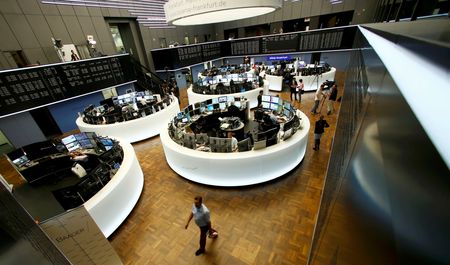 Market: Europe ends in the red with geopolitical tensions and mixed indicators

PARIS (Reuters) – European stocks ended lower on Wednesday and Wall Street was in chaos at midday in New York, as the equity market session was marked by renewed risk aversion after the outlook. considered disappointing by certain companies, mixed macroeconomic indicators and the risk of an extension of the conflict in Ukraine.

The explosion of a missile on Tuesday in a Polish village near the Ukrainian border has revived fears of an extension of the conflict in Ukraine even if Warsaw, NATO and the White House have made it known that there is no no signs of a deliberate attack on Poland at this time. Kyiv, however, evokes evidence of a “Russian trace” of the missile and calls for participation in the ongoing investigation, while the leaders of the G20 adopted a joint declaration at the end of their summit in which “most (… ) strongly condemn” the war in Ukraine.

In today’s macroeconomic data, UK inflation hit 11.1% in October, the highest since 1981, as the government is due to announce tax hikes and budget cuts on Thursday.

In the United States, industrial production posted a surprise contraction of 0.1% last month, but retail sales rose faster than expected in October, of 1.3%. This latest data could lead the US Federal Reserve (Fed) to judge that its interest rate hikes have not yet produced the expected effect, said Brian Jacobsen, strategist at Allspring Global Investments.

Among the main sectors of the S&P-500, the distribution (-0.79%) and the consumer discretionary compartment (-1.08%) show among the largest declines, in the wake of the warning of the distributor Target, which anticipated lower sales for the Christmas holiday quarter due to “dramatic changes” in consumer behavior. Target shares plunged 11.76%, Macy’s 8.58%, Best Buy 7.65% and Dollar Tree 2.25%.

Against the trend, the group of DIY stores Lowe’s Companies is up 4.75% after raising its annual profit forecast.

The semiconductor compartment (-3.66%) is for its part affected by the lowering of forecasts for 2023 from Micron Technology. Intel, Nvidia and Qualcomm are losing around 3% each.

On the other side of the spectrum, distribution (-3.36%), affected by Target, and automotive (-3.72%), penalized by Mercedes Benz (-6.2%), which, according to the The Bloomberg agency, sharply reduced the selling prices of its electric models in China, showed the largest declines.

In the other compartments, Air France-KLM fell 10.51% after the announcement of a convertible bond issue, while Alstom took 7.16% after its half-year results exceeded expectations.

The dollar fell 0.08% against a basket of benchmark currencies in a context of easing fears about Poland at the close of trading in Europe.

Short-term and long-term US bond yields move erratically following US retail sales figures. The two-year rose 1.3 basis points to 4.37%, while the ten-year yielded 6.7 points to 3.73%, investors being convinced that the Fed will continue to raise its interest rates at risk. to seriously affect the economy.

The European Central Bank (ECB) said on Wednesday that risks surrounding financial stability in the eurozone were growing.

Oil prices are falling, affected by the resumption of crude deliveries via the Druzhba pipeline linking Russia to several central European countries.