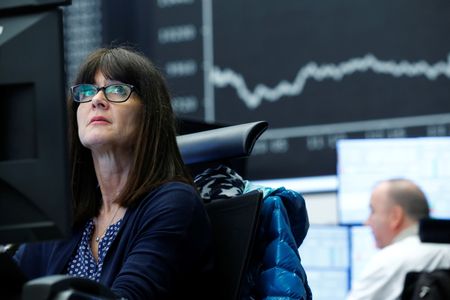 Market: Europe ends in the green with the rebound in commodities

Stocks have regained some of the ground lost in previous sessions on the back of bargain buying as concerns about the evolving COVID-19 outbreak in China are far from over.

But on the eve of the publication of the “minutes” of the November meeting of the Fed before those of the ECB on Thursday, investors seemed to be more interested in the evolution of the cost of credit, a lull being hoped for in its rise. .

San Francisco Federal Reserve Chair Mary Daly stressed that the U.S. central bank must be cautious to avoid a “painful slowdown”, while her Cleveland counterpart Loretta Mester spoke out in favor of a reduced increase in interest rates in December.

In the euro zone, a Reuters survey showed that the ECB is expected to raise its deposit rate next month by just 50 basis points in December to 2% after increases of 200 points in total since July.

Among the major compartments of the European listing, the renewed appetite for risk has mainly benefited stocks linked to energy (+4.7%) and basic resources (+2.69%), Saudi Arabia having denied plans to increase oil production.

The steelmaker Thyssenkrupp, on the other hand, dropped 4.33% after the reduction of the participation of the activist fund Cevian in its capital.

The energy compartment, which fell to a four-week low on Monday, rebounded 2.62%, leading the eleven main indices of the S&P-500.

In values, Best Buy soared 10.87% after saying Tuesday expect a smaller decline than initially expected in sales this year. Apple gained 0.48%, as Best Buy said it expected a shortage of iPhones in its stores for the Christmas holidays amid tensions in production in China in view of the health situation in the country.

Walgreens Boots Alliance, whose share price rose 2.62% after Cowen & Company’s recommendation was raised to “outperformance”, also contributed to the good performance of the indices, as did Dell (+3.06%) and American Eagle. Outfitters (+16.30%), which also published their financial accounts.

On the downside, the results and outlook of Zoom Video Communications (-6.51%) and Medtronic (-6.56%) are considered disappointing.

Global gross domestic product (GDP) growth is expected to slow to 2.2% in 2023 from 3.1% this year before accelerating to 2.7% in 2024, the Organization for Economic Co-operation and Development estimated ( OECD), revising its forecast for this year slightly downwards.

At foreign exchange, the dollar fell 0.34% against a basket of international currencies as fears about the health situation in China took a back seat on the eve of the Fed’s “minutes”.

The yield of ten-year US Treasuries fell five points to 3.77% and that of two years was unchanged at 4.52%, in low trading volumes while Wall Street will be closed Thursday for the Thanksgiving Day and the session cut short on Friday.

Saudi Arabia not only denied considering an OPEC+ production hike but also hinted that the organization and its allies could take further steps to balance the market, which is pulling oil prices: Brent gained 2.17% to $89.35 a barrel and US light crude (West Texas Intermediate, WTI) 2.05% to $81.68 a barrel.

Facebook
Twitter
Pinterest
WhatsApp
Previous article
Commission: “Green light” for the disbursement of the last installment of 748 million euros for the relief of the Greek debt
Next article
#Hashtag: Brazil is already winner of the World Cup of memes