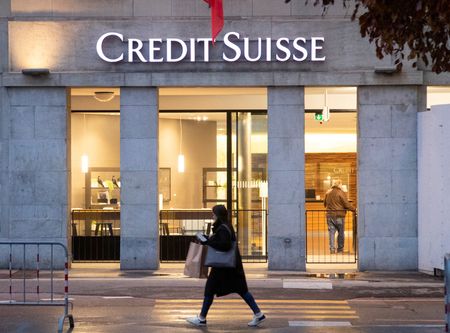 ZURICH (Reuters) – Credit Suisse is seeking to bolster cost cuts announced a few weeks ago as large client outflows and a slowdown in activity weighed on its revenue outlook, three people familiar with the talks said.

The Swiss bank could cut more positions than previously announced, including in its flagship wealth management business, the sources said.

Two said Credit Suisse was cutting its Private Banking unit in Hong Kong by around 5%, primarily targeting mid- and junior-level bankers, in bigger moves than announced so far. now.

“As previously reported, the bank is already making progress in reducing costs, following a clear execution roadmap,” Credit Suisse told Reuters. The group did not wish to comment on possible job cuts in Private Banking in Hong Kong.

In October, Credit Suisse said it wanted to reduce its cost base by around 2.5 billion Swiss francs (2.54 billion euros) to around 14.5 billion in 2025.

The bank had specified that it would cut 2,700 jobs from the fourth quarter and would split its investment banking activities to favor wealth management, deemed less risky.

Capital outflows accelerated at the end of the year: they represented approximately 6% of assets under management over the six weeks preceding November 11, causing the liquidity ratio of some of its entities to fall below regulatory requirements.

The president of the Swiss bank, Axel Lehmann, however indicated on Thursday that the exits were partially reversed and that very few customers left definitively.