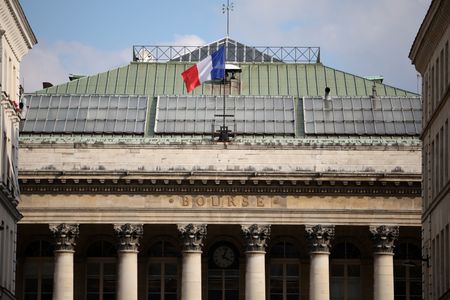 PARIS (Reuters) – European stock markets ended in disarray on Thursday as Wall Street traded in the red on profit-taking after taking full advantage on Wednesday of the increasingly clear prospect that the U.S. central bank would slow the pace of its monetary tightening.

The latter recorded in session its highest level since the beginning of June in reaction to statements by the President of the Fed, Jerome Powell, on the possibility that the institution slows down the rise in its rates at the next meeting, on December 14.

Supporting the prospect that the Fed will limit itself to a 50 basis point hike in less than two weeks, the progression of the “core PCE” price index slowed to 0.2% in October, against +0.5% a month earlier, and at 5% over one year, after +5.2%.

However, risk appetite waned with the announcement of a contraction in US manufacturing activity, the first in two and a half years.

Wall Street, which clearly benefited Wednesday from the accommodating speech of Jerome Powell, fell at the time of the closing in Europe: the Dow Jones lost 0.94%, the Standard & Poor’s 0.31% and the Nasdaq Composite 0.15%.

On the stock market, the Stoxx technology index posted the largest increase of the day, at 2.85%. Capgemini took 4.44% and Dassault Systèmes 4.52%.

The significant decline in government bond yields is unfavorable to banking stocks, whose European index lost 1.02%.

The dollar fell to its lowest level since mid-August against the other major currencies (-1.04%) as the scenario of Fed moderation in terms of rates became clearer, which enabled the euro, among other things, to back up to 1.0494.

Oil prices are on the rise with the easing of health restrictions in two Chinese metropolises: Guangzhou and Chongqing.

Apple: Earnings below expectations for Apple, a first since 2016

Market: Alphabet misses the consensus, advertising revenues at half mast