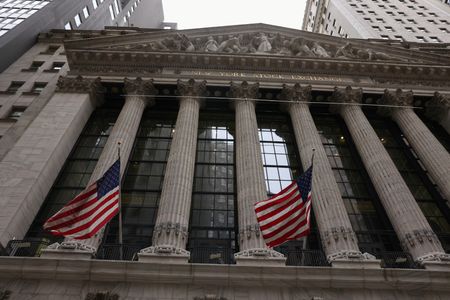 by Ankika Biswas and Noel Randewich

NEW YORK (Reuters) – Wall Street ended almost stable on Thursday, with the exception of the Dow Jones weighed down by the fall in Salesforce shares, while a series of indicators could confirm in the eyes of the participants the scenario of an easing of the Fed’s monetary policy.

The Dow Jones ended down 0.56% at 34,396.53 points, Salesforce losing 8.3% after the announcement of the departure in January of one of the software maker’s managing directors.

The New York Stock Exchange closed sharply higher on Wednesday, as markets welcomed comments from Federal Reserve Chairman Jerome Powell, who hinted that the pace of rate hikes could slow.

The publication on Thursday of the monthly ISM survey announcing a contraction in manufacturing activity in the United States in November, the first since May 2020, when the cost of credit weighed on demand for goods, confirmed that the Fed’s rate hikes were having an effect.

The PCE price index, excluding food and energy products, came out up 0.2% in October, after rising 0.5% in September.

“On a normal day, this set of indicators this morning would be quite supportive for risk taking, but after yesterday’s rally, I think it’s not quite good enough for another bullish session,” commented Ross Mayfield, analyst at Baird.

The markets are now awaiting the publication on Friday of the monthly employment report to decipher the effects of the Fed’s policy on the labor market.

Facebook
Twitter
Pinterest
WhatsApp
Previous article
Gkay is accused of destroying and not paying rent for a mansion in São Paulo
Next article
Panel SA: For Bolsonaro advisors, there is too much talk and lack of attitude in the transition