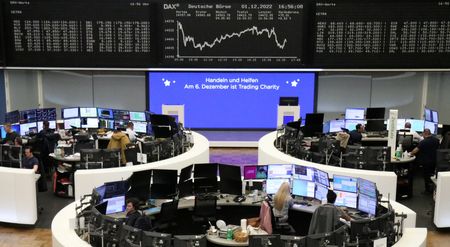 PARIS (Reuters) – The main European stock markets are expected to open slightly lower on Friday and variations should remain limited until the publication of the monthly employment report in the United States.

The European Stoxx 600 index has posted an increase of 0.73% since the start of the week and the Paris market of 0.62% thanks to the outlook, confirmed by the President of the Fed himself and by economic statistics, that the US central bank slows down the pace of its rate hikes on December 14.

The markets are now awaiting the monthly report from the Labor Department, but for Michael Hewson at CMC Markets, the indicator should not have the same importance as usual.

“We already know we’ll have a 50 basis point rate hike in just under two weeks. It’s more about what comes next,” he wrote in a note.

According to the Reuters consensus, job creations should have slowed to 200,000 in October against 261,000 a month earlier and wage increases should return to 4.6% over one year, after +4.7%.

Wall Street ended almost stable on Thursday, with the exception of the Dow Jones weighed down by the fall in Salesforce shares, while a series of indicators could fuel the scenario of an easing of monetary policy in the eyes of the participants. from the Fed.

The Dow Jones fell 0.56% to 34,396.53 points, the software publisher Salesforce losing 8.3% after the announcement of the departure in January of one of its general managers.

The publication of the monthly ISM survey announcing a contraction in manufacturing activity in the United States in November, the first since May 2020, confirmed that the Fed’s rate hikes were having their effect.

Supporting the prospect that the central bank will limit itself to a 50 basis point hike in less than two weeks, the rise in the “core PCE” price index slowed to 0.2% in October, against +0.5 % a month earlier, and at 5% over one year, after +5.2%.

Futures contracts are giving Wall Street an opening slightly lower for the moment.

The Nikkei in Tokyo ended the session down 1.59%, a two-week low, as the yen rose against the dollar.

In China, lingering concerns about the pace of the easing of health restrictions and the slowdown in the real estate sector have prevailed. The CSI 300 index lost 0.61% and the Shanghai SSE Composite 0.29%.

Yields on US Treasuries are steady at 3.528% for the 10-year, which fell more than 17 basis points on Thursday to hit a more than two-month low.

Its German equivalent gives up a little ground in the first exchanges, at 1.806%.

The dollar is at equilibrium against a basket of reference currencies (-0.11%), with traders avoiding taking positions ahead of employment statistics. The euro is moving around 1.053.

Oil prices are moving without much change pending the OPEC+ meeting on Sunday.

Market: Europe ends in the red with the return of rate uncertainties

Cac 40: Tensions between China and the United States halt the rise of the CAC 40