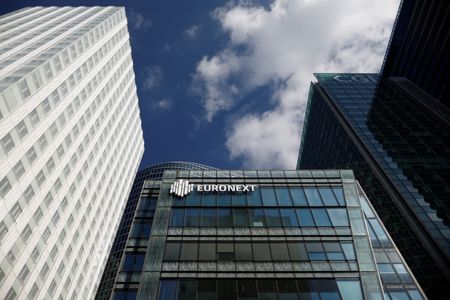 PARIS (Reuters) – European stocks ended lower on Wednesday after a volatile session while Wall Street also fell in late morning in New York, investors continuing to show caution after the pessimistic forecasts of several major American banks on the evolution of the United States economy.

China’s announcement of ten new measures to ease health restrictions after unprecedented protests against its “zero COVID” policy was not enough to restore appetite for risky assets.

A week before the monetary policy meeting of the American Federal Reserve (Fed) and that of the European Central Bank (ECB), fears about rates and the evolution of the economy dominated the exchanges.

Especially since the Bank of Canada surprised on Wednesday by raising its rates by 50 basis points to 4.25%, the highest level in nearly 15 years. But she hinted that the cycle of monetary tightening in Canada was soon coming to an end.

In terms of economic forecasts, the leaders of Goldman Sachs, JPMorgan Chase and Bank of America warned on Tuesday that inflation would weigh on consumers’ purchasing power next year and that a recession was likely in the United States, which which continued to fuel caution in the financial markets.

The CBOE index measuring volatility rose in session in the United States to a two-week high, at 23 points, and its European equivalent ended with a gain of 5.85% to 22.02 points.

Among the major sectors of the European dimension, the health compartment stood out with an increase of 0.7% thanks in particular to Sanofi (+6.10%) and GSK (+7.53%) which benefited from a court decision on Zantac, a treatment for stomach acidity accused of being carcinogenic.

Values ​​Tesla, still affected by fears of a drop in production at its Shanghai factory, fell for the third session in a row, by 3.90%.

Apple dropped 1.38%, Morgan Stanley having reduced its target for iPhone shipments in December due to the setbacks in China of Foxconn, the group’s subcontractor at the apple.

Economic growth in the euro zone in the third quarter was however stronger than previously announced, by 0.3% compared to the second quarter and 2.3% year on year, Eurostat data show.

In Germany, industrial production contracted in October, by 0.1%.

In foreign exchange, the dollar fell 0.35% against a basket of benchmark currencies as traders assess the uncertainties weighing on the economy.

Bond yields in Europe ended lower after an ECB survey showed consumer inflation expectations in the eurozone 12 months ahead were revised up again in October while those looking ahead three years have remained unchanged.

Oil prices fell due to an unexpected increase in crude inventories in the United States as uncertainties about the economy are already weighing on demand.

Market: Rise in sight in Europe after the Fed and before the ECB and the BoE