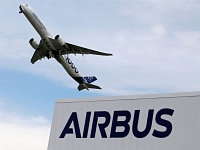 Airbus group: Analysts still seduced by Airbus, despite the abandonment of its 2022 delivery target

(News Bulletin 247) – The group judged that delivering 700 planes was now out of its reach and this Thursday shows one of the biggest drops in the CAC 40. Nevertheless, analysts remain confident on the file and only moderately lower their course objectives.

The Airbus action folds but does not yield. The aeronautics and defense group lost 2.6% on Wednesday on the Paris Stock Exchange around 3 p.m., accusing one of the strongest declines in the CAC 40.

This decline in the stock follows the announcement of the company which, on Wednesday evening, gave up on reaching its delivery target for the 2022 financial year, of around 700 aircraft, deeming it now “out of reach” due to a “complex environment”.

As a reminder, most of the payment for an aircraft is effective when the aircraft is received by its customer. It is therefore the aircraft manufacturer’s entire cash generation trajectory that depends on its rate of delivery.

However, this announcement does not really take the market by surprise, as press reports and analysts’ comments have cast doubt on the group’s target for several days. “The element of surprise is reduced by previously widespread skepticism regarding Airbus’ delivery guidance for fiscal year 2022 and production rate targets,” Stifel said. “No Christmas miracle”, sums up Deutsche Bank.

In addition, Airbus argued that the final delivery figure should not be so far from 700 units. Jefferies interprets this indication as a sign that the final result could be around 680 devices. The bank is thus counting on 679 aircraft deliveries for this year, against 696 previously. Deutsche Bank and Bank of America arrive at similar projections, of 681 and 680 devices respectively.

The group also maintained its adjusted operating profitability (adjusted Ebit) and cash generation targets for 2022, of 5.5 billion euros and 4.5 billion euros respectively. “It’s almost a positive thing because it means that Airbus has been able to set conservative financial targets. Assuming they eventually achieve deliveries of 680 aircraft that would mean they are able to meet their annual targets with 40 aircraft less than expected, their very first estimate of delivery in 2022 being 720 aircraft”, underlines Romain Pierredon, analyst at the independent research office AlphaValue.

Airbus has also changed its communication on its medium-term production objectives to take into account its logistical difficulties.

The aircraft manufacturer has indicated that it will “adjust” the ramp-up of its production of A320 family aircraft – Airbus’ single-aisle aircraft which are real bestsellers – in 2023 and 2024 with the continued objective of to reach a monthly rate of 65 aircraft. However, the group no longer gives a precise horizon for this target, whereas it previously mentioned “the beginning of 2024”, which suggests a discrepancy. Jefferies is now counting on mid-2024, Bank of America fears that it will be more for the end of 2024.

“Airbus is now adopting a more cautious tone on the evolution of the state of health of its supply chain, the improvement expected next year could be later than initially anticipated”, also notes Romain Pierredon.

Despite the difficulties that Airbus is currently encountering to raise its production rates, the group retains a strong rating with design offices.

Whether Jefferies, Oddo BHF, Deutsche Bank, Stifel or Bank of America, all reiterated their recommendation to buy on Wednesday. As Airbus evolves to 107 euros, their new price targets grant significant potential, which amounts to 20% for Deutsche Bank, the most cautious with a target of 130 euros, up to more than 70% for Bank of America which has a price fixed at 185 euros.

“Of course the market may be a little disappointed because the lower expected deliveries mean that the company will collect less cash in the short term. Now, the difficulties of Airbus remain very temporary, and on a horizon of six months on the supply chain should calm down”, emphasizes Romain Pierredon. “As demand for the group’s aircraft remains very strong, deliveries will eventually accelerate, which will boost Airbus’ results. This is clearly not a value to sell given its medium-term prospects”, develops the ‘analyst.

“Underlying demand remains strong, the bad news has now largely passed, which should clear the horizon for 2023,” confirms Stifel.

Facebook
Twitter
Pinterest
WhatsApp
Previous article
“Anyone who wants to divorce… raise their hand!”: Waiting for the premiere at KTHBE
Next article
The biography “Elvis” swept the AACTAs, Australia’s “Oscars”.