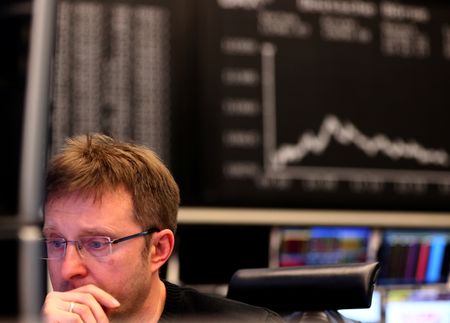 Market: Europe ends in the red, recession and rates have dominated

PARIS (Reuters) – European stock markets ended lower on Tuesday, penalized by the World Bank’s economic forecasts and concerns about interest rates, while on Wall Street, the indices moved without much change at mid-session in the absence of comments from Jerome Powell, the chairman of the Fed, on the evolution of the cost of credit.

The World Bank on Tuesday lowered its growth forecast for 2023, to levels close to recession for many countries. The international organization is thus counting on global growth of 1.7% for this year, which would mark the weakest increase in nearly 30 years, excluding the recessions of 2009 and 2020.

Regarding interest rates, Jerome Powell, the chairman of the American Federal Reserve (Fed) contented himself with declaring, at the Bank of Sweden symposium, that the restoration of price stability, when inflation is high , may require unpopular measures in the short term.

Two of his colleagues, Mary Daly and Raphael Bostic, had said Monday evening that interest rates in the United States, currently between 4.25%-4.5%, could peak above 5% for an extended period. , reviving fears of more significant monetary tightening than expected despite the slowdown in wage growth.

In Europe, Isabel Schnabel, a member of the Governing Council of the European Central Bank (ECB), said on Tuesday that financing conditions should be tighter and that inflation would not come down on its own. Unicredit assesses the peak of rates in the euro zone around 3.5% against 2% currently.

In Europe, all the compartments ended in the red, the biggest drop being in the assets of the distribution index (-1.36%) and that of basic resources (-1.16%), sectors sensitive to a downturn in the economy.

The new technologies compartment (-0.55%) suffered for its part from the rise in rate expectations.

In Paris, against the trend, Renault gained 2.17% thanks in particular to an agreement with Punch Torino in low-emission diesel engines. The daily Les Echos also reported that France would not oppose the rebalancing of the alliance between Renault and Nissan.

In Frankfurt, the German energy company Uniper lost 1.45% after the announcement of the resignation of the chairman of the management board Klaus-Dieter Maubach and his deputy David Bryson following the nationalization of the group.

In London, consumer stocks such as Ocado (-3.06%) suffered as NielsenIQ said it expected limited growth of around 5% in food retail sales in the UK. United Kingdom this year in a context of recession.

At the time of the close in Europe, the Dow Jones advanced 0.05%, the Standard & Poor’s 500 0.02% and the Nasdaq 0.08%, investors digesting the latest statements from Jerome Powell with a view now turned to the US consumer price figures expected on Thursday.

In values, Microsoft advances by 0.43%, the group planning to invest 10 billion dollars (about 9.3 billion euros) in OpenAI, the owner of the chatbot ChatGPT, according to the media Semafor.

Broadcom fell 3.2%, the Bloomberg agency having reported that Apple (-0.88%) plans to replace the group’s Wifi and Bluetooth chips in 2025 with its own products.

Boeing fell 0.35% after a recommendation downgrade from Morgan Stanley. The American aircraft manufacturer is also penalized by the setbacks of Virgin Orbit, whose action fell by 12.17% after the failure of a satellite launch in space.

RATES The prospect of prolonged monetary tightening drove bond yields on Tuesday: that of the ten-year German Bund gained 8.7 basis points to 2.30% and that of US Treasury bonds of the same maturity jumped by 10, 9 points to 3.62% at the close of trading in Europe.

EXCHANGES On foreign exchange, the dollar appreciated by 0.29% against a basket of six major currencies after hitting a seven-month low the day before.

Oil prices are up after the speech of Jerome Powell whose absence of comments on the rates does not allow to measure the impact on the economy: Brent advances by 1.05% to 80.49 dollars a barrel and US light crude (West Texas Intermediate, WTI) 1.25% to $75.56.

The London Metal Exchange (LME), the London stock exchange specializing in metal futures, said on Tuesday that it would unveil its action plan for the crisis that has hit the nickel last year.