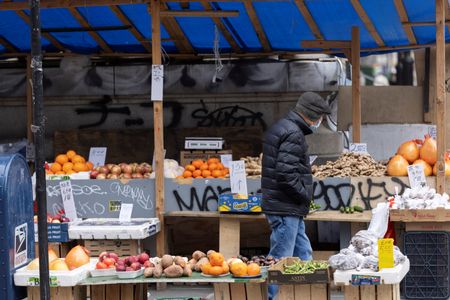 United States: First price drop in December since May 2020

WASHINGTON (Reuters) – Consumer prices in the United States fell in December for the first time in more than two and a half years, with prices at the pumps in particular continuing to fall, statistics showed on Thursday.

The Labor Department’s consumer price index (CPI) fell 0.1% in December, its first decline since May 2020, as economists polled by Reuters forecast zero inflation.

Over one year, inflation is up 6.5%, its weakest growth rate since October 2021, as expected by the Reuters consensus.

Inflation peaked in June at its highest since November 1981, at 9.1% on an annual basis.

Gasoline prices fell 12.5% ​​last month, according to figures from the Energy Information Administration.

Prices for used cars and trucks are also declining as supply increases.

While disinflation in goods seems to be taking hold, prices in the services sector remain high, supported by the rigidity of rents. But even excluding this component, inflation in services is sustained, reflecting still strong wage growth.

According to the institution’s economic projections announced after its last meeting in December, rate hikes of at least 75 basis points are expected by the end of the year.

The basic CPI index (“core”), which excludes the volatile elements of food and energy, was up 0.3% in December and over one year its increase was 5.7%, after +6.0%.

The moderation of inflation is good news for the Fed, but its officials are likely to wait for more proof of a lasting slowdown in prices before considering operating a real pivot in monetary strategy.

In addition to inflation, the labor market, which remains extremely tight, is the other variable monitored with the greatest attention by the Fed. The unemployment rate fell to 3.5% in December, its lowest level in 50 years

On the markets, the yields of Treasury bills fell sharply after the statistics of the Labor Department, that of two-year securities, the most sensitive to interest rate expectations, fell from 4.2% to 4.1551 %.

Futures on the major Wall Street indices are on the rise while the dollar fell 0.8% against a basket of benchmark currencies, the lowest since June.