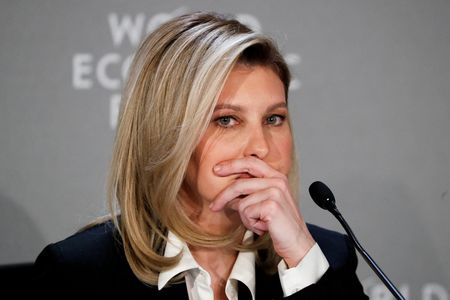 ZURICH (Reuters) – Ukraine’s western allies could speed up implementation of a 10-point peace plan presented by Kyiv if each of them takes on one of its components, the wife said. of the Ukrainian president in an interview published on Saturday.

Olena Zelenska, speaking from the World Economic Forum in Davos, told the Swiss daily Neue Zuercher Zeitung that the West’s failure to quickly provide the weapons needed for Ukraine to repel Russian forces had cost lives and caused the destruction of many infrastructures.

“The plan goes further,” she said. “It includes a judicial component, which notably calls for the creation of an international tribunal to judge war crimes, as well as the return of prisoners of war to Ukraine.”

“Each country can take on a component.”

In a ten-point peace plan presented last November, Volodimir Zelensky set out demands for food and energy security and the establishment of mechanisms to avoid an escalation of conflict in the Euro-Atlantic area.

Facebook
Twitter
Pinterest
WhatsApp
Previous article
Ministry of Rural Development: Resources of 500 million euros from the Recovery Fund for investments in the agricultural sector
Next article
Patras: The seven anti-authoritarians were preparing to strike with a powerful bomb – Checks if it is a branch of a terrorist organization

Solutions 30 se: The Solutions 30 group is back on the path to growth and the favor of the Stock Exchange