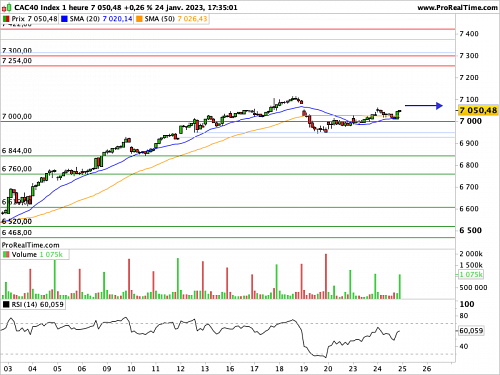 CAC 40: The confrontation between buyers and sellers is accentuated in the short term

“Markets have rallied since the start of this year, driven by the re-opening of the Chinese economy, falling energy prices and slowing inflation. a soft landing of the economy are increased, as well as those of a significant drop in inflation and interest rates,” reads a strategy note from the BlackRock Investment Institute. “However, the markets remain vulnerable to unpleasant surprises and do not seem fully prepared for the onset of recessions.”

In terms of statistics, operators will have appreciated the PMI activity indices (surveys of purchasing managers) are well received this morning, with regard to the very first estimates for the current month. The German industrial component, which traditionally has a strong impact, even rose above the 50-point mark, which separates, as a reminder, a contraction from an expansion in the sector in question. Passage above 50 also to report for the services component of the whole of the Euro Zone.

Chris Williamson, Chief Business Economist at S&P Global Market Intelligence, shed the following light on the survey’s raw data: a stabilization of the region’s economy in January.The contraction may indeed have peaked in October, when fears of an energy crisis began to fade, thanks in particular to the fall in prices, itself favored by particularly mild temperatures and generous government aid.”

Equivalent indicators will also have exceeded their targets on the other side of the Atlantic, while remaining well below 50 points. In contrast, the Richmond Fed’s manufacturing index continued its jittery swings, plunging back into negative territory at -11, completely missing expectations.

On the values ​​side, Dassault Aviation ended down 4.22% at 158.70 euros, suffering from a degradation of Exane BNP Paribas to “neutral” against “outperformance” previously. Carmat lost 3.4% after revealing its first financial objectives and announced that it is aiming for the break-even point in 2027. Arcure has accelerated the pace (+7.9%) and is still benefiting from its annual point of activity, revealing double-digit growth in 2022.

On the other side of the Atlantic, the main equity indices closed in mixed order on Tuesday, with the Dow Jones gleaning 0.31% to 33,733 points, and the Nasdaq Composite falling 0.27% to 11,334 points. The S&P 500, the benchmark barometer of risk appetite in the eyes of fund managers, ended on a flat note at 4,016 points.

A point on the other risky asset classes: around 08:00 this morning on the foreign exchange market, the single currency was trading at a level close to $1.0900. The barrel of WTI, one of the barometers of risk appetite in the financial markets, was trading around $80.20.

To follow as a priority on the macroeconomic agenda this Wednesday, the IFO index of the business climate in Germany at 10:00 a.m.

The flagship tricolor index began on Thursday 01/19, on a candle with an elongated red body, without shadow, a legitimate phase of correction, limited in absolute value, with regard to the initial advance since the beginning of the year. The amplitude of this profit-taking phase will serve as a framework for a future consolidation figure. Note the increase in the gap, at this stage, between the 20-day moving average (in dark blue) and its 50-day counterpart (in orange), with a marked bullish bias. A fundamental bullish message, therefore, which can be blurred by increased temptations to take profits.

Facebook
Twitter
Pinterest
WhatsApp
Previous article
Market: Towards a very modest decline at the open
Next article
Andrew Tate: ‘Toxic’ influencer speaks from prison – They want to bend me – My only friends are cockroaches