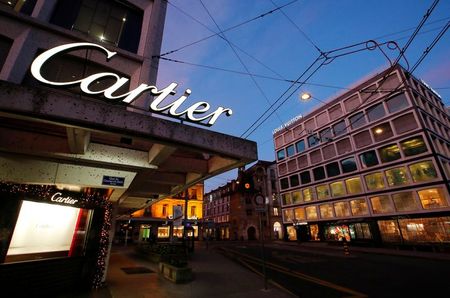 Richemont: First half rebound and search for investors for YNAP

ZURICH (Reuters) – Richemont on Friday reported a rebound in first-half net profit and sales on Friday, and also said it was in talks with Anglo-Portuguese online fashion platform Farfetch in view of to strengthen their partnership.

Other investors would also be invited to participate, he adds, with a view to creating an industry-wide neutral platform.

This decision should satisfy activist funds, such as Third Point, which would have recently acquired a stake in the group.

Longtime shareholder Artisan Partners, who owns 1.2% of Richemont, spoke to Reuters this week, pointing to the disappointing performance of YNAP.

“It’s an early Christmas present for Richemont shareholders,” said Jon Cox, analyst at Kepler Cheuvreux, referring to an “excellent” earnings release and the decision on YNAP.

For his part, Luca Solca, analyst at Bernstein, judged that the separation of YNAP from Richemont would create significant value for shareholders. He also applauded the solid performance of jewelry and the improvement in the watchmaking activity of Richemont.

The group, owner among others of the Cartier house, posted a net profit of 1.249 billion euros for the six-month period ended September 30, up sharply from the 159 million euros recorded last year.

The result also exceeds the expectations of analysts, who according to Refinitiv expected 1.151 billion euros.

Group sales stood at 8.907 billion euros, up 65% at constant exchange rates compared to the same period in 2020. The consensus was forecasting 8.536 billion euros.

Despite these results, Richemont remains cautious about his short-term goals.

“For the second half of the year, volatility is expected to persist, especially in terms of inflation and geopolitical tensions. The group will also face difficult comparisons,” the company said in a statement.

Last month, competitor LVMH reported organic sales growth of 20% in the third quarter and Kering posted a 12.2% increase. They both reported a slowdown in activity in Asia due to a resurgence of COVID-19 cases in the region.