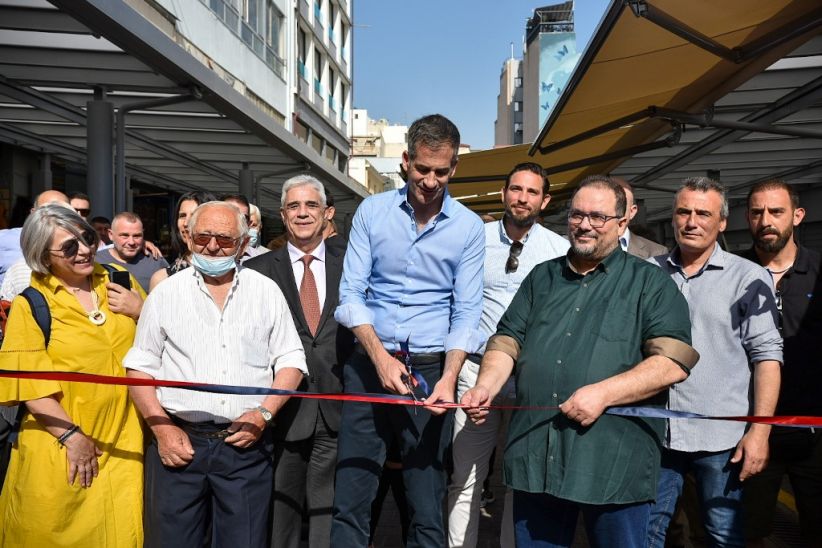 Bakoyannis: The heart of Athens beats in the renovated Varvakeio – See photos before and after

“Today, Varvakeios is turning the page,” he said Mayor of Athens, Costas Bakogiannison his first visit to the market, which renovated for the first time in 20 years. “The heart of Athens is beating here, in Varvakeio, it is beating loudly and we all have great joy and enthusiasm because today the market is turning the page. For many years it was a little forgotten, not by the professionals, nor by the Athenians who love Varvakeio and show it in practice. It had been forgotten by the municipality. However, this must change and today we are making a new beginning “, stressed Mr. Bakoyannis, having next to him the president of the greengrocers, Konstantinos Vassilopoulos at the opening of the lower part of Varvakeio, thanking him and” the technical team, the which ran this project in record time and made it a reality “.

THE historic market of Athenslocated in the center for 136 years, was upgraded based on principle of sustainability and with the criterion of high protection from weather phenomena. The building infrastructure of the sales areas of the vegetable market of Varvakeio, as well as the shelters, were completely reconstructed in 7 months, at the same time restoring any damages caused by the bad weather “Ballos” that hit Attica in October 2021. The project, budget ., was completed without interrupting the commercial activity for even one day, after the sellers were temporarily moved to facilities on Athinas Street.

“We welcome you to the renovated market, thank you very much for what you, your team and all those who have worked so far to deliver this wonderful spectacle to us. I hope this is the beginning of something more. “It was the first time that someone stood by us after more than 20 years”, Mr. Vassilopoulos pointed out, shortly before he cut the ribbon of the facilities together with the mayor of Athens. The president of the greengrocers noted that the vegetable market is now harmonized with the necessary health protocols. “We were in danger of the roof falling on our heads, we were in danger from all the weather conditions. “Now all this has changed, the shops are clean, they have new refrigerators and we will go further”, he underlined, adding that Varvakeios is a pole of attraction for tourists, who after the Acropolis choose it as a point of interest and “is our showcase”.

Among the interventions made by the technical services are the replacement of the wooden frames of the canopies by metal ones and their covering with special sheets that offer greater protection from the sun, but also the installation of new LED luminaires in two parallel light lines, the installation of waterproof awnings with aluminum arms, the replacement of the insulation of small gardens with synthetic membranes, in order to address the chronic problem of moisture leaking into stores.

The Damigou store has been located in Varvakeio for 100 years. He passed from his father to his daughter, Panagiota Damigou, and now his daughter’s daughter, Maroula Damigou, also works there. “Thank you for your work. Your work is very serious and right. We had works to see from your mother. You came and renewed our market. We keep it and you help us. Be well “, said Mrs. Panagiota. “It simply came to our notice then. Since 2004 it had to be renovated. “He did it for us, until he has internet for us,” her daughter added. But also from the nearby Zacharias store, which also passed from father to son, Mr. Zacharias, who opened his shop 60 years ago, welcomed Mr. Bakoyannis with obvious emotion.

The project was not exhausted outside the market but radical interventions were made inside the stores. The technical team of the municipality installed new ceramic tiles, in accordance with the appropriate sanitary protocols, removed any moisture, while replacing all suspended ceilings. In addition, the floors were improved with specialized materials, stainless steel sinks were installed and the cold rooms were completely reconstructed, with the criterion of protecting both the professionals and, of course, the consumer public. “A project is being performed, which has started 20 years ago. “The market has been reconstructed with new stores, modern, as it should be and as we deserve”, noted Mr. Bakoyannis, greeting sellers during the autopsy in the historic and now modern Varvakeio Agora.