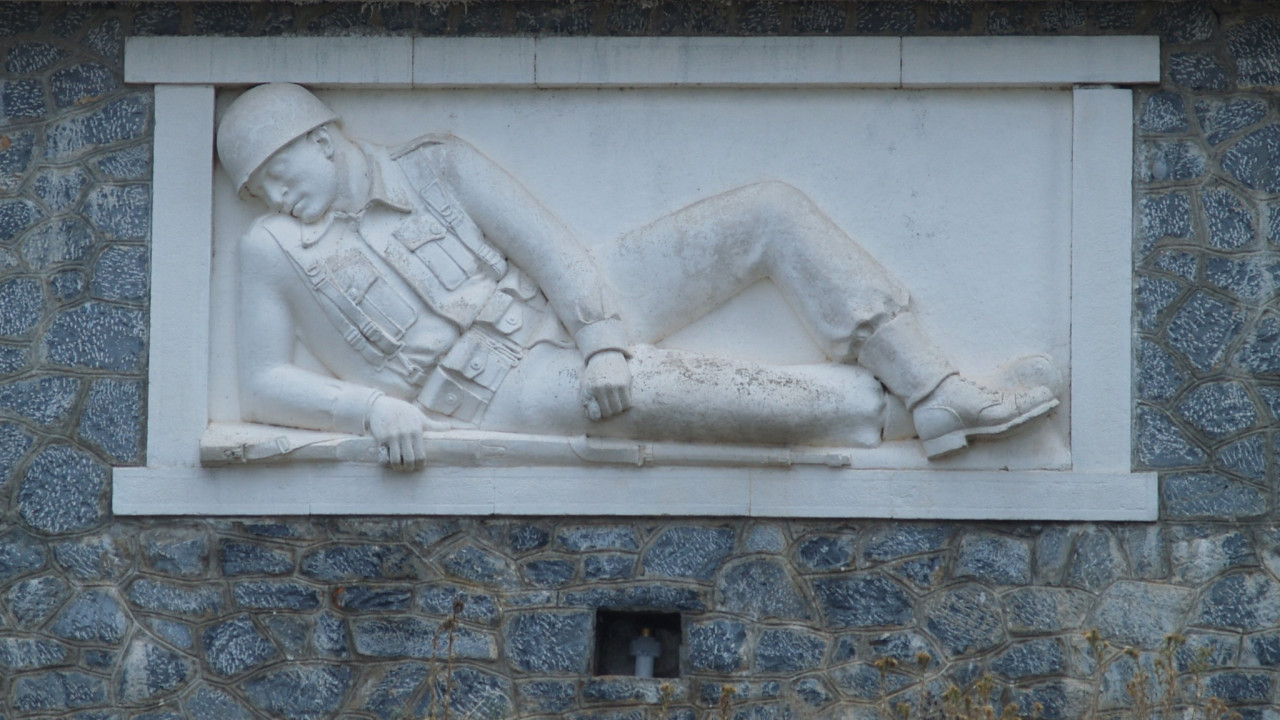 Years ago, the soldier artist who carved the monument around 1953, passed through the village and left a folder in the cafe about the then authorities of the place. Since then, traces of him have been lost.

Standing tall among the ruins of the barracks, in solitude and abandonment, stands the monument of the unknown soldier, in the former camp of Zarkos in the municipality of Farkadonas in the Regional Unit of Trikala, “looking” to find the soldier who carved it in this wonderful way.

According to the testimonies of Zarkinas, and what the Philologist – Director of the 4th High School of Trikala Athanasia Tsiotinou reports, the monument was designed in the 1950s, specifically around 1953.

“I remember my mother telling us, when she was a little girl, together with her friend and my father’s sister Eleni, that they used to go to the church of Agios Georgios and watch the soldier while he was working! They weren’t the only ones! All the children and young people of the village went to the cemetery area, talked and admired the young man who carved the inanimate material, giving it the form of the other infantryman, who had assumed the role of the model! Years ago the artist Fantaros passed through the village and left an envelope in Sotiris, in the “cottage” (cafe and tavern of the village) about the then authorities of the place”.

Read more: Head of GEETHA for October 28: Greece is ready to close all the mouths that threaten it

She recently received a phone call from two retired soldiers who, on the occasion of a post she posted about the memorial, became interested in it. In their effort to gather more information about the monument, they came to Zarkos, saw the monument, spoke with the president of Zarkos Yiannis Voulgaris and with local people, who offered to help, giving their personal testimonies and personal experiences!

“A phone call to a family friend of ours, who served his term in Zarko and has visited our village many times since then,” emphasizes Ms. Tsiotinou, clarified the situation even more. And he concludes by emphasizing: “The story of the unknown creator has taken its course! The head of the GES, Mr. Lalousis, is personally interested in the promotion of the monument, which by Christmas, will have conquered its own share in the history of our country.”

Finally, she points out to the Athenian-Macedonian News Agency, that “we owe the monument and we must highlight it! All the villagers must help in this direction. The Municipality of Farkadona and the Region of Thessaly can and should help highlight the history and architecture of the monument, which must soon be protected and maintained, before it is too late, before the monument fades away and its history is forgotten. We are very grateful to Themis Angelakis and Apostolis Daloukas for their interest in the monument of the unknown soldier and highlighting the history of our region!”.

Facebook
Twitter
Pinterest
WhatsApp
Previous article
SYRIZA: 400,000 euros direct assignments to an associate of Mr. Mitsotakis, and then they were teased by the “blue locusts”
Next article
Crete: Disturbance from the “barrage” of phone calls about placing explosive devices in businesses