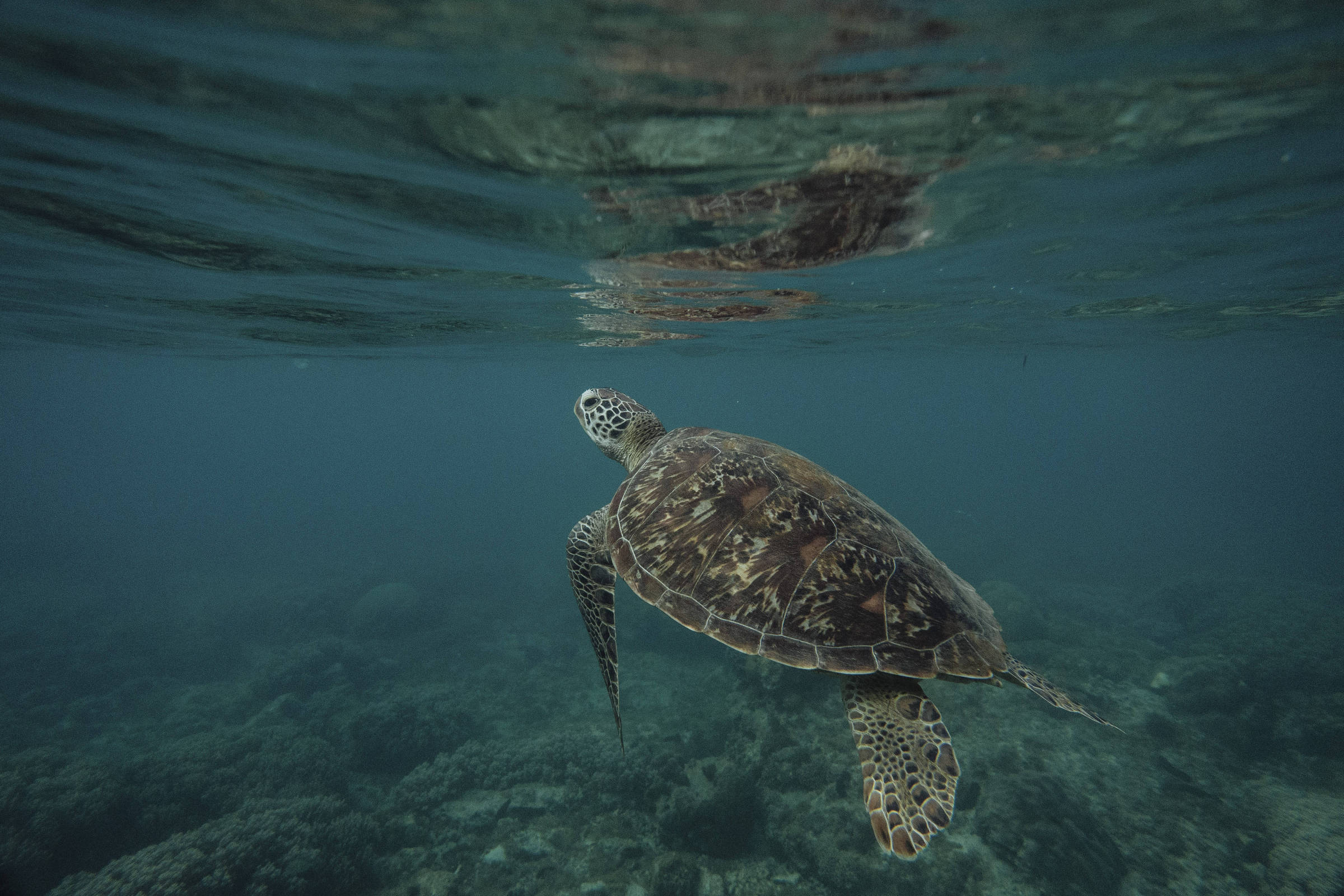 Sea Turtle Sanctuary Could End Due to Climate Change

In the past, the large green sea turtles were very afraid of humans, from which they fled as fast as they could.

“When the turtles saw people, it was as if they had seen a ghost,” said Mario Pascobello, a resident of Apo Island in the Philippines. “We used to kill them,” he explained. The island’s fishermen consumed the turtles’ meat and eggs.

Today, green sea turtles, a primarily herbivorous species that is at risk of extinction, live peacefully in the shallow waters off the island’s coast, undisturbed by fishermen, who share the waters with them.

But if fishermen no longer pose a threat to turtles, they face another man-made danger: climate change.

“The increase in temperature in coastal areas, caused by climate change, will kill corals and fish larvae,” said marine biologist Angel Alcala, who began visiting the island in the 1970s. “Before, typhoons arrived in the Negros area only every ten or 15 years, but today Apo is hit by a typhoon every four or five years.”

The community is still recovering from the last typhoon, and in recent years it has had to restore part of its reef that has been damaged in bleaching events, in which superheated marine water causes the coral to expel the plant-like organisms that live within it. causing corals to turn white and putting them at greater risk of dying.

A small volcanic islet situated more or less in the center of the Philippine archipelago, Apo is home to a pristine marine sanctuary in an area known as the Amazon of the Sea due to its great biodiversity. The waters around the islet are believed to be home to 400 species of coral.

The harmony prevailing today between turtles and humans was not easily achieved.

The island community is mainly made up of fishermen. At first, they strongly opposed the creation of the sanctuary, fearing that conservation efforts would impose restrictions that would plunge an already deprived area deeper into poverty.

“I remember thinking that our island could be taken from us,” said elderly fisherman Leonardo Tabanera. “What if we couldn’t fish anymore?”

But the marine sanctuary created in 1982 ended up being hailed as a successful example of how negotiations and mutual concessions are able to balance the needs of a local population – which depends on the extraction of natural resources for their survival – with global conservation goals.

“Which is more important: the sanctuary or the people who need to feed?” said Pascobello, one of the community leaders. “It takes a lot of discussion, a lot of dialogue.”

At his mother’s urging, Pascobello said, he eventually opened up to the sanctuary idea, but only if the community and conservationists could arrive at what he described as “a situation that benefits everyone.”

After years of discussions, a solution was reached: the fishermen agreed to create a no-go zone – but only in an area where they rarely fished anyway.

“I suspect that the fishermen accepted that we protect the part of the reef that wasn’t really very productive from their point of view,” Alcala said.

The local knowledge that fishermen had of the reefs, which allowed them to identify an area they could give up, turned out to be crucial in helping to protect the waters, Pascobello said. The area in which fishing was prohibited ended up functioning as a highly productive breeding ground for the region’s fish.

“If I ask a scientist where the grouper lays its eggs, no one will be able to answer me,” said Pascobello. “But if I ask the fishermen, they know.”

By agreeing to leave the part of the reef that plays a crucial role in fish reproduction completely untouched, Apo has achieved the solution he was looking for and that benefits everyone.

“In ten years, the biomass of fish has multiplied by three,” said Alcala. The result was beneficial for the environment and for fishermen.

Since then, the Apo community, which has less than a thousand inhabitants, has already helped several communities in the Philippines and even Indonesia to create their own sanctuaries, always stressing the importance of taking into account not only the knowledge of scientists, but also the local know-how.

The increase in fish biomass was not the only economic benefit of the sanctuary: it has also been attracting tourists. Apo is now visited by scuba and snorkelers.

Fishing is still a central element of the island’s identity.

Apo kids often go to the beach at sunset. They gather around natural pools, examining specimens in the crystal clear water, picking up shells and rocks to sell, crustaceans to play with and fish bait for their parents. Using homemade swimming goggles, they dive to untangle fishing nets. Some of them go out alone in small boats.

Apo conservation efforts have been ongoing for 40 years, with little outside financial assistance. But they are now threatened by the accelerating pace of climate change, which disproportionately affects the poorest populations — and often hits the hardest communities that contribute the least to carbon emissions. This is the case with the inhabitants of Apo, who spend a good part of the day without using electricity.

Apo fishermen like Tabanera know that climate change poses an existential risk for them, but on a day-to-day basis they focus on the immediate struggle for survival.

“We are poor, we don’t have much to be proud of,” Tabanera said.

Still, he sees the turtles’ presence on the island as a positive thing, a sign that Apo’s waters are healthy enough, at least for now, for fishermen to put food on the table. And he hopes the tourists who come to see the turtles will help spread the word about what is done on the island and the bleak future it faces as a result of climate change.

“As little as we earn from the sea, our dream is to continue to earn a living from it,” he said.

In his house, Tabanera has an “altar” of lucky hooks, all rusted from the salt water and damp air. They remind him of some of the times he had the best results with fishing.

“Someday, who knows, everyone will be able to improve their condition”, he says.

Facebook
Twitter
Pinterest
WhatsApp
Previous article
The murder of the 43-year-old woman by her husband, in Sotiritsa, Larissa, is being revived today in the courts
Next article
Charles turns 74 – How he will celebrate his first birthday as King