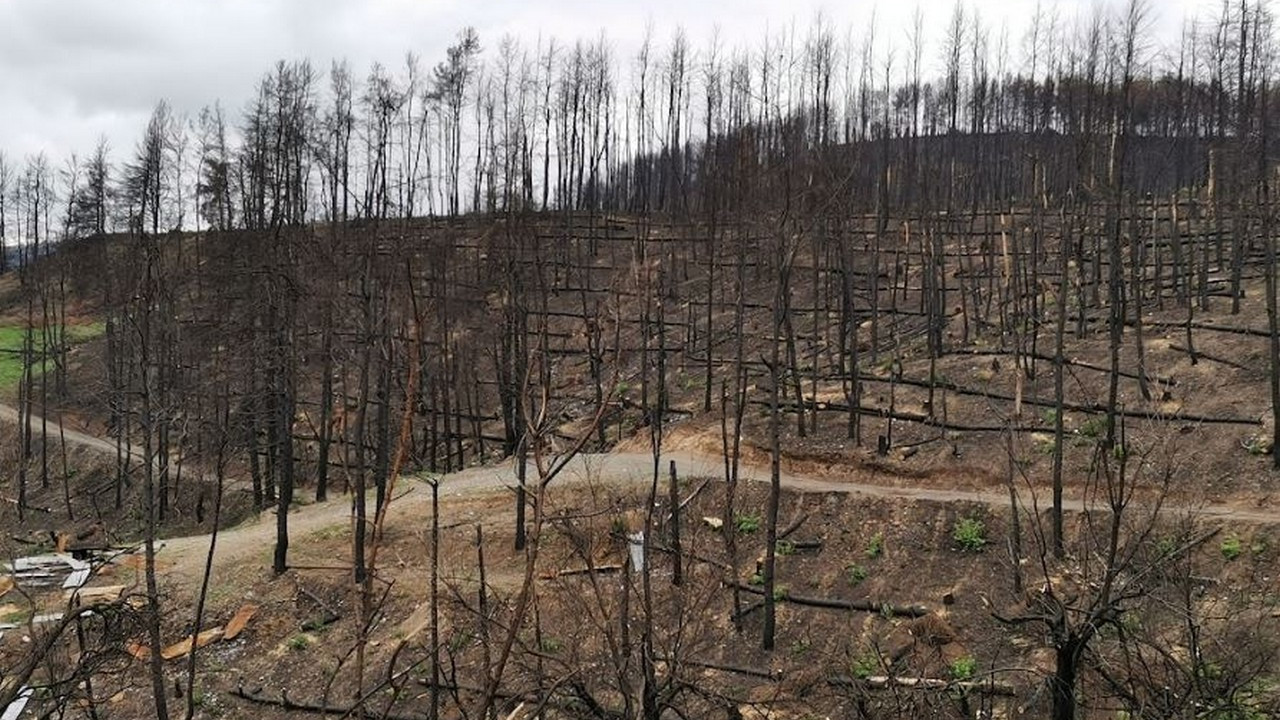 Is there life after fire?

One of the biggest environmental disasters in the history of Greece since last August, 500,000 hectares of forest burned in Northern Evia.

Firefighters and residents gave a titanic effort to extinguish the fire which, in addition to trees, took with it houses, animals, crops, beehives and fundamentally changed the life and daily routine of the local community. The ecological, economic and social consequences were predictably enormous.

But the solidarity of the world, the immediate mobilization of state and private agencies and the desire of the people to see their place again as they lived it, have begun to bring back hope and greenery to the fire-stricken areas.

PPC is one of the companies that practically contributed to the restoration of the natural wealth in North Evia. As part of the corporate social responsibility program PPC ENERGOS, already just a few days after the fire was extinguished, announced a donation of a total amount of €3,000,000 for the implementation of anti-corrosion and anti-flood interventions as well as reforestation projects in areas that needed immediate protection from the total area of approximately 380,000 acres under the Limni Forestry Department.

For the smooth execution of the works, the sponsorship was allocated directly by PPC to the local Forestry Cooperatives, who know the needs of the area better than anyone. As the President and CEO of the company, G. Stassis, stated “PPC will help decisively to deal with this environmental disaster, with sustainable development actions and above all with absolute respect for people and the environment».

A year later, the results are already evident. With the sponsorship of PPC, 60 anti-flood projects have been implemented, 10,000 meters of board walls, 10,000 meters of trellis, 5,000 square meters of log barriers and 300,000 meters of log fences have been constructed, which also help in the regeneration of the forest, holding the seeds in the soil. The next step is reforestation. Until now, several fire-resistant trees have been planted such as carob, kochikia and cypresses, as well as halepi pine trees, since Evia is their natural place.

In the field trip carried out by PPC in the summer of 2022, in the areas where restoration and reforestation projects are being carried out, professionals and residents describe last year’s events as they experienced them themselves and recount everything that ties them to the place. “When the evacuation message came, we took the dogs, the cats, the hens to Cold Spring and then turned around and got the horses. Six horses did not follow, but because they had learned to move freely, they did not become trapped in the front of the fire and were saved. Despite the odds, I will stay here in the caravan, feed my animals», characteristically says Nancy Kourellou, Representative of the Philanthropic Association.

The first concern always after extinguishing a fire is to contain the soil in the forest. As the Forester of Lake Evia, Spyros Zigiris, states, “What we did after the fire in August is we declared the area that burned as reforestable and immediately went ahead with anti-erosion and anti-flooding works. Such projects, according to the studies, will be 260». People working on the restoration projects emphasize how important it is that through PPC’s sponsorship new jobs were created, among other things, “We work in corrosion inhibitors and we have a living wage. We live for the forest, but the forest also lives for us».

In the case of Evia, the regeneration of the natural environment is directly linked to the recovery of the local society, both psychologically and economically. The immediacy of the response and the speed with which the restoration works are progressing have given the residents hope and motivation to stay in the place, as happened to Vasiliki Manaritsa, Agriculturalist, who returned after 10 years in Evia to work, “We young people are used to things being done at a fast pace and here indeed everything happened very quickly and this is largely due to the determination of PPC. I am determined to stay in my place so that we can rebuild the forest as it was before, beautiful and full of life.».

Christos Kentris, a fourth generation beekeeper in North Evia, lost half of his bees in the fires. Now, he feels excitement and optimism to see his bees fly to new pine trees. “Last year in August everything was black. This year the color has started to change».

See the itinerary of PPC in North Evia here:

Facebook
Twitter
Pinterest
WhatsApp
Previous article
Switzerland and Cameroon face each other at 7am in the Qatar Cup; know where to watch
Next article
‘Life of the Gods’: Met exhibit on Mayan art – See photos and video