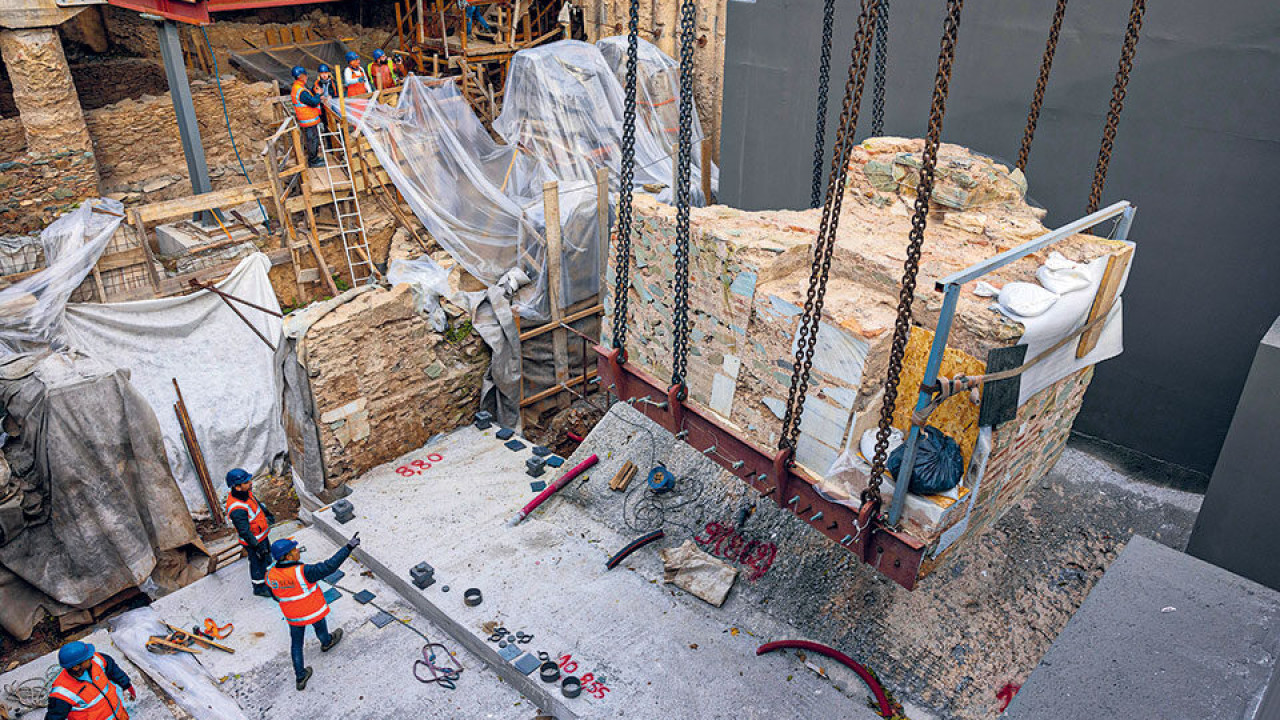 The queue in front of the Papal Foundation, early on Sunday morning, was endless. Thessalonians waited patiently for their first descent into the bowels of the metro from its seventh stop, not of course as passengers, but as visitors.

“Thirty-five years I have been patient, two hours is nothing. Who knows, I might never make it,” said an elderly gentleman just before descending to his underground facility. At the same time, at the metro station “Agia Sophia” there were no visitors, but antiquities. The operation to return the Crineus of late antiquity had begun. Two large cranes were lifting the two massive sections of its masonry to reposition them in the position where it had been uncovered some three years ago. The impressive, almost cinematic transfer of real estate finds from Kalochori to the center of Thessaloniki, on a Sunday when the market was open, was a spectacle. Another queue of curious passers-by had formed around the blocked off area, to capture the unique sight with their mobile phones.

The green light for the return of Krinaios was given last Tuesday by Central Archaeological Council who gave an opinion in favor of the study for the formation of the archaeological site in Makedonomahon square, where the subway works brought to light important findings from the timeless city. The centerpiece of this is the Crineum/Nymphaeum of monumental dimensions of late antiquity, the most imposing and luxurious architecture of its kind, in terms of its dimensions and state of preservation, that has appeared in Thessaloniki to this day.

The monument was discovered in March 2016 northwest of the “Agia Sophia” station, at the junction of decumanus maximus and cardo streets – the timeless crossroads of Egnatia and Agia Sophia streets -, where excavations revealed building complexes with mosaic floors, marble and plaster decorations .

The Krinaeo/Nymphaeum was detached so that after the completion of the technical work at the “Agia Sophia” station, it would return to its place and be highlighted by country together with the shops and workshops of the market of early Byzantine times that were revealed northwest of the square by the extension of the excavation. The new study envisages a canopy on two different levels that will cover and protect both the finds and the entrance to the metro station. It covers almost a building block in length, while the archaeological site will be visible as well as the Byzantine temple of Achiropoiitos, one of the most important monuments of UNESCO’s world cultural heritage.

The operation to return Krinaios will be carried out piecemeal and will be completed over three weekends. Last Sunday, two large sections of it were repositioned, approximately five meters below the surface of today’s Egnatia Street. They form the back of Crineus. The P-shaped building survives at 15.45 m long, 1.85 m wide and 2.85 m high. It has semi-circular walled niches, while lead pipes give interpretations of the hydraulic infrastructure of its original tank. The eastern side of the pio-shaped nymphaeum is not preserved.

“Its construction dates back to the years of the successors of Constantine the Great in the second half of the 4th century, at the same time as the construction of the marble-paved decumanus road”, the research archaeological team of Polyxenis Adam-Beleni, head of the General Directorate, explained to us at the time of its discovery. of Antiquities of the Ministry of Culture, and S. Vassiliadou, S. Tzevreni, Z. Al Saayah of the Ephorate of Antiquities of Thessaloniki. Krinaeo, according to the study, was remodeled in the middle of the 5th century and remained in use until after the 6th century, when north of the ancient road a monumental sigmoid square sealed the ruins of older buildings of the urban fabric.

Despite its partial rescue, the Crinaeo/Nymphaeum is the most imposing and luxurious building of its kind in terms of its dimensions and state of preservation. “Monumental fountains/nymphaea with niches, columns, statues and colorful marble decoration – donations from wealthy citizens – adorned key points of cities in the Greco-Roman world. Their use had a functional goal, that is, to serve the daily needs of the citizens”, the archaeologists explain. It is the fifth known Krinaeo in Thessaloniki. In addition to the Fountain preserved outside the Bey Hammam, three other smaller ones have been identified in the city center: the Nymphaeum on a plot of land at 91 Philippou Street, in the sanctification of Agios Ioannis, as well as the original form of the later Byzantine sanctification fountain in its crypt Basilica of Agios Dimitrios.

“The Nymphaeum model of the “Agia Sophia” station belongs to the type with a theatrical facade. Its size, imposed by its volume and height, would make it visible from everywhere. It is the most monumental, so far, Nymphaeum of the city and one of the most imposing in the Roman world”, the archaeologists argue. “It follows the standards of Roman antiquity, such as the luxurious Nymphaeum of Miletus, the Nymphaeum of Trajan in Ephesus or the three-story Nymphaeum of Hesperus, which are the closest parallels to that of Thessaloniki. The rebuilding of another Fountain just three blocks east of the Fountain in front of the Bey Hammam that was erected at the same time shows that in the second half of the 4th century a program of urban reorganization and beautification according to the standards of antiquity took place in Thessaloniki. Unfortunately, the sponsor’s name has not been preserved.”

After the conservation and highlighting of all the findings of the square, Krinaeo will be visible from the Egnatia sidewalk and also from the corridors that will lead to the entrance of the station. The start of the metro operation will also mean the opening to the public of a new archaeological site in the heart of Thessaloniki.

What remains is the repositioning of the antiquities (92%) at the “Venizelou” station, in the same position and level which is planned by the metro administration in April 2023. The operation, which will close an open wound that divided Thessaloniki and the scientific community , will last for many months. At the “Venizelos” station, a monumental urban complex was revealed that saved an entire section of the central street of late Roman / early Byzantine Thessaloniki in its entire width (decumanus maximus), its intersection with a vertical street (cardo), a quadrilateral at the point of intersection of the streets , public buildings, marble-paved square and later shops of the city’s Byzantine market.