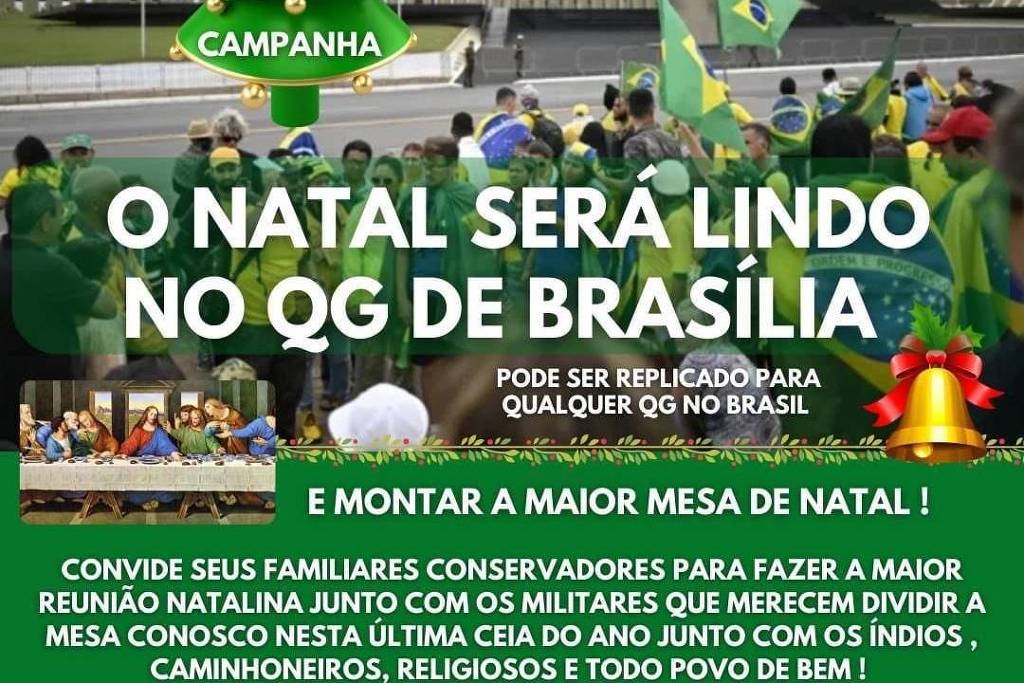 “Do we really need to stay here?” It’s almost Christmas…

“What is this traitor talk?” If you weren’t my son, I’d think you were a leftist infiltrator! We are patriots. We need to stay in front of the barracks to save Brazil from communism.

– The president. We are here to authorize the use of article 142, the GLO, all within the four lines. SOS Armed Forces!

– Where is the president? It disappeared after the elections. Should he not be with the people?

– He is coordinating the FFAA to fight the left and Xandão Cabeça de Ovo. Nine does not go up the ramp. Brazil above all.

— Is not God above all? Head, kkkkkkkkkk!

“Shut up, brat!” Where have you ever seen playing with something so sacred? We are Christians!

– Christmas is a Christian festival, isn’t it? Why aren’t we at home, with Mom, with the family together?

– Because the president needs the people on the street to free Brazil, how many times do I need to say it? Besides, your mother doesn’t want to see me even painted green and yellow.

– That accursed commune, petralha! Just like the sister! But let’s stop talking about your left mother.

– He finished. I gave the last package to a homeless person.

– Like this??? The biscuit was our property. Are you turning into a bitch from Sickle of São Paulo? From Globolixo? Get a little hungry to learn. You’re almost a man, enough of the faggot.

“Fourteen minus one, do you understand? Nobody here says the number of the orcrim, the gang that stole Brazil!

– Yeah… sorry. It’s just that I’m really hungry. Can you lend me your card so I can buy a snack at the snack bar?

– It does not give. Your mother blocked my joint account card.

– No way. But I will say that I am also hungry. Where are the barbecue people? Where did the lunch box go? These peddlers abandoned the cause. But I still trust in victory. God is on the side of good people. And He guides the president.

“Look over there, Dad. That man is eating a sandwich. Looks like there’s a bag full of them… I’d go there and ask, if sharing food wasn’t a socialist thing.

– Goodnight friend. Would you happen to have a sandwich left over? My son and I are hungry.

– Clear. You can take it. Patriot helps patriot. I brought several to camp for Christmas.

– God bless you. (Chews.) How delicious. Which is?

– Mortadella. It was on sale at the neighborhood bakery.

It was never known who the mortadella man was. He who died disfigured, crushed next to the wall of the barracks at the exact moment when the clock struck zero on the 25th of December.

The good patriots distributed the sandwiches in equal parts and thanked the grace of the meal to the baby Jesus.

Facebook
Twitter
Pinterest
WhatsApp
Previous article
Panel SA: BRL 543 million in agreement on Wesley and Joesley’s accusations is a pittance, says investor association
Next article
US to Putin: “Since you have recognized that there is a war, withdraw troops from Ukraine