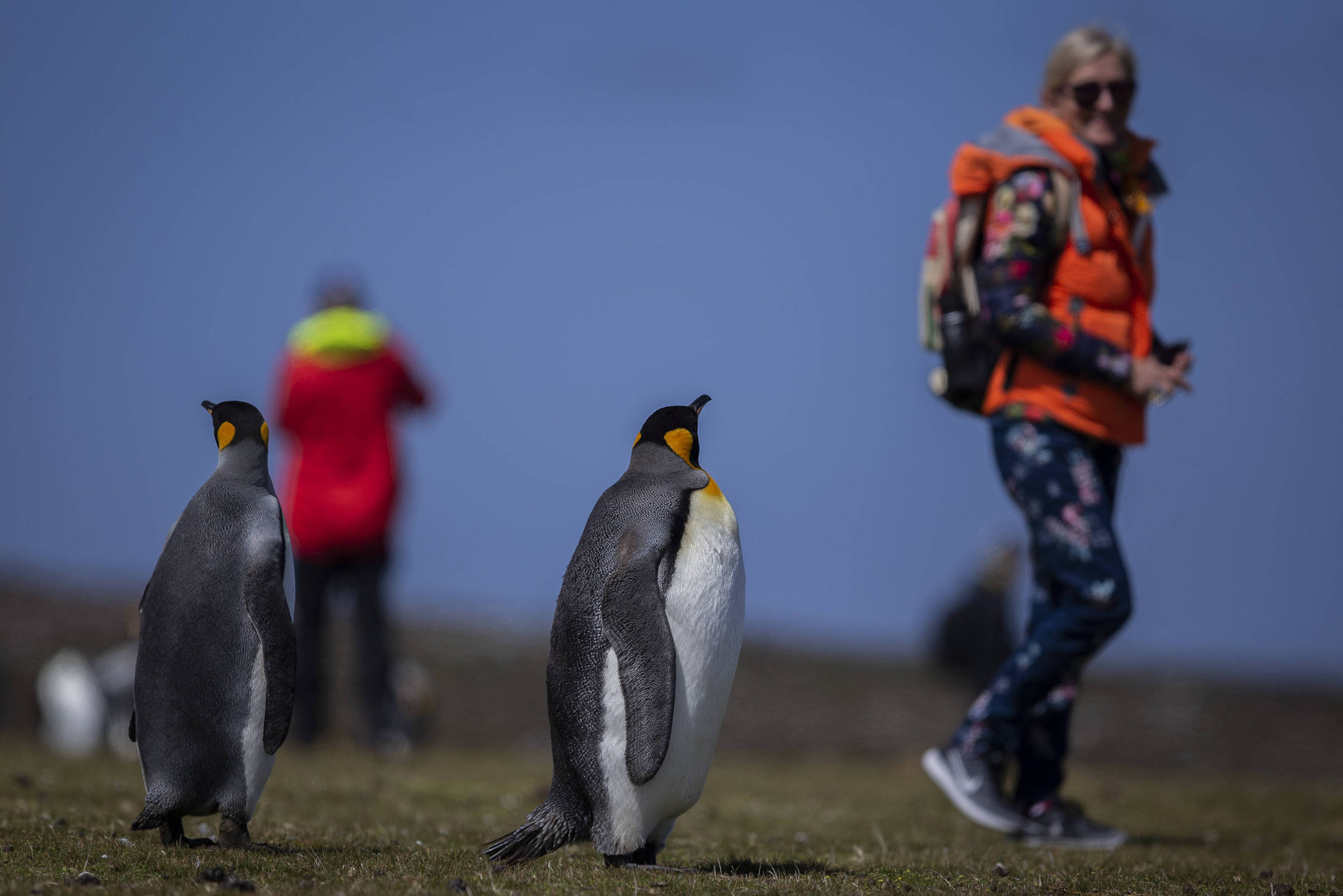 Upon returning from the beach to their colony, a group of gentoo penguins come across an elephant seal sleeping on the path they usually walk by, by the edge of the lagoon. They turn around and decide to cross the lagoon, but the elephant seal, as if playing, enters the water and crosses the new route.

The group, now joined by other penguins that followed, walks from one side to the other, not knowing where to go. They try to exit on the opposite side of the original path, but are prevented by the vegetation, then they analyze the route overland next to the elephant seal and finally decide to cross the lagoon in a hurry.

The scene is accompanied by the report of the Sheet and by a couple of Swiss tourists, who enjoy the experience of participating in an “assembly” of the gentoo, a species known as the fastest swimmer among birds. Around the lagoon, and inside the water, dozens of elephant seals enjoy the afternoon sun.

They are on Sea Lion Island, one of the tourist destinations of the Malvinas Islands (called Falkland by the British), an archipelago 660 kilometers from the south of Argentina that hosted the last major war on the South American continent, in 1982.

In the late afternoon on South Beach, gentoos “surf” the waves after feeding near a patch of seaweed after the breakers.

The island was a sheep farm until 2009, when it became a national park. In addition to gentoos and elephant seals, it is also home to Magellanic penguins and yellow-crested penguins, also known as “rockhoppers”, caracara hawks and the sea lions that give it its name.

It houses an inn with a maximum capacity for 22 guests with conditions to pay 185 pounds (about R$ 1,180) for the daily rate with three meals included, in addition to flights in small twin engines operated by the official air service of the archipelago. The price of flights varies, but the owner of the place, Mickey Reeves, says they are, on average, 200 pounds (R$ 1,280).

It is not the only destination in the archipelago where you can walk side by side with animals. About a two-hour drive from the capital Stanley, for example, is Volunteers Point, a sheep farm that is home to colonies of Magellanic penguins and king penguins, its main attraction.

Price is negotiated with tour operators, but can be as low as £200 for three people in a vehicle.

In the place, it is possible to walk among the king penguins, a large species, with yellow spots on the chest and neck, and their chicks with brown plumage. The many sheep on the farm coexist peacefully with the birds, very close to the colony.

Other colonies of gentoos and marine mammals can be visited by car, such as Cape Dolphin, about four hours from the capital.

In the region, there is accommodation with capacity for ten people divided into three rooms, with a daily rate of 35 pounds (R$ 224) per adult and 15 pounds (R$ 96) for children from two to 16 years old.

Although the name of the place suggests, there are no dolphins in the place, named after a ship that sank there —like Volunteers Point and other points in the archipelago.

Getting to know the islands, however, requires planning and patience. Malvinas receives only one commercial flight a week, which departs from Santiago and stops in Punta Arenas, Chile — and once a month with a stop in Puerto Gallegos, Argentina.

Leaving from Garulhos or Galeão, in Rio de Janeiro, for example, it takes about eight hours by plane, not counting waiting times at airports or possible nights in the Chilean capital, depending on the connection.

In 2019, Latam started a monthly connection between Guarulhos and the archipelago, but the line was suspended with the onset of the pandemic and never resumed. The company does not reveal the reason, limiting itself to saying that there is no deadline for the return of the flight, which stopped once a month in Córdoba, Argentina.

The difficulty in booking tours or finding prior information is another obstacle, according to the few Brazilian tourists who were on the same flight as Sheet. It’s difficult to find prices on official websites, and bookings for local flights or car tours often have to be done by phone or email.

With only 3,600 inhabitants and politically isolated from the mainland, as they are still the target of Argentine sovereignty claims, the islands have access to internet via satellite, which imposes more obstacles to communication. Tourists rely on cards that cost between £5 (R$32) for one hour of access or £30 (R$192) for 24 hours of access.

There are no 24-hour cashiers, but most establishments work with credit cards, with the exception of some pubs, including the famous The Globe and Victory Bar, both in the Philomel Street area, in downtown Stanley, where Groovy’s is also located. , which often has karaoke nights.

But nightlife in the city ends early: pubs have to close at 11:30 pm and restaurants tend to close at 10:00 pm. For food, it is worth visiting the Waterfront Kitchen Cafe and the recently opened UnWined, a wine house with a menu of snacks, such as squid stuffed with cheese and sausage.

The islands also offer tours of places where Argentines and British fought in 1982. In the Goose Green region, for example, there are memorials at important battle sites and the Argentine Cemetery, where 237 soldiers from that country are buried.

The best time to visit the archipelago is summer, when temperatures are milder and days with blue skies are less rare. But even so, thermal clothing and heavy coats are highly recommended, as strong winds usually knock down the thermal sensation.

To leave the country, it is necessary to pay a fee of 26 pounds (R$ 165) at the airport, where the visitor will certainly see faces he met during the trip —as there is only one flight a week, check-in, security and boarding services are provided by people working in other jobs such as hotels, bars and even a member of the local Legislative Assembly.