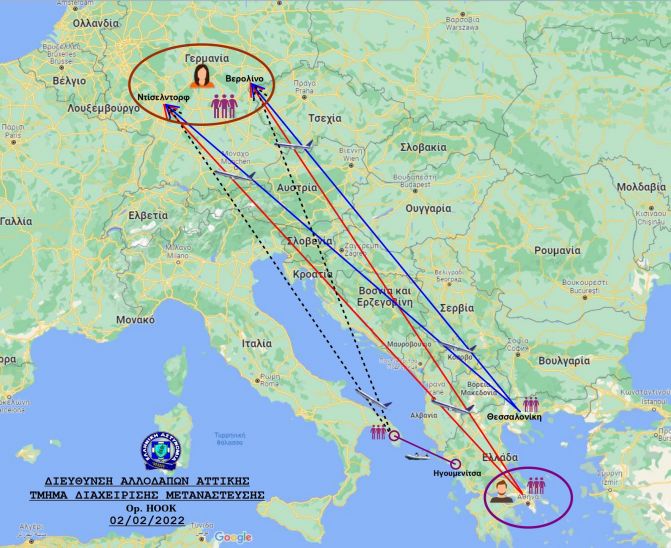 A plane crash gave about two and a half years of “extension of action” in one of the serious circuits of illegal trafficking of young immigrant children, from Greece to Germany, which was finally dismantled two days ago, within a joint venture of the Directorate of Immigration Management Attica Foreigners, implemented under the coordination of EUROPOL, with the participation of German police authorities.

The whole company, codenamed “Operation Hook” is part of the implementation of the National Business Plan (NCS) and the EMPACT program, to combat illegal immigration, led by our country.

It is an organized circuit in detail, since it even had “structures” with children’s rooms, both in Greece and in Germany, with a special babysitter, as the children were aged from 3 to 7 years and needed care, until reach their destination.

For the transportation of each child, the members of the circuit received from 4,500-6,000 euros, while they also facilitated adults to also go to Germany with passports that cost from 500 to 1,200 euros each.

Among other things, a 41-year-old Syrian man was arrested in Athens, allegedly as the leader of the criminal organization, while a criminal case was filed against 5 other foreigners, 2 of whom are permanent residents of Germany. Another woman is also wanted, who has been issued a European Arrest Warrant for her involvement in illegal immigration.

The material gathered revealed the involvement of the transnational criminal network in at least 10 cases of illegal immigration, promoting a total of 7 minors and 5 adult immigrants, with a final destination in Germany.

The dismantling of the circuit, which had a novel development, is essentially a success of the Greek authorities, as, in September 2019, they had the information about the transfer of a 3-year-old girl, from a young woman from Syria, who received it from Athens and flew to Germany.

The Hellenic Police informed the German authorities to check it, but due to an unexpected development, its arrest was canceled and with it the revelation of the circuit. The plane crashed during the flight and was forced to land in Italy, from where the woman managed to transport the little girl to her destination, avoiding control at the German airport.

However, this was the beginning of the “dismantling” of the circuit, as the woman entered the microscope of the police authorities in Germany and it was found that she often made short trips to Greece.

She is a 26-year-old, legal resident of Germany, mother of one child, who played a key role in the organization, as she made the transport of the children appear as their mother, either with the details of her real child or with other elements. He also handed over to the leader of the organization the documents they used for each child, or for their parents, who hoped that they would follow them at some point.

The documents they used were bought on the black market by legal immigrants in Germany. Among those accused of being a key member of the organization is another 32-year-old Syrian, who bought the documents and at the same time received the 26-year-old children in Germany and temporarily hosted them.

The investigation revealed that the “headquarters” of the organization was an apartment of 120 sq.m. in Agios Panteleimonas, rented by a 41-year-old Syrian man, who is said to be a leading executive.

In this apartment he had set up a room for temporary accommodation of children, while he also had a woman from Syria, who played the role of babysitter for as long as they lived there.

The transfer was done by air from the airports of Athens and Thessaloniki, directly to Germany, or via Spain, Switzerland and Italy, or by ferry from Igoumenitsa to Italy and from there by various means to Germany.

According to a police source, the final destination of the children was usually some relatives in Germany, but indicative of the anxiety of parents to send their children somewhere they thought they would have a better future, is that they took the risk of ending up in some structures. in Germany, which has happened in some cases.

The German public has paid special attention to the case, as the BILD newspaper has an extensive article, mentioning the actions of the Greek Police.

Investigations are ongoing in Greece for any other members of the organization, as well as by EUROPOL, in order to determine if there are branches in other countries.