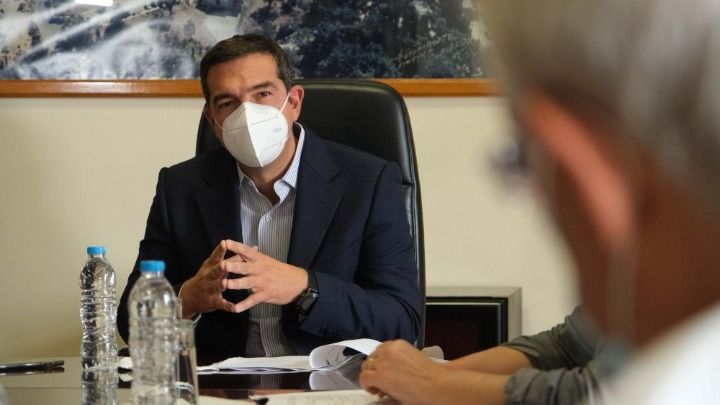 Ptolemaida – Tsipras: Mitsotakis is a denier of reality

A special development plan of SYRIZA-Progressive Alliance for equitable development in Western Macedonia, which will have the clause of zero social and development deficit, will be presented by the president of the party Alexis Tsipras in his speech tonight in Kozani, 7pm. as he said in the meeting with representatives of the local government and other bodies in Ptolemaida.

Regarding the coronavirus pandemic, Mr. Tsipras accused Prime Minister Kyriakos Mitsotakis of being a “denier of reality” and suggested taking immediate emergency measures such as ordering private and military clinics and strengthening the NSS.

“Mr. Mitsotakis has exceeded all limits,” said Mr. Tsipras, referring to what the Prime Minister said in Parliament about the intubation of patients with covid outside the ICU. “We are afraid that we are in a very difficult and complex situation, which is characterized by a lack of confidence, and we have a prime minister who presents himself as a denier of this reality and yesterday presented himself as a denier of the need for an ICU and a strong National Health System. “the same to be inside the intensive care unit and the same to be outside it casually intubated. It transcends all boundaries of connection with reality.”

The president of SYRIZA-PS. He referred to data that, as he said, were given to him for the Kozani Hospital, according to which in November, 12 people were intubated outside the intensive care unit and 8 of them died.

Regarding the accuracy, he criticized the government, saying that the measures he has announced are “crumbs” and repeated the proposals of SYRIZA-PS that he submitted from the podium of the Thessaloniki International Fair.

Especially for PPC, he said that the concession of 17% is a “crime” of the government and spoke of “deceit”, as, as he stressed, “households become slaves to the predatory dispositions of speculators”.

In Western Macedonia, the crisis is threefold, because the pandemic and, to be precise, the de-ligation, which is done by the government without a plan, is added, while it must be fair and not violent, he pointed out.

“There is a danger that Western Macedonia will turn into a black spot on the map,” Tsipras said, noting that 2,000 jobs have been lost recently, while stressing that public resources must be made available by the private sector for a fair transition.

He accused the government and the prime minister of “targeting” Western Macedonia and treating it “vindictively”.

As an indication of such behavior, he cited the treatment of the University of Western Macedonia and accused the government of having “completely devalued” it and the large reduction (43%) in the number of admissions.

“We hurt Western Macedonia and we will support it, we can not throw it away,” said Mr. Tsipras.

Issues arising from the mobilization in Western Macedonia and especially in the region of Eordea were mentioned by representatives of institutions in the meeting they had with the president of SYRIZA-Progressive Alliance, Alexis Tsipras, at the town hall of Ptolemaida.

“Ptolemaida is the cornerstone in the development of Greece, but you are constantly pushing against the decision of de-ligation”, said in his speech the mayor of Eordea Panagiotis Plakentas and continued: “Western Macedonia as a whole, but especially for Eorda more than two years in the eye of the cyclone. “And from the day of the announcement of the prime minister of the country, Mr. Mitsotakis, for complete detoxification from lignite until 2028, our region is in constant turmoil”. According to the mayor, “the de-ligation is being done violently, without the necessary time being given for the planning of a new productive model”. “We do not know the main axes on which the transition plan will move. We often hear general motives in the region, but we do not have clear information about any of them, while we have stated in all possible ways how catastrophic the consequences in the region will be “, he noted and added: and I would say they prove – that the presence of lignite is necessary for the stability of the country’s energy system, because we are leading to the closure of all lignite plants in four years at most, with the sole exception of the new Ptolemaida 5 plant? ».

Also, Mr. Plakentas stated that thousands of jobs have already been lost in the region without creating new stable jobs. “We are as beggars to claim the implementation of the obvious and the promises described in the fair transition plan,” he stressed.

“It’s tragic what is happening in the region. That is, to support the country’s electricity as the interests of natural gas want “, said the president of GENOP-DEI, George Adamidis.

Other representatives of institutions expressed fears for “desertification” of the area, due to unemployment.