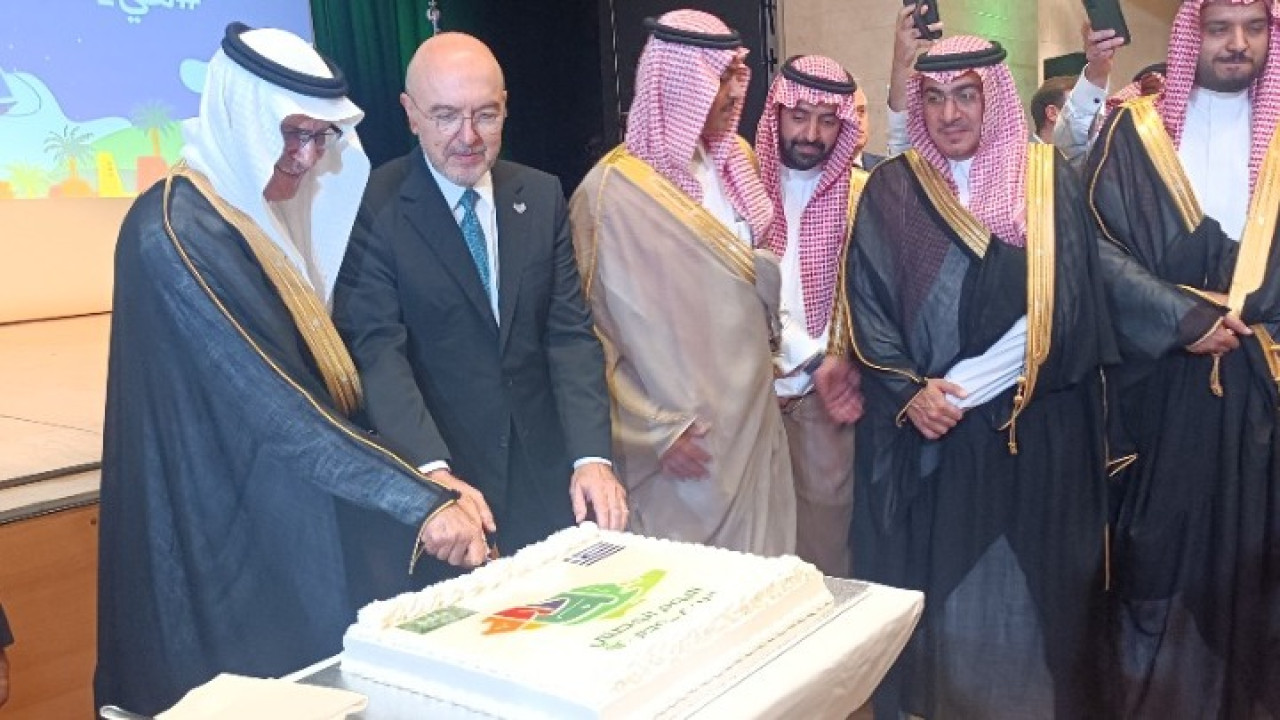 Saad Alamar: Greece-Saudi Arabia relations are at the best level, but not at the top

The ambassador of Saudi Arabia in Greece, Saad Alamar, who has assumed his current duties for 20 months, welcomed his guests from the early afternoon at the Concert Hall, where he celebrated the 92nd anniversary of the Kingdom with them.

The embassy of Saudi Arabia in Greece celebrated its national holiday tonight in Athens with a reception at the Concert Hall and with the Deputy Minister of Foreign Affairs, Costas Fragogiannis, as the honored person. The ambassador of Saudi Arabia in Greece, Saad Alamar, who has assumed his current duties for 20 months, welcomed his guests from the early afternoon at the Concert Hall, where he celebrated the 92nd anniversary of the Kingdom with them. The celebration began with the playing of the national anthems of Greece and Saudi Arabia and the greetings of the ambassador, Saad Alamar and the Deputy Minister of Foreign Affairs, Costas Fragogianni.

“Today I say with conviction that the relations between Greece and Saudi Arabia are at their best, but not at the top,” said the Saudi ambassador Dr. Saad Alammar in his greeting. Also, the Saudi Arabian ambassador to Greece expressed his firm belief in the prospects of a successful and fruitful cooperation between Saudi Arabia and Greece and underlined his full commitment to raise the already excellent bilateral relations to an even higher level in all fields ».

He made special reference to the frequent visits by the political leadership of the two countries in the last two years, with the most recent ones by Prime Minister Kyriakos Mitsotakis in Riyadh last October and by the Saudi crown prince, Mohammed Bin Salman, in Athens in July.

In particular, Saad Alamar focused on the establishment of the Greece-Saudi Arabia strategic partnership council. As he mentioned, the remarkable progress of the two countries’ cooperation led to the recent establishment of the Saudi-Greek Strategic Partnership Council, “which reflects the desire of both countries to have maximum cooperation.” In addition, he expressed pride in the remarkable progress made in cooperation in the fields of politics, economy, culture, defense, energy and many others.

In his greeting, the Deputy Minister of Foreign Affairs, Costas Fragogiannis stated that he participates in the national holiday of Saudi Arabia with great personal joy and took the opportunity to welcome the strengthening of bilateral ties. In fact, he underlined that the relationship between the two countries has become a commendable strategic partnership on many fronts in the last 3 years. Referring to his frequent visits to Saudi Arabia, he said he could not remember if he had visited other countries as many times as this country and pointed out that these contacts had already resulted in important agreements and partnerships. Characteristically, he referred to the Greece-Saudi Arabia Business Council and the agreement between the two countries for the construction of a submarine and terrestrial optical fiber data transmission cable between Europe and Asia. Besides, he highlighted the cooperation of the two countries in the fields of energy (renewable energy sources, hydrogen), culture, environment, tourism, health, science, technology, shipping, defense, logistics, agriculture and digitization.

Representatives from the political, economic and business life of the country, as well as many heads of diplomatic missions in Greece, attended the celebration. Among others, the Minister of Health Thanos Pleuris, the Deputy Minister responsible for Special Digital Projects Giorgos Stylios, the Head of Foreign Affairs of SYRIZA Giorgos Katrougalos, the Secretary General of International Economic Relations and Outreach at the Ministry of Foreign Affairs Yiannis Smyrlis and the Chief of the General Staff of National Defense attended. General Konstantinos Floros.

Facebook
Twitter
Pinterest
WhatsApp
Previous article
Brazil records 91 deaths from Covid and more than 6,000 cases of the disease
Next article
Fernanda Lima and Rodrigo Hilbert declare support for Lula on their social networks