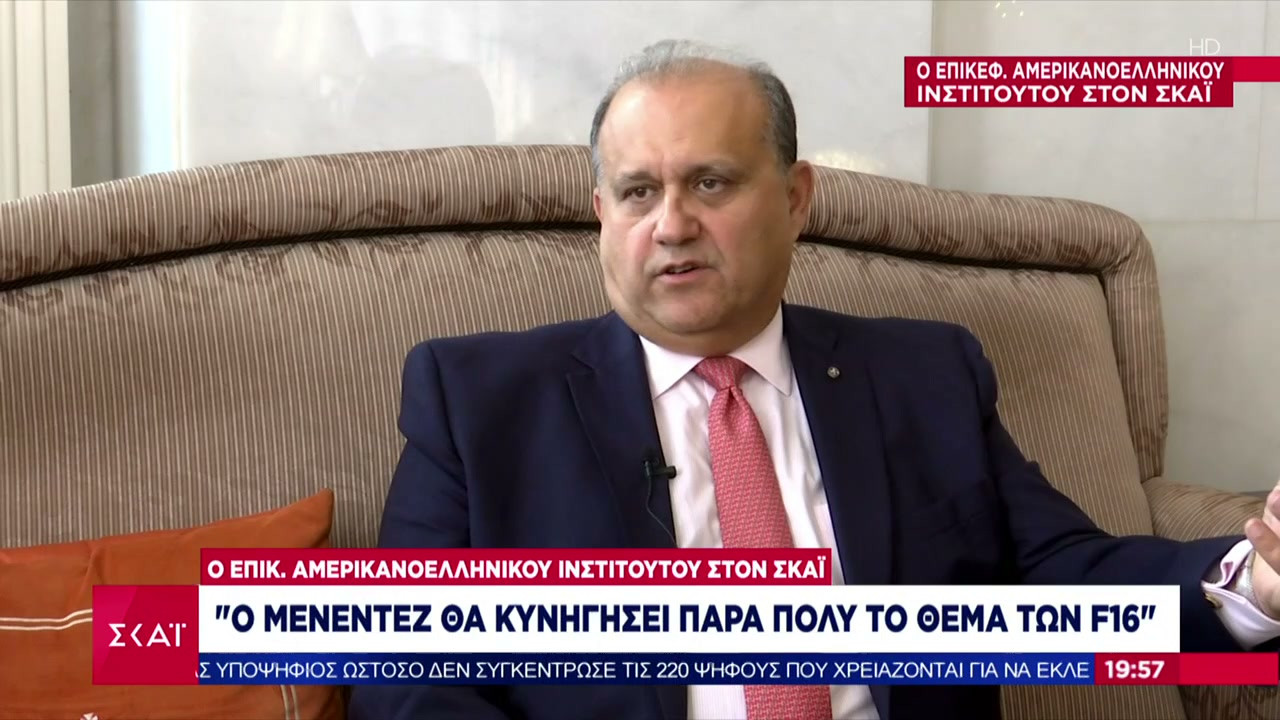 Head of the American-Hellenic Institute in SKAI: Menendez will pursue the issue of Turkish F-16s a lot

Nikos Laryngakis, who had sent a letter to American President Joe Biden requesting sanctions for the Turkish aggressive behavior, spoke to SKAI. – He referred to Senator Robert Menendez stressing that he will support the Greek positions.

THE Nikos Laryngakis, the head of the American Hellenic Institute who had sent a letter to US President Joe Biden requesting sanctions for Turkish aggressive behavior spoke to SKAI and Maria Tsilinikou. He referred to the Senator Robert Menendez stressing that he will support the Greek positions while, as he explained, there are many steps that must be taken before Turkey manages to get the F-16s.

Journalist’s Question: Following the Senate’s decision to withdraw the 2 amendments, Senator Robert Menendez stated that he would not approve any F-16 sales to Turkey. What is your comment?

Nikos Laryngakis Head of the American Hellenic Institute (AHI): Mr. Menendez, like us at the American-Hellenic Institute, what we promote is that Greece is the one that is really helping America, while Turkey is not. Turkey has 200 F-16s already more than it needs and they are violating your airspace every day. There’s not one time I’m in a captain’s office and I’m not shown these radars and one of these scenarios hasn’t happened. We want to emphasize this more. From the State Department comes the saying that we would like all sides to keep the tension down. What does it say, friend? One creates the tension, Turkey a fake member of NATO.

Journalist’s Question: On the table remains the amendment of MP Chris Pappas in the House of Representatives for the ban on the sale of F-16s to Turkey and it has the same conditions, i.e. they prohibit the Turks from using these F-16s for overflights against Greece

Nikos Laryngakis Head of the American Hellenic Institute (AHI): That’s right, Mr. Menendez did the same in the part of the Senate that had to promote it. If both pieces are not included in the final piece, it will not only go to Chris Pappas, the others in the Senate must also approve this, in the so-called conference committee.

Journalist’s Question: In the event that no amendments are finally passed, there are some other weapons in the quiver.

Nikos Laryngakis Head of the American Hellenic Institute (AHI): There are many steps to be taken before Turkey can get the F-16s. And there again, Menendez will play a big role. And that’s where Menendez has characteristically said that as long as I’m in it, it’s out of the question for Turkey to get the F-16s – I think he’s going to pursue it very much

Journalist’s Question: The representative of the Turkish Presidency, İbrahim Kalin, stated that if Turkey and the USA finally reach an agreement, they will do so under the conditions that Ankara will set. What is your comment?

Nikos Laryngakis Head of the American Hellenic Institute (AHI): Everyone can say whatever they want. They also have an election in 2023 so they are looking in every way to find a branch so they can be caught.

Journalist’s Question: In relation to the illegal Turkish-Libyan memorandum, what is your opinion?

Nikos Laryngakis Head of the American Hellenic Institute (AHI): Everyone has said that this agreement is ridiculous and unfortunately they go and do it and Mr. Erdogan provokes again with some other move. Let’s hope that the investigation will not go under Crete because it will put Greece on a red line that will necessarily have to react. Greece is a strong country, its star is rising with the USA and the West and far through Alexandroupoli.