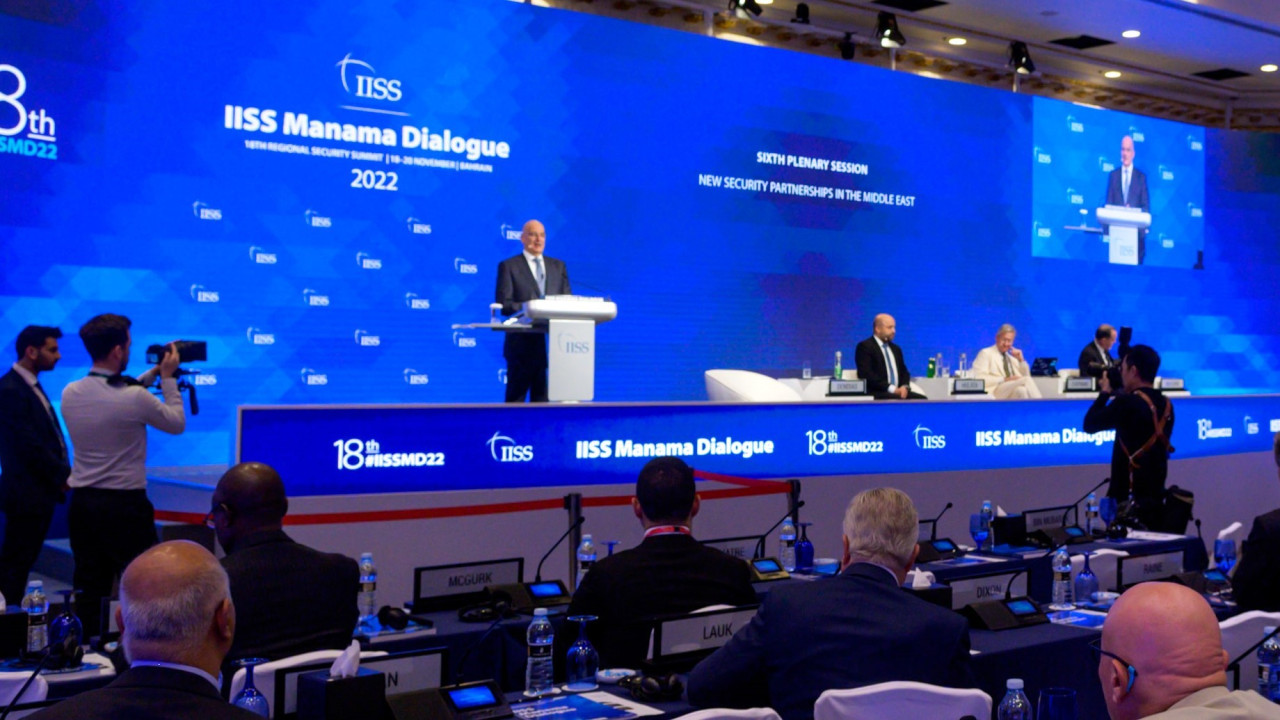 Dendias from Bahrain: Let’s not allow the narrative of revisionism to become dominant

In his speech, the Minister of Foreign Affairs, Nikos Dendias, underlined that Turkey acts as a troublemaker in the region.

“We must not allow the revisionist narrative to prevail and become dominant,” the foreign minister stressed Nikos Dendias in his intervention in “Manama Dialogue».

As he pointed out, if Ukraine’s struggle is successful, “it will not just be the victory of a country against an aggressor, it will be the defeat of the revisionist narrative.”

“If the Russian invasion was successful, what would stop the president Erdogan to imitate her or other authoritarian leaders to imitate her?”, he noted.

As he mentioned, if you look at Turkey’s budget this year, you will see an additional 30 billion, this is Turkey’s profit from not imposing sanctions on Russia. He noted that 800 Russian companies are relocating to Turkey.

He emphasized that ultimately “Turkey must join the security architecture of the Eastern Mediterranean, it is a big country and we cannot ignore its presence”. After all, he reminded, “Greece is the only country that is still clearly in favor of conditional EU membership”

“The question is whether Turkey’s policy serves this goal or not,” he emphasized and underlined that Greece is the only country in the world, a member of the EU and NATO, that faces the threat of war, a casus belli.

“How can this be happening in the 21st century?” he said.

At the same time, he noted, Turkey is demarcating maritime zones with the Tripoli government, ignoring that the islands have rights. “It is as if Greece signed a memorandum with Tunisia, ignoring the existence of Malta and Sicily.”

The foreign minister noted that Libya also acts as a troublemaker in two ways, “signing illegal agreements with Turkey, creating possible problems with Greece and spreading weapons in the Sahel, where we see a situation that is getting out of control.”

Referring to the region’s other problems, he said that “the Western world, the values-oriented society, has no policy to deal with the situation in Syria.” “Practically we do nothing”, he pointed out.

But Iran also pointed out that it is a very difficult situation and often plays the role of the rioter.

But he stressed, there are also positive examples: The Abraham Accords completely changed the narrative, not just for the Middle East, but for the entire region.

“Israel is willing to work with Arab countries and create a new reality on the ground,” he pointed out.

Also, the demarcation agreement between Israel and Lebanon. “We are seeing something quite unique. An agreement between two countries that do not recognize each other and find a way to resolve an open issue, but also to apply international law and the international law of the sea to resolve it, accepting that the world is a society based on rules and setting an example for the world.”

A third example, as he pointed out, is the agreement between Greece and Egypt that has been under negotiation for about 30 years.

“It is not just a bilateral agreement on the demarcation of maritime zones, it is a connecting lane between Africa and Europe, which could be used for interconnections and pipelines,” he pointed out.

“It is the perfect example of how based on international law and the international law of the sea, countries could resolve issues through dialogue, not just for their own citizens, but for a much larger region.”

As Mr. Dendias emphasized, the region’s problems are solvable. “If we have rules and if we have good will, all the problems we face today, or at least most of them, are solvable. We must not give up hope that we can create a better world. We must not allow despair to cover our region.”

He noted that Greece sees itself as an entry point to the Balkans, Central Europe and the support of the Ukrainian effort. The port of Alexandroupolis is the main port used by NATO to support Ukraine.

Greece also aims to become an energy hub, to transfer energy from the Arab world, from Africa to Europe. He also reminded that there is a lot of infrastructure being built today in Greece to deal with the energy challenge facing Europe.

Finally, at the cultural level, at the level of identity, Greece is “qualified due to its geographical position and history to better understand the Arab world” and to become a “cultural point of intersection”.