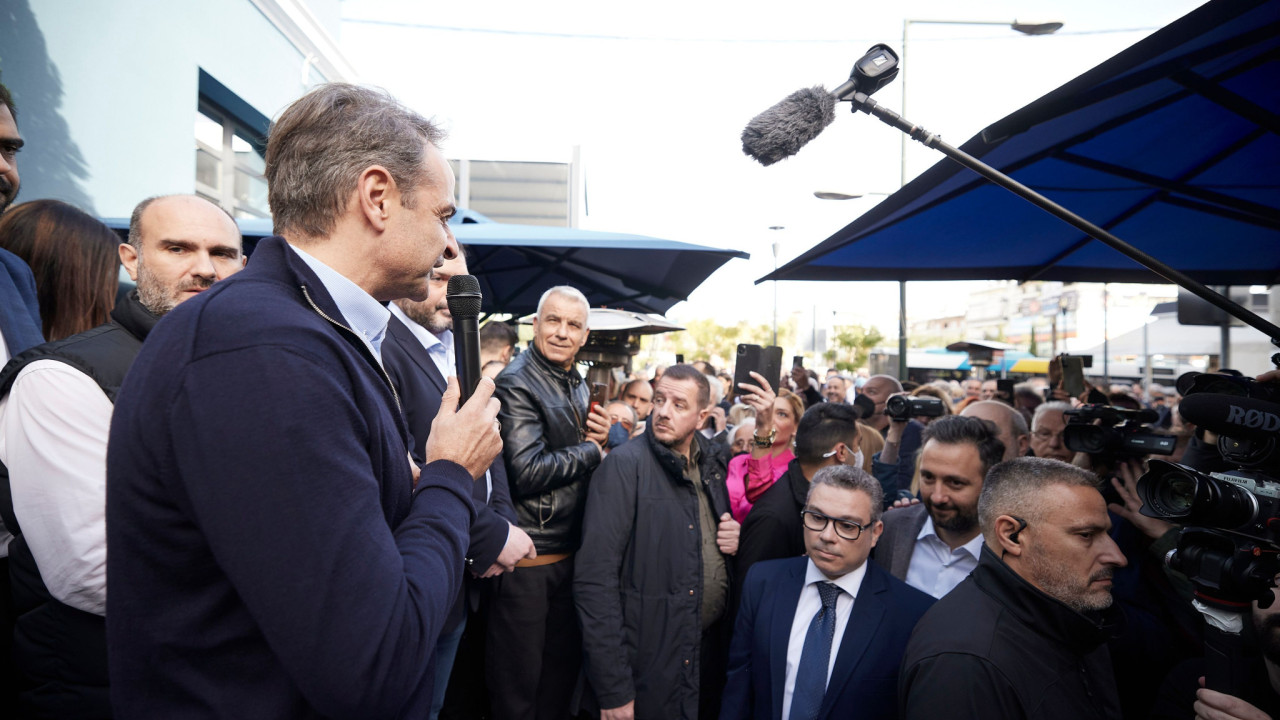 Mitsotakis: The bet of the second four-year period will be better wages

If in the first four years the bet was the lowest taxes, the bet in the second four years will be the best wages, the Prime Minister emphasized during his visit to Korydallos – The prisons will be gone, the space will be used for the benefit of the local community

In the morning, Prime Minister Kyriakos Mitsotakis visited the Municipality of Korydallos, who started his visit from the Digital Education Center of the Municipality and then walked through the main streets of the city and talked with residents and shopkeepers.

“The concern of this government, our meaning, will always be our fellow citizens who are most in need. As long as the economy is growing, this government will not hesitate to use this growth dividend to support our fellow citizens who are currently struggling. We are faced with an imported accuracy crisis, but we are doing everything we can to ease the impact on households”, said Kyriakos Mitsotakis.

The Prime Minister focused on the economic initiatives undertaken by the government: “From this month, for the first time in 12 years, pensioners will see an increase in their pensions. The most up to 8%. Those who have a personal difference – it is an issue that concerns us – this personal difference will be reduced with each increase in pensions, but those who have a personal difference will see a benefit from the abolition of the solidarity levy. Another memorial tax, which is now abolished for everyone. Not just private employees, civil servants and pensioners. From February, the “Market Pass” will be implemented. We will give you the possibility to return up to 10% for the purchases you make in the supermarket. With income criteria that will cover, I believe, all and sundry, but also with an intervention of the state very important in order to effectively absorb the entire impact of inflation on the household basket. From April 1, we will have the new big increase in the minimum wage,” Mr. Mitsotakis emphasized, adding that “if the first four-year bet was lower taxes and you already know that we all pay lower taxes, the second four-year bet will be the best salaries for every Greek woman, for every Greek man, primarily for the young children who are now entering the labor market”.

Kyriakos Mitsotakis: The prisons will leave Korydallos, the space will be used for the benefit of the local community

The Prime Minister placed special emphasis on the issues of local interest and the development challenge for the municipality of Korydallos: “Do you remember when I visited you before the completion of the metro project and at the inauguration of this very important project and I told you then how much your life will change and how much all of Korydallos will change with this important infrastructure project. I am happy today to be here and see a lively market, despite the difficulties that exist and see optimism and smiles. We have achieved a lot and will achieve even more in the second four-year period.

Kyriakos Mitsotakis also referred to the cooperation between the government and the municipal authority: “I want to highlight the cooperation we have with the Mayor and the Municipal Authority. Very serious work has been done here in Korydallos. I recently had the opportunity to visit a training and skills center where I saw your fellow citizens, who are choosing today in a phase of their lives that may not be self-evident to do so, to become familiar with digital technology and computers and to take advantage of the great digital revolution that this government has put into practice. gov.gr has made your life easier and everyone should be able to access these services”.

Regarding the project of relocating the Korydallos prisons, Kyriakos Mitsotakis stated that “I discussed with the Mayor the great development challenge for the Municipality of Korydallos, which is none other than the relocation of the Korydallos prisons. You remember that I had committed in my program statements that this project will be implemented. The truth is that it tired us, taught us, but I am now absolutely certain that we will implement, in the second four-year period, this commitment of ours. Space has been found, financial tools are available, the prisons will leave Korydallos and we will discuss together with the local community what we should do and how we should utilize this very important space which will be released for the benefit of the local community, for the benefit of the local economy”.

Courses at the Digital Education Center, for adults over 55 years old

The Prime Minister started his visit to Korydallos from the Municipality’s Digital Education Center, an initiative of the Ministry of Digital Governance in collaboration with the Municipality of Korydallos, which opened its doors in 2022. The center functions as a training hub with the aim of combating digital illiteracy and provides free courses in the field of IT and consulting, with a multitude of more specialized subcategories while the courses are delivered to adults over 55 years of age. “I am especially happy when I see people who, at this stage of their lives, choose to train in a new subject. It’s a very important decision not only because we all need to familiarize ourselves with our contact with the digital world but also because it shows a willingness to keep learning”, noted the Prime Minister during his conversation with citizens participating in the digital courses from the Digital Education Center .

“We have made a revolution with gov.gr and we want everyone to be able to take advantage of it and not have to, as I said, go to the children and grandchildren in order to process any case they may have either with the state , either with banks or with mobile phone companies”, said Kyriakos Mitsotakis to add that “we have found that we can do everything digitally, but we have to do it digitally and securely. And that’s why this program is so important. You are a pilot and I think that, seeing the success, I will also discuss with the Ministry its very rapid expansion to other municipalities. This is also the purpose of the pilot programs, to test them, to improve them”, he emphasized, adding that “the municipality has done an excellent job and if someone wants to use the new government services, a basic familiarity must be had”. The Prime Minister was welcomed and given a tour of the site by the mayor of Korydallos, Nikos Khoursalas, and the manager of the center, Elpida Kontopodi.

The Prime Minister was accompanied during his visit by the MPs of Piraeus II of the ND, DImitris Markopoulos and Yiannis Tragakis, the Member of Parliament for Piraeus and Islands of the ND, Yiannis Melas, the Secretary of the Political Committee of the ND, Pavlos Marinakis, the Secretary of Organization and Director of the Office of the President of the ND, Stelios Kontadakis and the Regional Governor of Attica Giorgos Patoulis .

Facebook
Twitter
Pinterest
WhatsApp
Previous article
Brazilian sets record run on Mount Vinson, Antarctica
Next article
The death of the 50-year-old in Moschato is due to hanging – He had broken ribs from a beating