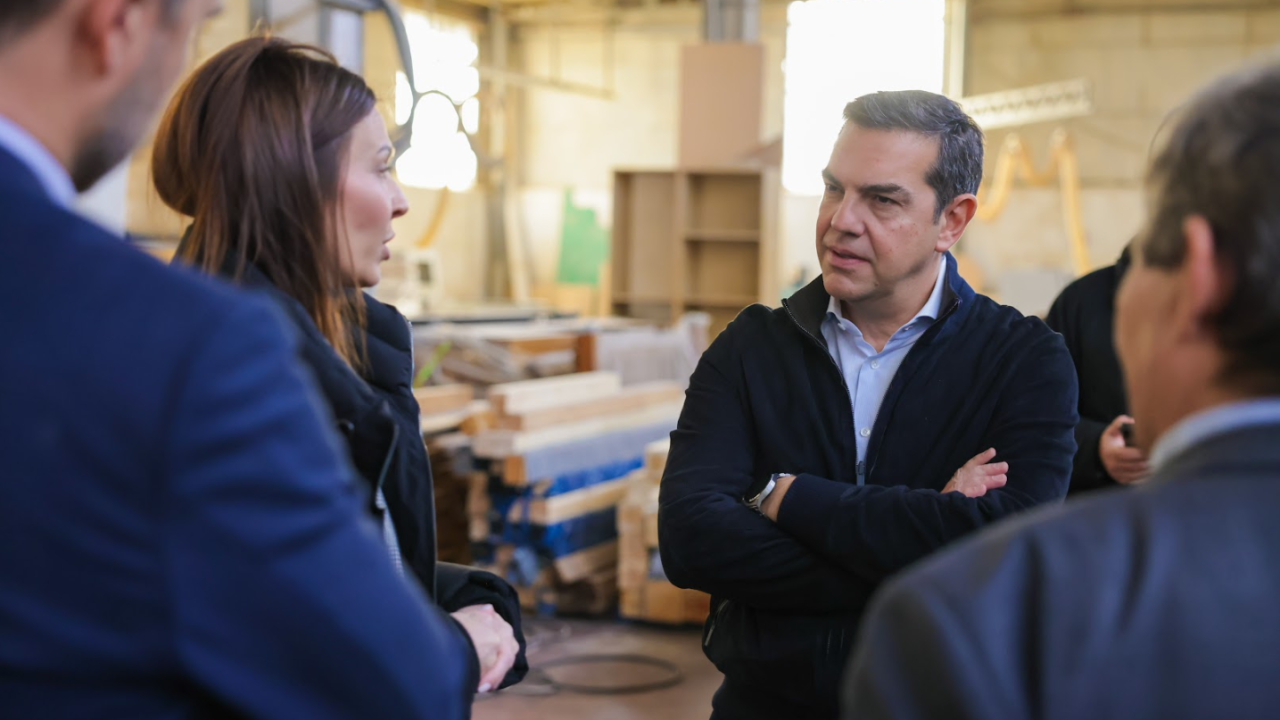 Tsipras in a craft industry in Egaleo: Put an end to profiteering

Let the worker and small and medium enterprises breathe, said the president of SYRIZA during his visit to a family craft in Aegaleo

The President of SYRIZA – PS Alexis Tsipras visited today in Aegaleo a family craft and had the opportunity to talk with the owners and workers about the current situation in the real economy. For business owners, the issue of high energy costs is crucial, especially for an electricity-intensive business, as is the difficult access to financing tools and bank lending. For workers, punctuality pays off the paycheck before the month is even over.

“With half the production, we pay twice as much electricity”

As the owners of the craft industry explained, energy costs combined with increases in raw materials bring businesses to their knees. They reported that for a period the energy cost had tripled but even now after the subsidies it is extremely high. To the comment of the president of SYRIZA – PS that PPC has acquired a partner in the industry, the owner replied that “don’t discuss it because we are an electricity company. From 7 thousand euros that was the electricity, we now pay 20,000 euros! There is a subsidy but it is not enough, it has doubled” and this, as they mentioned, at a time when production has halved.

The other huge problem faced by small and medium enterprises in particular is the lack of financing tools and the attitude of the banks. “The bank, in order to finance you, and let’s note that we have a very good cooperation, will first tie your feet, then your hands, and then give you money. That’s why we try to be debt free. With zero borrowing” noted the owner of the craft industry.

For his part, Mr. Tsipras emphasized that “when we talk about healthy entrepreneurship, we cannot only talk about a few large business groups” and noted that “the whole perception that prevails today in the government and in many municipalities is the accumulation of projects in large projects to go to large business groups. The small and medium-sized business is in great difficulty, obviously because of the accuracy and energy costs, but also because all the projects accumulate in the big ones and the small and medium-sized business is forced to become a subcontractor of the big ones in order to make a piece of bread”. In response to Al. Tsipras “what is the most important issue that you would like us to highlight?”, the answer was “greater flexibility in the programs of the state towards the local self-government and that the projects be divided into more and smaller projects” with Mr. Tsipras reminding the “FiloDimos” program of the SYRIZA government.

Mr. Tsipras referred to comparative initiatives that must be taken. “The issue is how other businesses will be given motivation and opportunities to flourish, especially businesses like yours that flourished in this critical period so they don’t close down, don’t languish. It is not only the energy cost, because there are other factors that create difficulties” noted Mr. Tsipras and added “one is the financial tools, the possibility to grant projects through the local government, the Recovery Fund which is a big deal, very big opportunity for the country. Unfortunately, however, we see them closing deals with large business groups. A big issue is also the question of taxation, the issue of the end of pretense, interventions that can breathe life into businesses. To endure”.

Afterwards, Mr. Tsipras spoke with an employee of the company, who categorically told him that “the month is not coming out. We have a good job and we don’t have enough money at the end of the month”, with Mr. Tsipras noting that “the purchasing power has decreased by 40% for incomes up to 750 euros per month” and emphasizing the need for a “simultaneous increase in wages and decompression of inflation”. For the household basket, the worker remarked that “it has not offered anything” and Tsipras added that “they are reducing the packaging to show that the prices remain the same. While you see the prices going up, some are making billions from it.” “On our backs” noted the worker.

Mr. Tsipras also added that “of course inflation is something that followed the pandemic, but in Greece we are champions in accuracy in electricity, fuel, supermarkets” and he also referred to the huge producer-consumer price difference. “They are on average 300%, because there is no control,” said Mr. Tsipras characteristically. “Power companies and refineries have billions of surplus on their balance sheets, so do supermarkets. That is why there must be justice. Let there be an end to the filthy lucre, let the worker and small and medium enterprises breathe”.