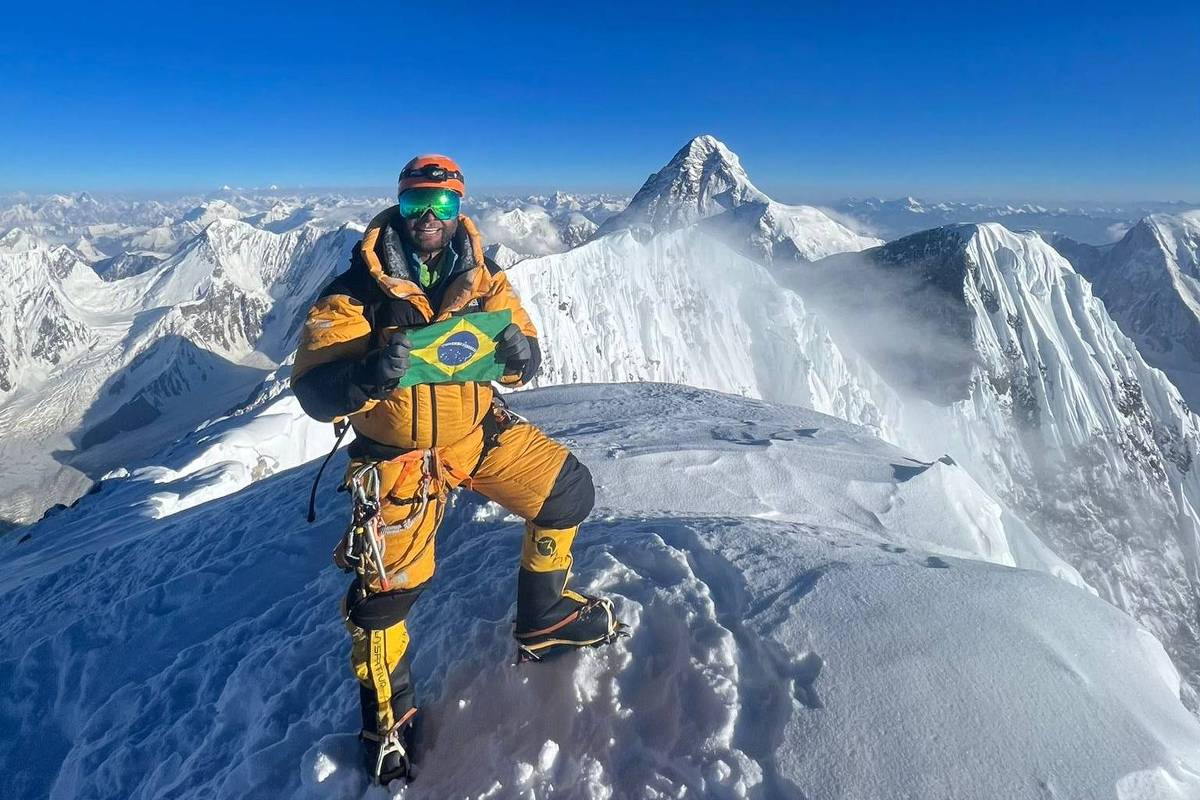 Last July 15th, the blog published an interview with Moeses Fiamoncini, 42, from Paraná, who was getting ready to fulfill one of the 14 goals he had set himself: to climb the 14 mountains of the planet above 8,000 meters, all located in the mountain range that permeates Nepal, Pakistan and China. But the summit in front of him, Broad Peak, in Pakistan, with its 8,051 meters, was very special: he would be the first Brazilian to carry the flag of our country to that mountain. And so it was done. On the 25th of that month, without the help of porters and without oxygen support, known to be rarefied at those altitudes.

And it was to check the feat and the progress of his challenge that Fiamoncini sent, between one camp and another, and always with great difficulty accessing the internet, a little of what this unprecedented climb was.

What was it like to be the first Brazilian to reach the summit of Broad Peak? It was beyond special. Reaching the summit of an 8,000-meter mountain, without the use of oxygen, is always a great accomplishment, no matter how many ascents of the genre you’ve done before. And, as we Brazilians will always love our flag, it was exciting to take it up, it was a victory for Brazil.

What were the main difficulties you faced on this climb? Broad Peak, although it has a lower altitude than its neighbor K2, which is 8,611 meters, can be as difficult as it, which I had already climbed in 2019. This year, an intense heat wave hit much of the northern hemisphere and left the mountains even more dangerous. Higher-than-normal temperatures make blocks of ice and rocks to come off more easily. There were several accidents and unfortunately some were fatal. To minimize risks, the strategy I chose was to climb to the high fields at night, when temperatures are lower, and rest during the day.

Even so, there was a more serious factor that complicated the ascents to Broad Peak this season. Generally, companies that organize expeditions are responsible for installing fixed ropes in the mountains, which makes a lot of difference and increases safety when climbing. This year, a very experienced European company was hired for this service, but just before the summit, there is a ridge that requires a lot of attention to be passed, it’s called Rock Summit. A Pakistani who was working with the group fell from that spot and disappeared into an abyss more than 2,500 meters deep. As the mountain is on the border between Pakistan and China, and he fell on the Chinese side, a helicopter was called, but the body was not found.

This incident caused the group to abandon the work, leaving precisely the most technical and dangerous part of the mountain without fixed ropes. That was one of the reasons that stopped many people from reaching the summit of Broad Peak this season. Some gave up, others tried and failed to pass the last part, which is really dangerous and is just under 200 meters from the summit. To make matters worse, there was another fatal accident with an Englishman, at this very spot, the day before my arrival at the summit. Like the Pakistani, he too fell from Rock Summit, but the 1500+ meter drop went to the Pakistan side, and we all saw it from Camp 3.

What is it like to watch such a scene and imagine yourself going up the same path in a little while? When you witness something like this, you need an absurd focus so you don’t give up on what you’re doing. Although I was climbing Broad Peak without the help of porters, on the night of the summit attack I climbed next to a group of 4 people with 3 different nationalities. Despite the decline of English, we decided to go up and see with our own eyes what this part of Rock Summit would look like. When we arrived at this location we were fine and with energy to keep our attention, so we decided to continue and, luckily, everything went well.

After Broad Peak you went to other mountains, didn’t you? Yes, I went to climb Gasherbrum 2 (8,035m), called G2, which was a quick climb, because the weather forecast only signaled 5 days in a row of good weather and, if I missed this opportunity, it could be the last window of the season. . So, after summiting Broad Peak, I rested one day at base camp and the next day hiked 10 hours to G2 base camp. Arriving there, I learned that there were 7 other people (of different nationalities) who would start climbing the next day. I joined the group, which helped a lot, as I shared the tents with them in the high fields, allowing me to go up with my backpack a little lighter.

Broad Peak and G2 are some of the lowest mountains of the 14 at 8,000 meters, which you might think are easier. I thought so myself, but I arrived in Pakistan knowing that it wouldn’t be that simple. Both Broad Peak and G2 are very difficult mountains, or at least they were more difficult this season, due to the weather conditions. There were weeks of blizzards interspersed with weeks of high temperatures, not typical even for summer in the region. This combination of a lot of snow and hot days is terrible.

Between the base camp of G2 and its camp 1, we need to cross a 12 km long glacier, which is extremely dangerous. It took 11 hours walking in the middle of ice walls with abysmal craters and without fixed ropes, as almost all the previously fixed ropes had already been buried by snow or torn off by avalanches. We decided to use the same strategy as Broad Peak, advancing at night and resting during the day, to lessen the chance of being hit by ice floes that come off in the heat of the sun.

Between Camp 1 and Camp 2, we climbed a part called Banana Ridge, a super steep ice wall 500 meters high. We climbed in 8 hours and arrived at field 2. The following night, we went up to field 3 and in this stretch there are frequent avalanches. We were hit by a first avalanche, which did no damage, but broke the fixed ropes. Soon, another avalanche passed close to us and hit a Mexican who was very close to me. He was buried up to his neck and I dug him up. It was another scare, and bigger. It took us 7 hours to get to camp 3, a difficult hike because the snow was deep.

The following night, at 7 pm, we left Camp 3, which is at an altitude of 7,000 meters. It is a complex path because there is a difficult crossing, where we walk for 6 hours in deep snow, keeping ourselves at the same altitude. Also, the weather closed that day, so besides there being no fixed ropes, we couldn’t see well. It took us 15 hours to reach the summit and, despite the realization we felt, we knew that going down would not be simple either. As we made the crossing to descend again, we were caught by an avalanche that dragged us for 30 meters. It felt like floating on a wave. Anyway, we were lucky. If it had been a more intense avalanche, it could have dragged us into an abyss 3000 meters deep.

You mean the G2 was worse than Broad Peak? I can say that Gasherbrum 2 was the most dangerous mountain I’ve climbed so far. I didn’t think I’d say that after I’d already tried to climb the dangerous Annapurna twice, but this one managed to overcome it. It was a relief to be back at base camp. It was a great joy to reach the summit and an even greater joy to make it back, safe and sound, to base camp.

How is your preparation and acclimatization to do so many climbs without oxygen and carrying all the equipment yourself? The acclimatization strategy for mountains of 8 thousand meters of altitude can happen in different ways, especially for those who climb without oxygen, as in my case. Each climber will adopt the strategy that is most convenient for him. As 8,000-meter mountains are not usually the easiest and safest (and acclimatizing is a process that involves going up part of the mountain and down sometimes), being able to acclimate to safer mountains is ideal. But this ideal is not always possible, for several reasons.

This time, before going to Pakistan, I went to acclimatize in Bolivia. I made some mountains with more than 6 thousand meters of altitude and I reached 6.500 meters, in the Sajama volcano. It was enough for me to do just one acclimatization rotation on Broad Peak, when what is needed for non-acclimatized arrivals is 3 rotations.

As for the physical preparation to climb mountains, I maintain it, basically… climbing mountains. When I’m not on 8k mountains, I’m on smaller mountains with trekking groups. It always keeps me prepared. In the few periods when I’m not in the mountains, I do support exercises (push ups) and ride a bike.

Anyway, what counts most for climbing this type of mountain is psychological preparation. I observe that although they are super difficult mountains, there are people who arrive with little physical and technical preparation trying to reach 8 thousand. There is always. But what most prevents mountaineers from reaching the summit is psychological. It’s not easy to handle everything that involves an expedition to these mountains and stay focused. A detail, too, is that the experience will strengthen you. A person has already died in my arms on an 8,000 meter mountain, I have seen bodies, I have seen people injured. I’ve lost great friends, I’ve seen endless avalanches. I’ve been on a total of 11 expeditions to mountains over 8,000 meters, so I can say that with each one I got stronger.

Do you ever think about returning to Brazil? In October I have a group to take to Everest base camp. Only in November I return to Brazil for 10 days and then I go to Ecuador, where I have a group booked and then a private client. At the end of December, I take a group to Kilimanjaro. And for 2023 the agenda remains the same: mountains of 8 thousand between trekking groups and clients.

That is: apparently, we will continue to know about Moeses Fiamoncini for his rare satellite interviews and Instagram records.

Facebook
Twitter
Pinterest
WhatsApp
Previous articleRussia threatens again: “We will use nukes if necessary for Donbass,” says Medvedev
Next articleYou can be stylish even if you work out – Find what suits you and what is the ideal outfit