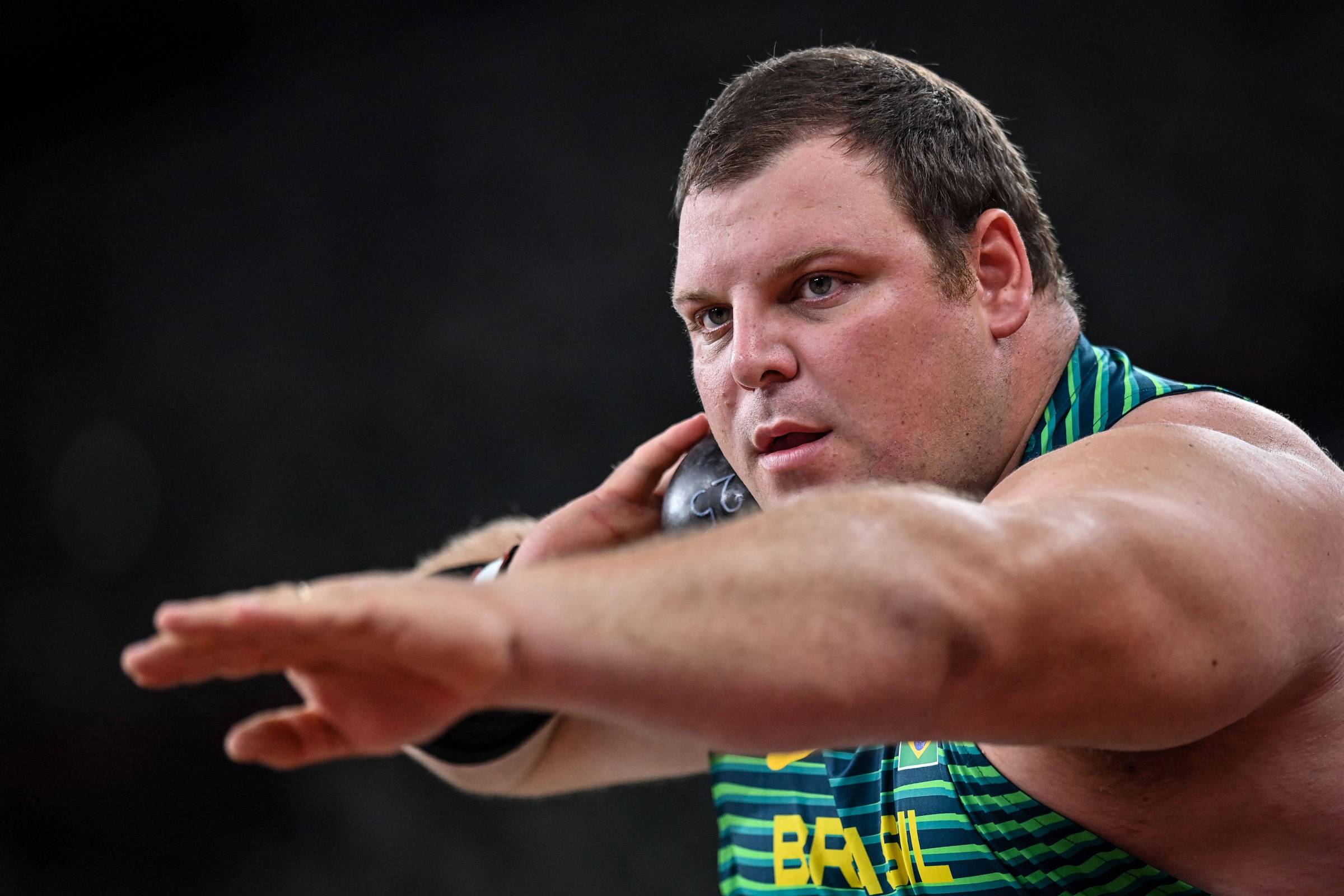 It is in the constant and sometimes long plane trips that Darlan Romani, 31, thinks most about life. He likes to look out the window because, he believes, it’s the moment when he gets the real perspective on things.

“Man, you’re over there flying above the clouds…”, he rambles.

He imagines the size of the world and how many people there are in it. This is to put things in perspective.

“I keep looking and say: I was the fourth in the world. Look at the size of that! We have no dimension sometimes of what a result like this represents. I’m not satisfied. I want to go further and always get the medal. But I like to think about these things because the people who point the finger are the same people who don’t stop to observe a detail like that”, he says.

The 22.53 he shot in Belgardo would give him gold in Rio and is the same mark as in the 2019 World Cup, when he was fourth again.

“Everything is a matter of circumstance. Of the moment”, he adds.

When witnessing the Brazilian’s victory in Serbia, American Ryan Crouse, two-time Olympic champion, took to social media to congratulate the winner and emphasize that “most people don’t realize how hard this guy has been working”.

Almost as cool as the feeling you get when parents tell you they have a son or daughter who wants to play sports because of you. Including children in sports has been a social mission for the athlete since he and his wife Sara passed through a square in Bragança Paulista (São Paulo countryside), where they live, and decided to use that space to offer children the chance to start in athletics. .

He took the project to schools in the region and, in partnership with Sesc (Social Service for Commerce), to other cities in the state. Last Friday (23), he was in Osasco, in greater São Paulo, for the Atletismo na Rua program. He left home early, loaded all the equipment into a van and drove the 120 km that separate the two cities.

She spent the day following the activities with her daughter Alice, 7. She is the one who tests all the devices because she can’t stay still for a second.

“What’s up, daughter? Was it all right?”, asks Darlan.

If she signals yes, then it’s all right. Soon after, she whispers in her father’s ear if he can buy new skates. She promises that she will use them. That’s when she’s not in riding lessons.

Romani recalls that, because of the sport and the search for medals, he has already missed several family events. When he won the Worlds, it was to Alice and Sara that he dedicated the achievement. She is the wife who carries out the couple’s social projects, because he needs to train. In 2023, his priority will be a new World Cup, but the ultimate dream is the Paris Games in 2024. Because of the pandemic, which postponed the Tokyo Olympics to 2021, it will be the shortest Olympic cycle in history.

“For me, the responsibility has increased because I want more. I charge myself a lot. Like it or not, I’ve given up a lot, I’ve spent my daughter’s birthday far away. I’ve lost I don’t know how many wedding anniversaries…”, he recalls.

After fourth place in Tokyo, a video of Romani training in a field near her home, in precarious conditions, went viral on social media. That was used as an example of the difficulties faced by Brazilian Olympic athletes and the sacrifices they make. A kitty was started to help him.

He acknowledges that the episode conveyed the wrong image. Because of the pandemic and everything being closed, he practiced as best he could. His coach, Justo Navarro, was in Cuba and couldn’t board to Brazil. The video was not victimhood. It was a demonstration that Darlan Romani, despite all the difficulties, was moving forward in his dream.

“Each one thinks and says what they want, right? Those were the circumstances I had to train. [A vaquinha] it was something the population did, not me. I told Sara I didn’t want to. But she told me that people wanted to participate in my cycle and give me a gift. I replied that if so, yes, but I don’t like those things. Anyone who knows my life knows that I am a family guy, who likes to talk and the population identifies with that”, he believes.

Approximately R$300,000 was raised and a good part of the money was used in social projects that he believes represent his future in the sport. The couple planned to create a foundation, but they took over the ABRA (Bragantina Athletics Association). Ahead of it, they intend to raise funds to expand the work through the Sports Incentive Law.

Among all the training, results and plane trips, what Darlan Romani imagines is how rewarding it is to discover that children and teenagers who participate in athletics classes are able to change their behavior in a short time because of the sport.

“Schools give us feedback from students who were problematic and start to sit in the front rows. To participate in the project, you need to have good grades. a lot of us.”

And in the lectures he gives to the students, Darlan remembers that, because of the sport, he has known the world and traveled to places he never imagined. The same can happen to those children through athletics. Perhaps through the window of the plane, they can also think about the same things that the greatest Brazilian athlete in the shot put thinks.