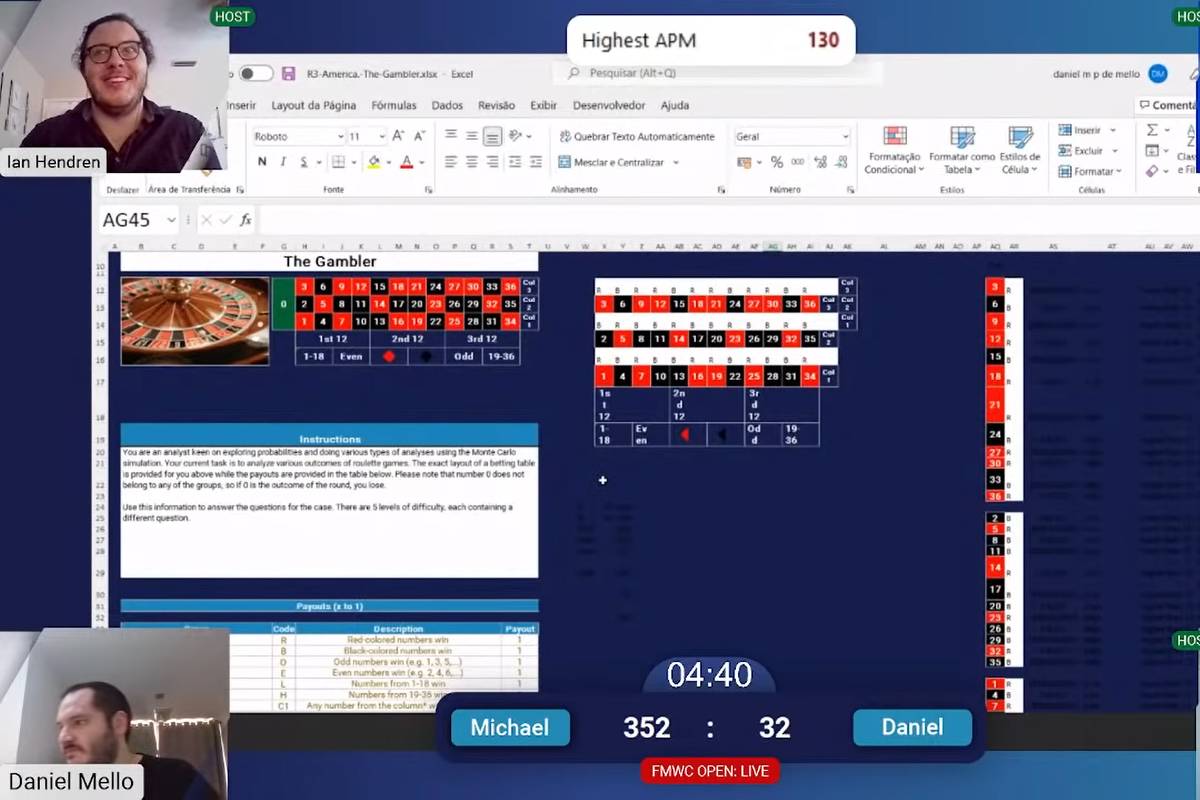 How about turning on the TV on a sports channel and watching a person using Microsoft Excel? Yes, the same one of the tables on the computer – and with the right commentators evaluating the calculations made.

An esports modality (electronic sport) with the spreadsheet program appeared last year after being broadcast on American ESPN. It hit Brazil in August, when streamer Casimiro watched a friendly broadcast on his channel.

The “Microsoft Excel World Championship” is a tournament aimed exclusively at the computer program, which, let’s face it, is not known for being very exciting.

Now, the second edition of the competition, which started on October 8, is approaching the final: it will be next Saturday (12).

If, like Casimiro, you didn’t understand anything, this text is for you.

Starting with the basics: Excel has been around since the 1980s, going through updates over time. It allows you to organize data into tables and perform operations with that information – from the simplest, like adding values, to more complex things, like joining different tables or reorganizing the records to draw some conclusion.

A table noting information about each game of a football championship can be rearranged to extract who was the top scorer of the competition, for example, in a considerably simple operation.

To use Excel in an esport, several tasks of this type are created, and they work as a kind of question and answer game.

There is no limit. As long as the answer is obtained within Excel, how the competitor arrives at the result does not matter. Score who gets it right, with more difficult questions worth more points.

There is also no middle ground: no receiving a partial score for reaching a value close to the expected result. If you get it right, you get the points. If you make a mistake, no. In addition, the time taken to answer the questions only serves as a tie-breaking criterion.

What is Microsoft Excel?

Excel is a popular computer program designed to handle spreadsheets. The information is divided into:

As the name of the organizer indicates, the first tournaments were aimed at the financial market. The competition, still active, is considered the regular season of the FMWC, with rounds throughout the year.

In it, at each round the competitors have to answer batteries of questions about three “tasks”, two related to the financial market and one about other subjects. Each task is therefore a big problem to be solved, subdivided into a series of questions.

To participate, it is necessary to pay a fee of US$ 20 (R$ 101) per round or purchase a promotional package of US$ 125 dollars (R$ 629) for the entire season. Registration is done on the organizer’s website.

The idea grew, and using these questions that do not require knowledge of finance, the world championship was born, originally called “Excel Open”. The format has been adapted to make the experience more televisable. It has become a knockout, and the number of tasks varies between one and two.

To enter the Worlds, competitors must pay an entry fee of up to U$50 (R$252). Participants enter a preliminary stage, not broadcast to the public, so that 128 competitors remain – made up of 100 of the qualifiers and guests.

In championships, participants have a window of time (the shortest, in the knockout, is half an hour) to complete the battery of problems.

Questions are not normally chained. In other words, to answer question 9 it is not necessary to have done from 1 to 8. With this, planners can – and should – manage which ones to prioritize, which is part of the challenge.

How Excel is used in competitions

Competitors need to solve tasks, name given to sets of questions solved using Excel. Each round has one or two different tasks, with questions that assess logic and program skill.

They are based on information provided by the organizers, such as a table showing every goal scored in a football championship game by game.

In this example, a question might be “who was the top scorer in the competition?” or “how many goals were scored by teams playing at home?”

The tie-breaking criteria are:

“I was never able to resolve all the issues,” says Daniel Mello, 36, a competitor in the sport. “I pick and choose, and if I’m taking too long on one, I move on to the next, something a lot like taking a test.”

Mello was the best Brazilian at last year’s World Cup when he reached the third stage of the knockout stage, just before the round of 16, that is, he was among the top 32. He also competes in the FMWC regular season and, at the time of writing, was the runner-up in the country, 107th overall with 421 competitors.

This year, Mello didn’t get past the qualifying stage of the World Cup, which he rated as more difficult. There were more than 500 participants – last year’s numbers were not disclosed.

Only one Brazilian managed to get a place among the 128 this year, Thomas Silva, but he lost in his debut.

All steps are done remotely. In broadcasts, participants share their computer screens and the webcam image.

In the image, from the round of 16 of the 2021 championship, Brazilian Daniel Mello solves questions about the results of a roulette wheel.

While fame and fortune are not very realistic goals when becoming an Excel athlete, learning techniques and gaining confidence using the tool are more plausible outcomes.

“The Excel championship makes sense even for those who compete. It’s different from a Counter-Strike, which even those who don’t know can see and appreciate”, evaluates Daniel Mello. “It’s a fun way to learn.”

He says he has been working with spreadsheets for years and his experience in esports helps him feel more comfortable that he will deal with adverse situations in the profession.

The past participating in other esports tournaments, such as Quake and Overwatch, helps by bringing techniques to stay focused.

In the end, it’s a mixture of taking an entrance exam and competing in a game.

“On competition days, I try to have an early lunch, drink water, avoid eating heavy things the day before, avoid social media and distractions. I also warn family and friends not to get distracted and leave my cell phone away”, says Mello.

According to Andrew Grigolyunovich, founder of FMWC, there are plans to expand the Excel championship. The company negotiates more exhibitions of the tournament with the American ESPN, in addition to trying to bring the sport to TV in other countries.

For now, there are no plans to show it on Brazilian TV, but it is possible to watch the games live on the FMWC YouTube channel.

“Our first in-person event will be in November, with the Excel Student Challenge final being held in Arizona,” says Grigolyunovich. “As the sport grows, we can definitely do in-person finals in a place like Las Vegas next year,” he says.

There is also the idea of ​​creating affiliates in different countries to hold local Excel competitions. Today, there is little participation of competitors from Latin American and African countries.

Facebook
Twitter
Pinterest
WhatsApp
Previous article
Ioannina: “From Rapture to Return” – Opening of the exhibition with stolen images
Next article
Brazil grants an average of 1 visa per day to digital nomads

‘Everyone saw the lack Neymar made’, says Richarlison