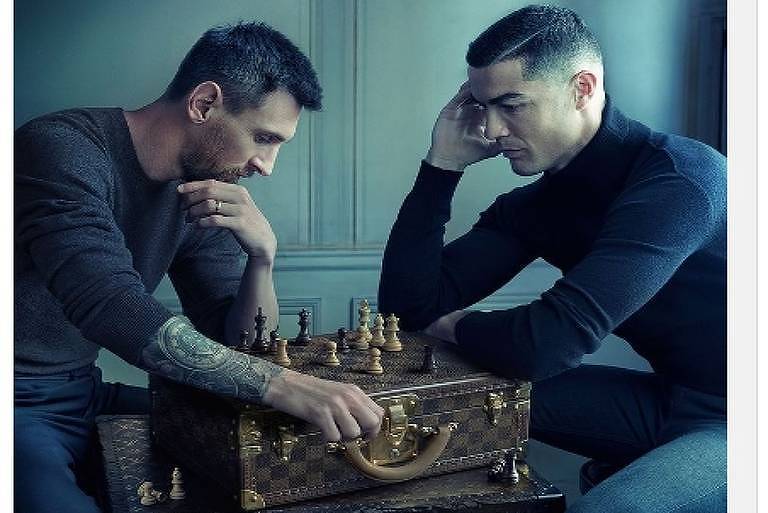 In a rare moment in their careers, Cristiano Ronaldo and Lionel Messi, two of the greatest stars of this century and the main highlights of their countries at the World Cup in Qatar, were clicked together off the pitch.

In an advertisement for the French brand Louis Vuitton, the Portuguese and the Argentine appear pensive, playing a game of chess on a board drawn on a suitcase.

By the positioning of the pieces, Cristiano Ronaldo seems to play with the white ones, and Messi with the black ones.

Also on a social network, Louis Vuitton explained, citing its “long tradition in manufacturing trunks for the most coveted sporting trophies in the world” that the image, made by photographer Annie Leibovitz, is a tribute to “two of the most talented football players of the present”.

Due to their age, the World Cup in Qatar should be the last for both Cristiano Ronaldo, 37, and Messi, 35. The two, who together have won 12 awards for best player in the world (Argentine seven times, Portuguese five) attempt an unprecedented achievement in their respective careers.

Despite respecting each other, they are not friends, which makes pictures of them in the same environment unusual.

It happened at awards in which both participated and also in matches in which they faced each other not in chess, but on the pitch – Messi was an athlete for Barcelona for many years, and Cristiano Ronaldo, for Real Madrid.

In this Cup, there is a chance of a meeting on the field, if Argentina and Portugal advance in the tournament, only in a semifinal or in the final.

In the first phase, the Argentines, who are in Group C, face Saudi Arabia, Mexico and Poland. In Group H, the Portuguese have as rivals South Korea, Ghana and Uruguay.