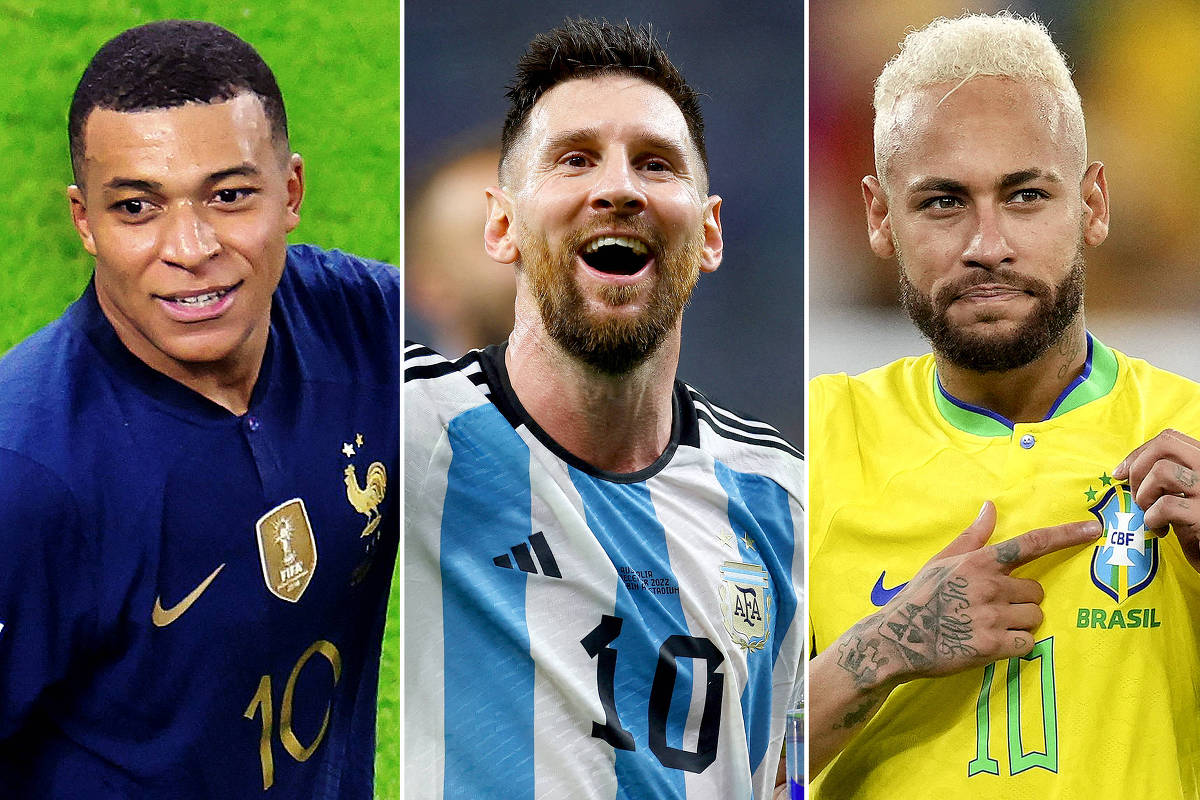 It’s hard to imagine that Argentina would have reached the quarter-finals of the World Cup without Lionel Messi, 35.

France are not dependent on Kylian Mbappé, 23, but his brilliance makes them title favorites.

Neymar, 30, took a while, but his last appearance for Brazil showed how important he is to the national team.

The trio that works together at Paris Saint-Germain landed in Qatar with the expectation that one of them would be the great star of the World Cup, although other names were also quoted.

After the group stage and the round of 16, each one built a different history in the competition, with the Argentine and the French ahead of the Brazilian in the race for the individual prize.

In addition to being the tournament’s top scorer, with five goals, the French number 10 has been noted for his goals in the competition.

There were two against Poland, in the round of 16, with shots that surprised even the great goalkeeper Wojciech Szczesny in the 3-1 victory.

Counting the passes he gave to his teammates, that’s a total of seven participations in French goals.

He could have done more, but he was rested in the last round of the group stage and only entered the field in the final part of the duel with Tunisia, the only one in which the Europeans were defeated, by 1-0.

In the other games in which he started (Australia, Denmark and Poland), Mbappé was named the best player of the match. He has been as decisive as he was in 2018, when at 19 he shone in the conquest of France on Russian soil, when he scored four goals.

With nine goals in all at World Cups, he became France’s second-highest goalscorer in the history of the tournament, behind Just Fontaine, who has 13.

His goals in Qatar were essential to avoid an Argentine embarrassment in this edition after the surprising defeat in the debut against Saudi Arabia.

There was a risk that the South American team would be eliminated in the second round, but with a goal and an assist from the number 10, Argentina beat Mexico 2-0 and stayed alive. The vacancy came in the last round, with a 2-0 victory over Poland, the only game in which he did not score a goal in the Cup, but it was important for his performance.

So much so that he was voted man of the match in all of the Argentines’ games at the World Cup. In the last of them, against Australia, when he completed his thousandth game as a professional, he was masterful in the 2-1 victory. It was he who opened the way to victory.

While Messi and Mbappé accumulated brilliant performances in the competition, Neymar saw half of the Brazilian team’s games in this Cup from the hotel where the team is staying.

In his debut, against Serbia, in addition to having a lackluster performance, he suffered an injury to his right ankle that took him out of combat in the duels against Switzerland and Cameroon.

The physical problem put his continuity in the competition at risk, in addition to raising doubts about what conditions he would play in if he recovered in time to play again.

Without him, Brazil beat the Swiss and, with the place already assured, lost to the Cameroonians, when they played only with reserves.

Only in the round of 16 did shirt number 10 perform at the height. Against South Korea, in addition to a penalty goal, he made good plays and even “earned” an assist, as FIFA considered a slight deflection he gave the ball as a pass when trying to finish a cross by Raphinha. Vinícius Júnior completed the goal.

In the race against Messi and Mbappé for recognition as the best in the Cup, however, the Brazilian number 10 ended up being harmed precisely because he only actually appeared in the last game.

In the Brazilian national team itself, names like Vinícius Júnior and Richarlison were more important to the team throughout the competition than the PSG athlete.

The knockout sequence, with the most difficult games in the quarterfinals, semifinals and final, however, could make Neymar balance this dispute with his teammates from the French team.

In the quarterfinals, he will face Croatia, this Friday (9), at 12h (Brasília time). Messi will also play on the same day, at 4 pm, against the Netherlands. Mbappé’s challenge will be on Saturday (10), at 4 pm, against England.

Advancing to the semifinals with a good performance is essential for anyone who wants to be elected the best player in the World Cup. The dispute for the prize promises good emotions.

Facebook
Twitter
Pinterest
WhatsApp
Previous article
Croatian Gvardiol, Guardiola of defenders, is a challenge for the Brazilian team
Next article
US wants to stop Microsoft from buying Activision