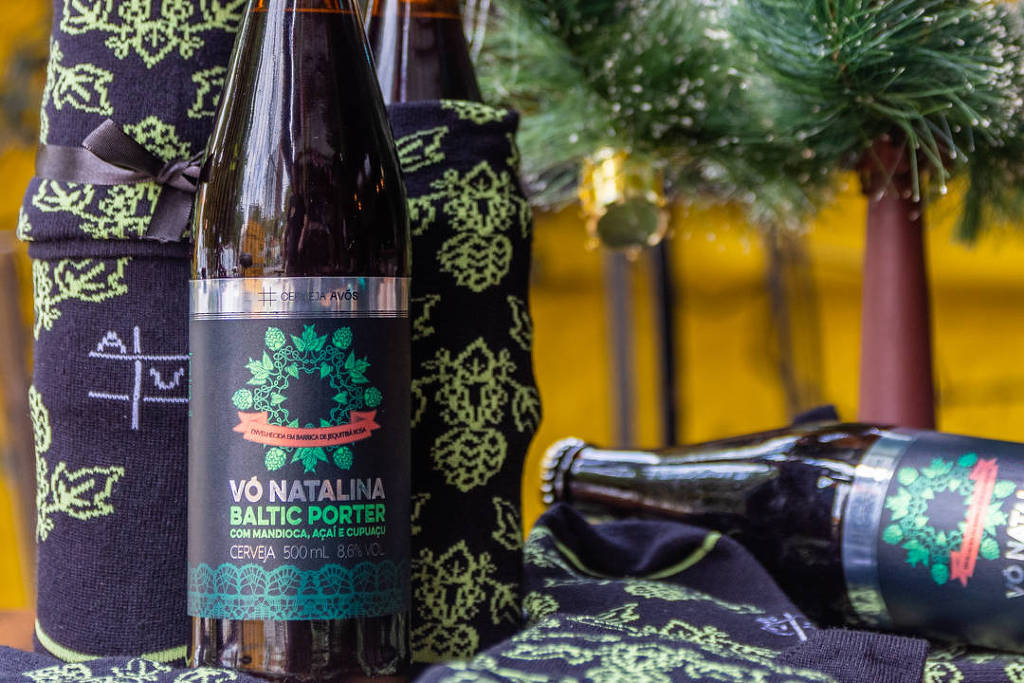 Sandro Macedo: Check out great beer suggestions to give as a gift this Christmas

A simple beer can be a nice Christmas or holiday gift. Also because, from simple, the suggestions below have nothing.

Many craft breweries offer kits on their e-commerce pages, such as Tarantino, where a pack of two cans and a glass can cost R$63.99.

At Cerveja Avós, which specializes in lagers, there are two great suggestions: a Christmas label (a Baltic porter with cassava and açaí), which can even be bought with a Christmas stocking (grandma’s face); or a kit with a beer in honor of Argentina, taking advantage of the World Cup atmosphere (but there are also French, Spanish and Brazilian). Check out the tips below.

Every year there is a special Baltic porter of Cerveja Avós with the signature of Junior Bottura. Vó Natalina is a dark, intense beer that includes cassava, açaí and cupuaçu and is aged in Jequitibá-rosa barrels. Super malty, with notes of chocolate, nuts and raisins, it has 8.6% alcohol in a 500 ml bottle. The beer alone costs R$79, but there is a kit on the website that comes with a pair of socks with hop flowers, for R$119.

Still in the World Cup mood, the suggestion is the Grandparents of the World kit, with eight beers that make references to different countries: Brazil, Argentina, Uruguay, France, Spain, England, Germany and even Italy (which was left out of the World Cup, but won a just beer). Abu is the Argentine, a red IPL with the addition of Malbec red wine and Argentine hops, with an amber color and 6.5% alcohol. There is also the Uruguayan Abuela, with yerba mate, the English Nana, with black tea, and the Spanish Yayá, with Jerez, among others. The kit with eight cans in a wooden box includes a package of toasted peanuts and a glass, for R$ 260. But it is possible to put together a smaller, separate kit.
Casa Avós – Rua Crota, 703, Vila Ipojuca, tel. 3672-4282, @cervejaavos; or on the website: avosemcasa.com.br/cervejaavos/

The largest factory-bar in São Paulo has special packaging with which consumers can assemble two options for kits: with three cans of 473 ml or with two cans and a glass. Prices start at R$63.99 and can increase according to your beer choices. There are classic Tarantino labels, such as Miracle IPA (R$ 23.10) or ZN Lager (R$ 17.33), and more creative ones, such as Manga IPA (R$ 31.19) or Sour Abacaxi Amburana (BRL 31.19). The brewery also offers accessories such as t-shirts and pins, for those who want to spice up the gift. Finally, you can also buy fresh draft beer from the growler. Then there are options that have just been picked up, such as Sour Jabuticaba Bálsamo, pink in color and aroma and flavor of jabuticaba, for R$ 45 (1 liter growler).
R. Miguel Nelson Bechara, 316, Limão, tel. 3297-7181, instagram: @cervejariatarantino; or on the website deliverydireto.com.br/cervejariatarantino/

The beer launched this December celebrates the eight years of the artisanal Dádiva. But the two labels are also a great suggestion for toasting parties, including New Year’s Eve. There are two blended beers (blended) with natural wines from the Valparaiso winery, one with Chardonnay and the other with Pinot Noir. Both have the same base, a Belgian strong golden ale, with 9.7% alcohol. In a 750 ml bottle, it can be found in specialized stores, such as EAP (for R$84 each), or on the brewery’s website.
Empório Alto dos Pinheiros – R. Vupabussu, 305, Alto dos Pinheiros, tel. 3031-4328; Gift Instagram: @cervejariadadiva; website: brewerydadiva.com.br/loja

At 12.3% alcohol, this beer can drive even Santa Claus crazy (drink in moderation). It is a dense imperial stout, with hazelnut, cocoa, spices such as cinnamon and a touch of vanilla. Practically a liquid chocotone. The beer, in limited edition, is from Captain Brew, from Minas Gerais, and can be found at EAP, in 500 ml bottles (for R$ 56).
AND AP – R. Vupabussu, 305, Alto dos Pinheiros, tel. 3031-4328