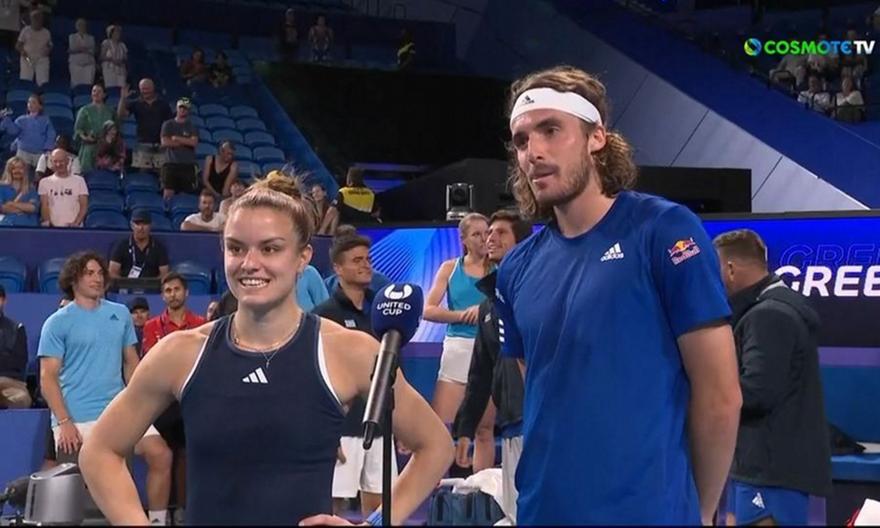 Sakkari on Tsitsipas: “We know each other very well and have excellent chemistry!”

Our national team qualified for the semi-finals of the United Cup, then its victory Stefanou Tsitsipas and her Maria Sakkari in the mixed doubles on her Croatia (3-2) and Borna Gojo and Petra Martic.

With their statements after the end of the race, the Greek athletes appeared happy, while at the same time they emphasized how it isproud about the course of our representative group, with Tsitsipas saying that:

“I’m happy we did it. I’m proud of the team. We are fighters, it is what defines us. This first big step we took here in Perth will be unforgettable. I’m glad we started in Perth, with the Hopman Cup a few years ago. Let me just say, we may go to Sydney, but our hearts remain here in Perth.”, said Stefanos Tsitsipas.

Maria Sakkari, in turn, stated that: “I’m so happy and proud of this team, I can’t put it into words. When we came to Perth for the first tournament of the year, we didn’t know what state we were in, but I think we saw that we are in very good shape.

I think our first mixed doubles was on this court. We know each other really well and have great chemistry on the court and I think that’s the key. Of course, the more we develop as players, this is something that makes us play much better in mixed doubles”, he emphasized regarding the “chemistry” he has with Stefanos Tsitsipas.