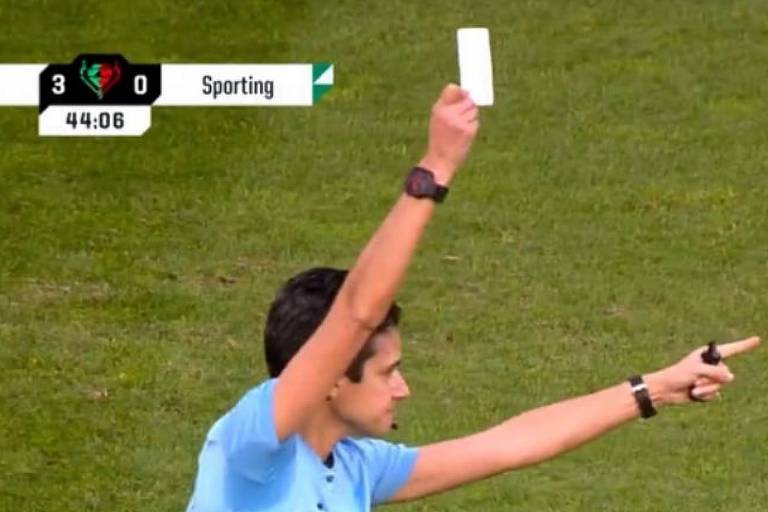 The World is a Ball: Portugal creates and uses the white card, an unofficial element in football

Ask anyone with minimal football knowledge: “How many cards are present in the game”? The answer will be: “Two”.

“What are your colors?” is the next question, also not very difficult. “Yellow and red.”

The third question: “What is each one for?”. Without going into much depth, the answer is: “Yellow is a warning, a warning, an alert. Red is expulsion, exclusion from the match”.

Used since the 1970 World Cup, they are displayed by the referee in cases of hard fouls, complaints, indiscipline.

Until this week, I (and possibly you too) only knew about the existence of these two cards in football.

Which is unofficial, not in the rules, not endorsed by FIFA or Ifab (the body that regulates the laws of sport). Which was created in Portugal, in 2018, by the country’s government, via the National Plan for Ethics in Sports, and adopted by the Portuguese Football Federation.

And that appeared for the first time to the world on Saturday (21), in Benfica 5 x 0 Sporting, for the quarterfinals of the women’s Cup of Portugal.

Near the end of the first half of the Lisbon derby played at Estádio da Luz, it became known that a fan who followed the game in the stands was having a health problem.

Immediately, the doctors of the two teams moved towards the place and jointly provided assistance to the person who had a sudden illness.

After the scare, with the professionals returning to their proper positions on the field, much applauded by the audience of 15,000 fans, an unusual and unprecedented scene was seen inside the lawn.

The referee Catarina Campos, 37, took a white card out of her pocket, lifting it and showing it to the doctors. That done, more applause from the public, who, whether they understood the gesture or not, appreciated and approved it.

The white card is intended to convey the message of an act of “fair play” during the match. In this case, the action of the doctors of the two teams in relation to the fan.

Fair play is translated as “fair play”, but in this situation, that of the white card, its use gains scope, relating to an admittedly ethical and dignified conduct, of outstanding professionalism, of immediate and vital assistance to others.

It is curious that only five years after the introduction of this novelty in Portugal did it appear.

Was there nothing in that period that deserved a white card? Or did the majority of referees consider the device “unimportant”, not even taking the “color of peace” card to the field?

Catarina Campos remembered it, decided to use it, gained spotlight for its pioneering spirit. It may have inaugurated a new era, in which the white card will become more seen in Portugal and, perhaps, be adopted in other countries.

It just cannot be used routinely, but only in peculiar situations, so that it does not become banal and unworthy of due attention.

Facebook
Twitter
Pinterest
WhatsApp
Previous article
Bad weather: “Limit your movements” warns the fire department – The areas to be sent 112 messages – Where will it snow
Next article
Mastrad: The kitchen utensil pro Mastrad is restructuring and launching a capital increase